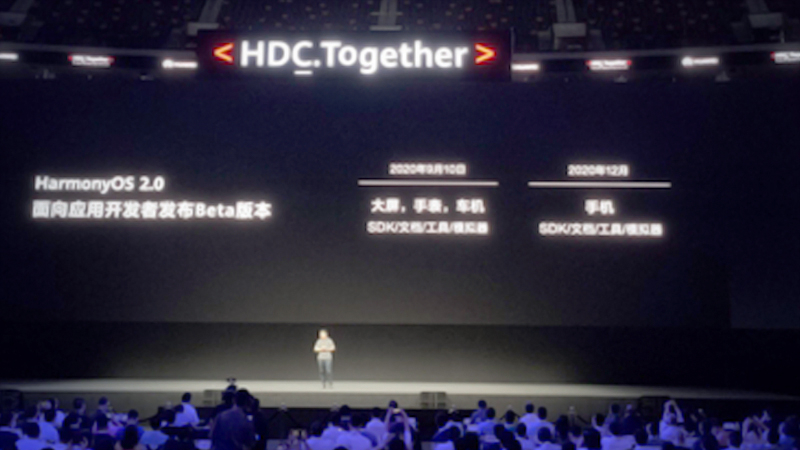 Huawei to use own operating system in 2021 on smartphones

Huawei Technologies Co said on Thursday that its in-house operating system HarmonyOS will be used in smartphones next year, marking a breakthrough in Chinese companies' efforts to commercialize self-developed operating systems and to build their own globally competitive software ecosystems.

Analysts said the increasing use of HarmonyOS showcases Huawei's resilience and technological prowess, but challenges still exist as the latest US chip bans weigh on Huawei's smartphone business.

Yu Chengdong, CEO of Huawei's consumer business group, announced the system update HarmonyOS 2.0 at its annual developers' conference on Thursday in Dongguan, Guangdong province, and said the system will be used in its smartphones next year.

HarmonyOS was unveiled a year ago, after Washington restricted Huawei from using Google's Android operating system. HarmonyOS is arguably the biggest push by Huawei to build its own software ecosystem, and it is already used in Huawei's smart TV products.

With the upgrade of the system, HarmonyOS will be used in smartwatches, personal computers and other internet of things devices later, Yu said.

The progress came after the US government expanded a series of chip restrictions on Huawei in the past few months that have limited its access to semiconductor components and equipment produced by companies using US technology.

Jia Mo, an analyst at market research company Canalys, said the tightened restrictions will result in a shortage of chips for Huawei to produce enough smartphones next year, which will make it difficult for the company to popularize HarmonyOS on its handsets.

But the US government is also facing mounting pressure from the country's own semiconductor association and chip companies. This may force it to relax the regulations in the near future, experts said.

Gao Feng, a spokesman for the Ministry of Commerce, said on Thursday that as China is a major global manufacturing powerhouse of electronic products, its demand for semiconductors has been growing steadily, and the nation has become a major driving force of the global semiconductor market.

Boston Consulting Group said in a report that if the US government increases restrictions on semiconductor trade with China, this could endanger the country's own position as a leader in the sector.

BCG warned that if shipments of US chips and chipmaking equipment to China were stopped, and China were to ban imports of US electronics and software, it could cost US companies 37 percent of their annual sales.

To cope with Washington's restrictions on the use of Google Mobile Services, Huawei has also been working hard to build the ecosystem for Huawei Mobile Services, better known as HMS, which is the foundation of its ability to sell smart devices in overseas markets.

Huawei said the mobile applications integrated with HMS so far have exceeded 96,000. The number of developers of HMS now stands at over 1.8 million.

Charlie Dai, principal analyst at market research company Forrester, said: "The US government's bans leave Huawei no choice but to accelerate research and development to build an open tech ecosystem of its own, from hardware to software for smartphones. It's a tough journey but Huawei must go through it to survive and thrive."

He said Huawei has made substantial technological progress in areas like audio, video and augmented reality for HMS, which effectively drives the growth of its developer ecosystem.

But currently, the growth is chiefly driven by domestic app developers, and more efforts are needed to attract overseas developers to embrace HarmonyOS and HMS, said Xiang Ligang, director-general of the Information Consumption Alliance, a telecom industry association.

"Huawei has no choice but to continuously strengthen its products and grow its ecosystem. That will also be the pathway for most Chinese companies to compete in the global arena, as Washington intensifies its crackdown on Chinese technology enterprises," Xiang added.