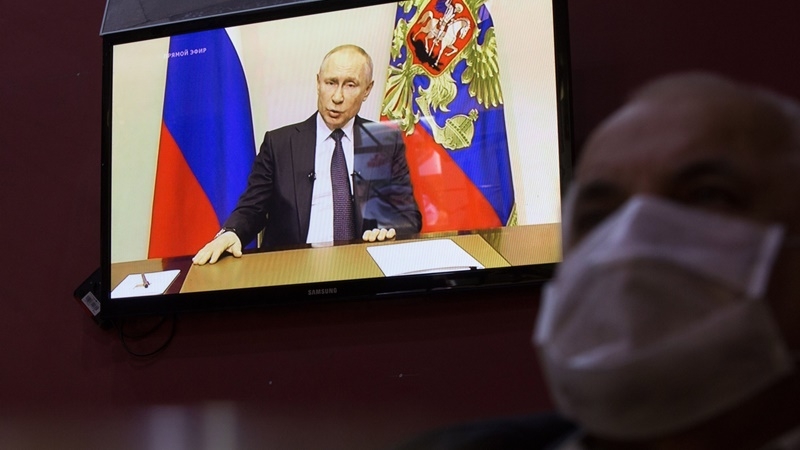 Putin faces test of voters with poisoned critic in hospital

With his most prominent critic hit by a near-fatal poisoning that opponents and the West blame on the Kremlin, President Vladimir Putin faces a key test of support in regional elections ahead of a national vote next year.

About a third of the electorate is eligible to vote in balloting that is being held over three days starting Friday to choose representatives at different levels of government in 83 regions including 18 governors.

The contest takes place amid unprecedented anti-government protests in neighboring Belarus and daily demonstrations since July in Russia's far east Khabarovsk region over the arrest of a popular governor from outside the ruling party. The authorities are taking all possible measures to limit opposition gains, analysts say.

"The Kremlin sees a real threat," said Vladimir Gelman, a political science professor at the European University in St. Petersburg.

Putin, 67, has pushed through constitutional changes that allow him to extend his two-decade rule to as long as 2036. Still, his popularity plunged to a record low earlier this year after a collapse in oil prices and the Covid-19 pandemic triggered a recession that may shrink the economy by around 4% in 2020.

Opposition leader Alexey Navalny was working to build support for candidates opposed to the ruling United Russia party when he fell victim in Siberia last month to what German doctors later identified as poisoning by the military nerve agent Novichok. He emerged Monday from a coma in a Berlin hospital, where he'd been flown for treatment.

Navalny has built a following of millions with online videos exposing high-level corruption in Russia. Despite pressure from European leaders, Russia has so far failed to investigate the case, asserting it has no evidence the 44-year-old campaigner was poisoned.

In a video shot during his Siberia trip and released after he was hospitalized, Navalny appealed to viewers to adopt his "smart voting" initiative to support the politician in each area with the best chance of defeating the United Russia candidate. The party lost a third of its seats when the tactic was promoted in last year's Moscow city council elections.

His campaign this time urges votes for around 1,150 candidates in municipal contests as a rehearsal for autumn 2021 elections to the lower house of parliament. It's also fielding candidates in a handful of regions including Novosibirsk and Tomsk.

The "poisoning could spark a major backlash that would seriously accelerate the erosion of the regime's support," Ivan Zhdanov, who heads Navalny's Anti-Corruption Fund, said in an interview in its Moscow office.

Putin's spokesman, Dmitry Peskov, said the Kremlin isn't concerned Navalny's illness may affect the vote. "There are no such fears," he told reporters on a conference call Friday.

Putin remains far more popular than United Russia. His rating increased in August by six percentage points to 66%, according to the independent Moscow-based pollster Levada, as economic activity resumed with the easing of lockdown measures against the coronavirus. United Russia's support stands at just above 31%, according to the state-run Russian Public Opinion Research Center, or VTsIOM.

While the authorities have made it hard for opposition candidates to register, incumbent governors still face an uphill struggle in half a dozen regions. They include Irkutsk, where dissatisfaction runs high over disastrous floods last year and Arkhangelsk, where protests aborted plans for a landfill site.

Election monitors warn the decision to hold three days of balloting this time, including online voting, will make fraud harder to detect. Watchdog Golos said the elections are taking place in the "worst legal framework in 25 years."

Navalny's staff have complained of attacks, including in Novosibirsk when several volunteers fell ill after assailants threw a bottle containing a harmful substance into their office on Sept 8.

Despite the pressure, the opposition may demonstrate that it can be a "major obstacle to the Kremlin's control" of parliament, where United Russia holds a two-thirds super-majority, said Nikolai Petrov, a fellow at the London-based Chatham House think tank. "In 2021, the situation will be far more critical for the authorities."