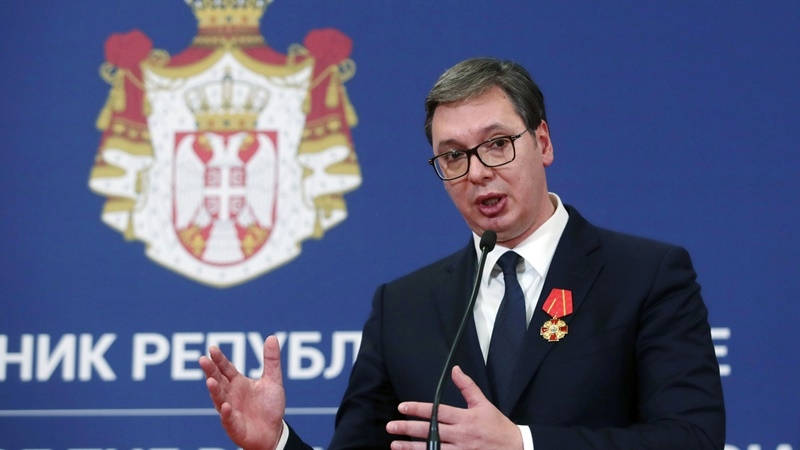 Trump-brokered deal puts squeeze on Serbia over China and Israel

A U.S.-brokered agreement with Serbia and Kosovo ran into difficulty a week after it was signed, as Serb President Aleksandar Vucic raised questions over its implementation.

While the core of the accord signed in Washington Sept. 4 is on "economic normalization" between the Balkan neighbors, it includes provisions committing Serbia to move its embassy in Israel and on 5G networks that could harm Serbia's close ties with China.

In an 80-minute interview on Thursday evening, Vucic said that Serbia will follow through on its commitments but cast doubt on the timing and execution of the embassy plan.

The agreement brokered by President Donald Trump, which has not been made public, includes provisions on transportation links, trade relations and energy. However, a copy seen by Bloomberg shows that it also carries political terms apparently unrelated to bilateral relations, including a commitment by Serbia to open a commercial and government office in Jerusalem on Sept. 20 and move its embassy to the city by July 1, 2021.

That would follow the Trump administration's lead in shifting the U.S. embassy from Tel Aviv after recognizing Jerusalem as Israel's capital, a move rejected by most other nations and the European Union. Kosovo is also to recognize Israel under the deal's terms, which may complicate its own efforts to increase the number of states that recognize it as an independent and sovereign nation.

The accord places the Serb leader in a predicament on several fronts. Vucic has for years played a balancing act between Russia, China, the U.S. and European leaders including Germany's Angela Merkel. A deal that normalizes political ties is crucial for both Serbia and Kosovo to progress on the path toward EU membership, yet China and Russia back Serbia's opposition to Kosovo's independence.

"Vucic is clearly maneuvering, changing main political partners as it suits him," Florian Bieber, the director of the center of South East European Studies at the University of Graz said Thursday. "Six months ago he was very tight with China, during the protests in Belgrade he was very European, and now he is American and against China."

China has become one of the largest foreign investors in Serbia, which is part of President Xi Jinping's Belt and Road Initiative.

But the deal commits both parties to "prohibit the use of 5G equipment supplied by untrusted vendors in their communications networks." That is standard language used by the Trump administration to refer to companies such as Huawei that it says has links to the Chinese Communist Party. Huawei denies any such links.

Serbian Minister of Trade, Tourism and Telecommunications Rasim Ljajic told reporters last year that Serbia wants to join China on the "digital silk road," implementing 5G technology as soon as this year. Huawei is one of the major suppliers to state-owned Telekom Serbia, and the Chinese company is helping Belgrade's ambitions as a "smart city."

"China has treated 5G decisions as litmus tests for their bilateral relationships, so it's not something that Vucic could pursue without serious ramifications," said Andrew Small, a senior transatlanic fellow at the German Marshall Fund of the United States' Asia program. Even so, the accord is "a general expression of intent using language plucked from other U.S. agreements, signed in a very rushed process."

That leaves the Serb president wiggle room "to provide appropriate reassurances to the Chinese side," he said.

Asked in the interview whether the agreement would create difficulties with China and its 5G technology, Vucic dismissed the question. "Where does it say China is a problem?" he said.

Serbia came under pressure from the EU this week to drop out of a military drill with Russia and Belarus, then canceled all military operations with partners. Serbia refuses to recognize the sovereignty of Kosovo, which declared independence in 2008, nearly a decade after NATO forces drove out Serb forces from the territory.

Vucic, who discussed the accord with Vladimir Putin this week, said the Russian president "shows respect for our situation."

That's an improvement from last weekend, when a Russian Foreign Ministry spokeswoman apologized after she drew a rare public rebuke from Vucic for mocking him in a social media post when he signed the deal in Washington.

In questioning aspects of the White House accord, Vucic is "buying time," said Bieber at Graz. "If Trump loses the election, the whole thing is off the agenda."

Vucic made clear that Serbia will honor its obligations even if Trump loses to Democratic candidate Joe Biden on Nov. 3 -- a scenario he said he doesn't see happening.

"I'm convinced Trump will win the election" despite the "tremendous campaign that is waged against him," he said.