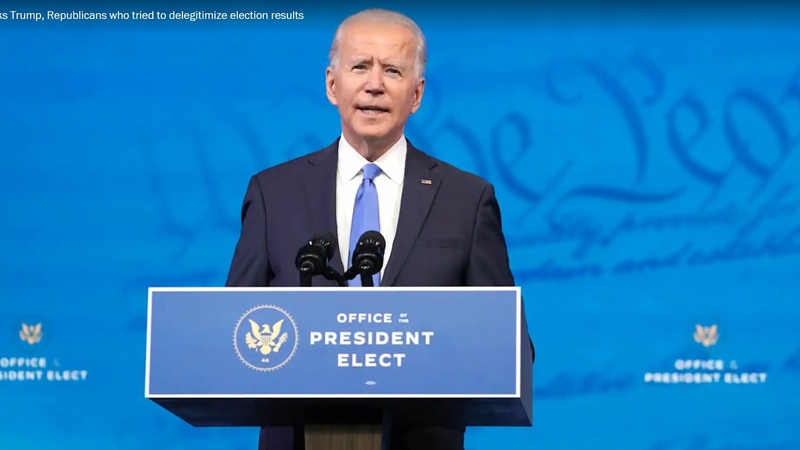 Could Trump declare martial law to try to steal the election?

He's thought about it. He's hosted political and legal outcasts at the White House to talk about it.

Could President Donald Trump declare martial law, or seize voting machines, or try to otherwise steal the election by force in his last month in office? Any of those would be an extreme escalation of Trump's already unprecedented strong-arm tactics in his effort to overturn the election results.

The answer is no, he can't do this stuff, say various national security and election law experts.

But even if these maneuvers aren't in the president's tool kit, it's dangerous for him to talk about them in a way that risks normalizing them - let alone in Oval Office meetings, said nearly every expert The Fix spoke with.

"This is really dangerous stuff to start playing with," said Rachel Kleinfeld, a national security expert at the Carnegie Endowment for International Peace. "You cannot normalize extrajudicial action outside the rule of law and believe democracy will hold. Democracies are fragile, even ours."

But even if Trump could do any of the things he might be entertaining, they wouldn't actually change the election results: Here's what he's mulling, according to Washington Post reporting, and why experts say these efforts won't get him what he wants.

What this would do: Trump would put the military in charge. It would implement and enforce curfews, keep people in their homes. Former Trump national security adviser Michael T. Flynn has suggested the military could force states to rerun elections. It could even stop members of Congress from coming to work on Jan. 6 to certify President-elect Joe Biden's win.

Could it happen? No, experts say. There's absolutely no legal or political precedent for it. "Can the president invade the Congress of the United States? No, he cannot," said Adav Noti, an election law expert with the Campaign Legal Center.

"If you have martial law," Kleinfeld said, "you have total suspension of the Constitution. So that's a coup, and a coup in this country is not going to happen."

Trump would also need military buy-in, and military leaders have said they're not interested in entertaining any of these ideas. Experts were heartened that military leaders expressed regret for participating in a clearing of peaceful protesters outside the White House this summer so the president could pose for a photo he used for political purposes.

Also, declaring martial law wouldn't do anything to change votes. What is a curfew in December going to do to change an election in November? States aren't going to redo elections. And even if Congress were unable to certify results, on Jan. 20, the political and legal and military establishment would almost certainly recognize Biden as president. The military could just escort Trump out of the White House on that day if he refused to leave.

After reporting over the weekend that he was briefed on this idea by fringe advisers, Trump tweeted this, throwing cold water on the idea.

Trump has called plenty of accurate reporting "fake news" before, so it's not the same as an outright denial.

2. Use the Insurrection Act to somehow get control

What this would do: This is slightly different from martial law in that it's an actual legal tool the president has that allows him to use the military in extreme ways. The Insurrection Act allows the president to call in troops for domestic law enforcement, not unlike what he did this summer in Portland, Ore., during Black Lives Matter protests. It's supposed to be used only in times of emergency.

But what emergency is there right now that would warrant the military taking to the streets? There is none. Trump could try to gin one up by encouraging protests across the nation on Jan. 6 as Congress certifies results, said Meredith McGehee, an expert in ethics in politics and the director of Issue One.

To that end, Trump allies are planning a rally in Washington that day. Trump is encouraging them: "Big protest in D.C. on January 6th. Be there, will be wild!" he tweeted last week.

That's scary language, said McGehee, who wondered whether Trump might try to do this in several cities to create the pretense of insurrection and chaos. "Now we have a president who is playing with the notion that we are going to solve conflict with violence," she said. "That puts us up there truly with the banana republics."

But this tactic would almost certainly face legal challenges and political blowback. "Talk about an idiotic idea," Republican strategist Karl Rove recently said on Fox News. "There's no ability for any president to invoke the Insurrection Act of 1803, claiming that the issue has got to do with the hubbub around the election."

And just like declaring martial law, it wouldn't actually change Trump's results. The Insurrection Act "says nothing about: 'Therefore the president can stay in power after he's been voted out in a legitimate election,'" Kleinfeld said.

What this would do: It's unclear, honestly. It's an idea that's been floated to the president on the basis he could somehow try to prove baseless claims that voting machines counted votes incorrectly, or that they were somehow hacked by communist countries.

But those claims been disproved. In Georgia, the Republican secretary of state has presided over three recounts, including one by hand, that confirmed the machines counted votes correctly. An Arizona judge allowed Republicans to view 100 ballots to search for fraud or miscounting, and they found nothing.

"We're at a point where the votes have been counted," Noti said. "The machines are done. There was no fraud."

Also, this is illegal without states' permission. The Constitution gives states the authority to run their own elections as they see fit. Taking the voting machines would fall to the Department of Homeland Security, and its head, Chad Wolf, has told the White House he's doesn't have the authority, according to Post reporting.

4. Set up a special counsel to investigate voter fraud

Trump has toyed with putting one of the most conspiracy-theory-minded lawyers in his orbit, Sidney Powell, into an official position to "investigate" whether there was fraud that led to his loss.

What this would do: Not much.

For one, it doesn't seem like she'll find anything. In six states he lost, officials have found just a handful of incidents worth investigating - nowhere near the tens of thousand of votes Trump would need to overturn his loss. The courts have nearly universally rejected his claims as well.

Two, she wouldn't have much time. A special counsel can't be removed by the next president, but a Biden Justice Department could just silo her and give her zero resources.

Three, the Justice Department would need to implement this, and it's not clear Trump has that support. Attorney General William P. Barr said on his way out the door this week that he saw no need. His replacement, Jeffrey A. Rosen, hasn't commented on this.

But unlike with declaring martial law, the president leaned into this idea in a tweet Wednesday.

Of all the ideas floated out there, this one is the flimsiest, experts said. (But they stressed that they are all infeasible.) "Like all the post-election litigation by the president's team, it's all half-baked ideas that don't have a basis in law and don't have a basis in fact and don't have any chance of success," Noti said, "however success is defined other than whipping some portion of the American public into a frenzy."

5. Have Congress protest the election

What this would do: Again, nothing to change the election results. But this is one of the only ideas Trump has considered that he could legally do.

When Congress meets Jan. 6 to confirm Biden's win, Trump has lined up several House Republican lawmakers to challenge as many as half a dozen states he lost. But they won't actually succeed in changing the outcome. They don't have support yet from a Republican senator, and without that, their objections die immediately.

If a Republican senator does join in - potentials include incoming senator Tommy Tuberville of Alabama or Sen. Rand Paul of Kentucky - Congress has to debate and vote on their challenges. Lawmakers will almost certainly vote them down, even the Republican-controlled Senate. Sen. John Thune, R-S.D., the No. 2 Senate Republican, has said these challenges are "going down like a shot dog." There's no legal basis not to accept state's electors that, taken together, make Biden president.

So all of this talk about possible actions is just that: talk. And Trump will probably continue to talk, and tweet, about the election up to noon on Jan. 20, at which point he will be the former president.