OAKLAND, Md. - Mark Boucot learned the rural hospital he runs would be left out of the initial vaccine distribution a few days before covid-19 killed his first staff member.

It seemed hope would be slow to reach the Garrett County mountains, just like everything else.

The pandemic initially skirted this eastern edge of Appalachia, but arrived with a vengeance in November. Case rates soared to four times the state average. The small emergency room at Garrett Regional Medical Center, where Boucot is president, was hammered. Coronavirus patients consumed nearly half the hospital's beds and all of its four-bay intensive care unit.

Isolated in the farthest stretch of Western Maryland, residents did what they could to prepare for the virus, even when the pandemic seemed impossibly far away. But their community was overwhelmed when it materialized. The region's treasured independent streak didn't help matters. Locals have been reluctant to distance themselves from family members, slow to admit they are weakened with infection, and - in seven out of 10 cases - unwilling to get a vaccine.

All spring, summer and into the fall, Garrett County saw the pandemic on national news but not at home. It welcomed tourists escaping virus-laden cities and spent federal aid on infrastructure and economic relief rather than testing sites or an intensive campaign to warn skeptics about the coronavirus.

But as Christmas approached and the first shipments of vaccine rolled into bigger towns and cities across the country, the small hospital in Oakland was in distress. Ten people had died in 10 days, doubling the death toll in a county of 29,000. The positivity rate was 17.75%, the state's highest.

Ten percent of the hospital staff was out with the virus or quarantined, and the hospital was deploying third- and fourth-year nursing students from a nearby community college to help.

"I feel like we're a bunch of rusty tools in the garage that no one cares about," said Jeffrey Bernstein, a semiretired emergency room physician whose part-time schedule ballooned in December to more than 40 hours a week.

The hospital had provided coronavirus testing for the county since March, when the pandemic began. Now Boucot decided he no longer had the staff to both treat the sick and detect the infected.

The county had to create a new testing method, and settled on a new state-run site that operates two days a week on an isolated stretch near the airport, staffed by school nurses whose classroom buildings had been shut down a few weeks earlier.

"We had people laying around the lab testing area waiting," Boucot said. "We're overrun at this point. We can't keep up with it." 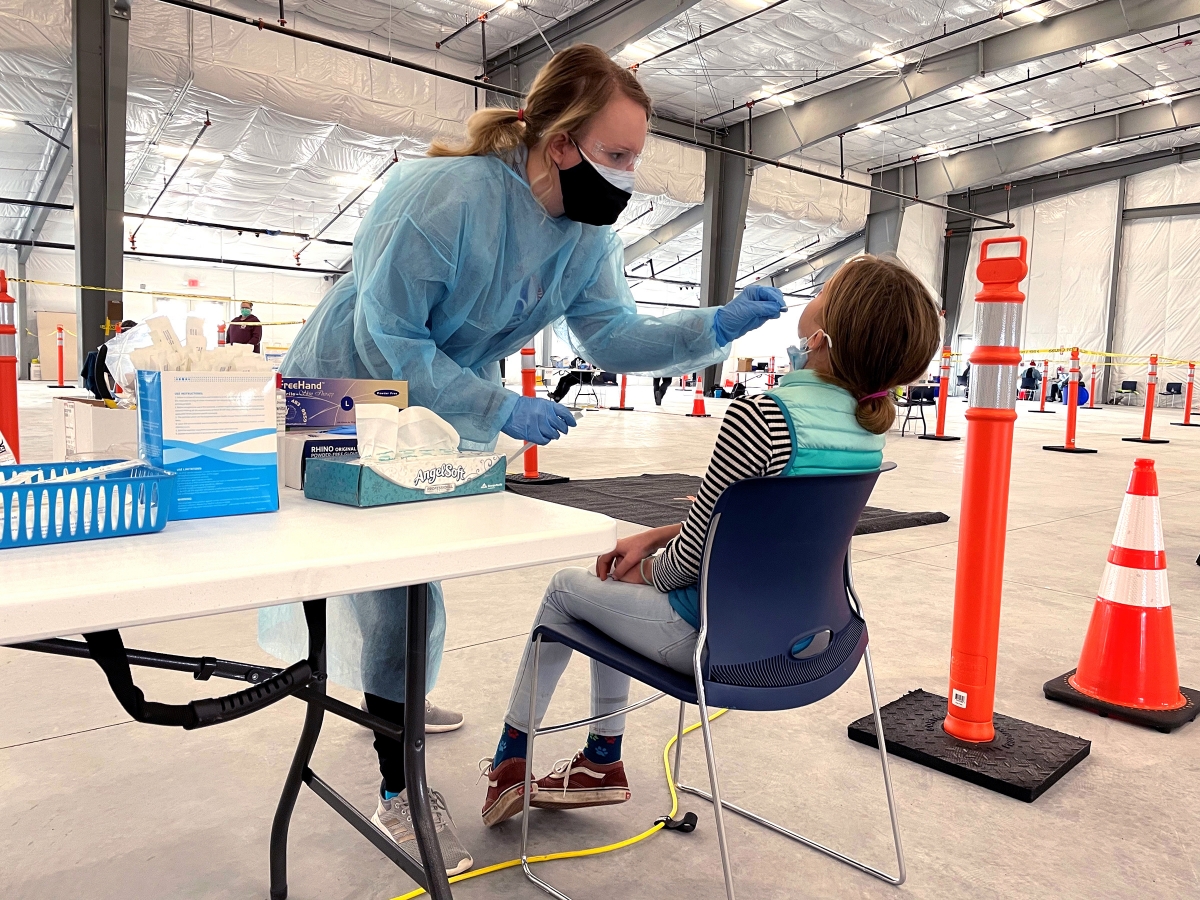 Garrett's economy relies on agriculture, small business and tourism that draws Washington- and Baltimore-area residents to its wooded back country, state parks with waterfalls, ski resorts and Deep Creek Lake. The pandemic brought more people than ever to rent houses and buy vacation homes; county officials say 2020 set a record for both hotel taxes and real estate sales.

But some locals resented the stay-at-home orders and mask mandates, given the more-lax rules in neighboring counties in Pennsylvania and West Virginia. Television news here comes from those states, and residents missed forceful warnings about the virus from Maryland Gov. Larry Hogan (R) and others closer to Washington. Telework requirements and closed schools also caused greater hardship in Garrett than elsewhere, since fewer than 40 percent of households have reliable broadband.

While public health workers waited anxiously for the pandemic to hit, many others relied on Facebook and social media for virus-related information, plus their own observations that the county - with fewer than three dozen cases in four months - didn't seem to have a covid-19 problem at all.

"It was something we saw on TV happening in other places," said Becky Aiken, who manages the nurses for the public school system.

Garrett County Health Officer Bob Stephens said some visitors to businesses located along Interstate 68 acted "really nasty" when told to wear masks or leave. A few got physical; many were outraged.

"We have a lot of people who don't believe covid is a serious thing," Stephens said.

When cases started to rise in October, locals wanted to blame the tourists, even though Stephens insisted there was no evidence that they were responsible.

"Every time I talk to the health officer, every time, I ask him . . . Is there any data to show that the virus is being spread via the vacation industry in Garrett County?" Edwards said. "And every time I ask that, the answer is 'no.' "

Stephens said outbreaks started in two nursing homes, where 150 people got sick in two weeks, and spread from there. It seems probable that the Autumn Glory festival in mid-October followed by Halloween fueled the spike, but it's hard to tell, he added: "We went into this downward spiral because we couldn't keep up with the contact tracing."

By the end of November, the number of confirmed cases had more than tripled in just 18 days, to 755, helping to drive a statewide surge in virus cases that is disproportionately concentrated in three western counties.

The number of confirmed cases in Garrett probably understates the prevalence of the virus, officials said, given the stigma a positive test result holds in the community and the reluctance of people - in a county with one of the lowest median incomes in Maryland - to quarantine.

"Less people want to identify themselves as covid-positive, so they tend to avoid getting testing," Boucot said. "There's a little bit of an independent streak: 'That's private, that's my business.' And besides, if you're out of work for two weeks, that's it. You have no income."

Public officials sounded alarms and encouraged people to avoid Thanksgiving dinners, but the conventional wisdom is that those warnings went unheeded. Family and social gatherings are now the primary infection sources in Garrett.

"A lot of people out here are more conservative-leaning and they're not interested in the government telling people not to have family gatherings," said longtime state Sen. George C. Edwards, R, whose son, Paul Clayton Edwards, R, chairs the Garrett County Board of Commissioners. "They say - well, I can't tell you what they say, since it's not printable."

Jeff Hinebaugh, director of emergency services at the hospital and a 35-year employee, was among those who fell ill. His symptoms stayed mild - no worse than a common cold - but he was nonetheless sidelined from the busy emergency room, left fretting at home about his depleted team.

"At what point is my staff going to crumble?" Hinebaugh said. "How in the world are we going to take care of our staff? How do we deal with the stress?"

Day after day, the emergency room was filled with familiar faces. Neighbors. Parents of friends. The dad from the soccer field. A co-worker.

"The last few months have been horrible," Hinebaugh said. "When you've been here as long as I have, I know a lot of these people personally. They're looking at my eyes. . . . They're wanting to know, 'Am I going to make it?' And I don't have an answer."

The hospital, part of a two-hospital system run by Boucot and affiliated with West Virginia University, has 55 beds, 20 of which are reserved for maternity and short-term rehabilitation. In mid-December, 15 beds had covid patients. Every day, Chief Operating Officer Kendra Thayer scanned upcoming outpatient appointments and surgeries, looking for relief valves. Who was getting a knee surgery that could wait? Who could be treated at home with virtual specialists?

"We're not going to put off someone who needs cancer treatment," she said.

Several times each day, she visited the intensive care unit to see if anyone had improved enough to be transferred to a normal bed. Garrett Regional doesn't have a pulmonologist or other specialists on-site; doctors rely on remote experts at West Virginia University Medicine. An iPad and speaker attached to a pole is wheeled into ICU bays so faraway doctors can to assess breathing and collaborate on treatment plans.

"It's the things we don't always do in a rural hospital, but we can with their assistance," Thayer said of the virtual specialists. "Even when we lose someone, they say there's nothing we could have done differently."

It's at least an hour by ambulance to someplace with specialized in-person care. Thayer doesn't want members of the community to assume they'll be transferred away if they're sick; she worries it might deter people from seeking care.

"If we can keep them here, that's really for the best," she said.

It was in the tiny, quiet intensive care unit that Debra Wilt, a 30-year human resources employee at the hospital who loved to dance, died early in the morning of Dec. 12. Wilt, 59, was the first hospital staffer to die, and the third covid death in the ICU that week.

"Everybody knew and loved her," Boucot said.

He directed his grieving employees to lower the state flag to half-staff in her honor. Not long before that, he'd told them to find time to assemble the usual Christmas decorations at the hospital entrance.Santa towered over the lobby, lights wrapped the concrete posts by the receiving bay, and garland draped the gift shop, where visitors were no longer allowed.

"It was important for us to demonstrate normalcy for the staff and the community," Boucot said.

Part of the reason Garrett was among the last places in Maryland with a state-financed testing site is that no one asked for help until cases spiked.

"It's a cultural thing," Stephens, the health officer, said. "We're in Appalachia. We'll take care of our own."

When it came to vaccines, however, Garrett officials were hoping to be first, only to learn the logistics of distributing the Pfizer-BioNTech drugs meant the small county would be left out.

"It seems counterintuitive," said Edwards, the county commissioner. "It would seem that the area of the state that has the highest positivity and highest case rate would be first in line."

But the vaccine was packaged in 975-dose batches that must be kept at subarctic temperatures until used. The hospital has only 250 front-line workers, so they had to wait for the Moderna vaccine, which came in smaller shipments and would not arrive for more than a week.

Once vaccines become available to the general public, Stephens and Boucot know they will have another battle. A health department survey conducted this fall suggested as few as three in 10 people would be willing to get vaccinated.

"We have trouble convincing people to get the regular flu vaccine, which is tried and tested," Boucot said.

The job of persuading them will fall to people like Jessica Carey, an elementary school nurse who spends two days a week at the coronavirus testing site about 25 minutes from the hospital, past the one-runway airport and inside the shell of a building constructed for an economic development project that never arrived.

She and the other school nurses developed a plan with county health workers that involves Carey videotaping herself getting the shot and launching a blog diary about her experience over the following weeks.

"It'll be a video walk-through of the entire process," Carey said. "We'll educate people, because there's a lot of misinformation out there. We'll have a Q& A, and talk about the side effects we're having."

The county health department, meanwhile, will ask all the primary-care doctors in the county to make a list of patients they think should get the vaccine first, then work on registering them to getting them to the testing and vaccination site.

"They know their patients, and we don't," Stephens said. "We have to rely on our partnerships, because none of the agencies can do it on their own."