Analysis: Trump roadshow whines to a close with last hurrah

DALTON, Ga. - President Donald Trump's first words at a slick, theoretically scripted get-out-the-vote political rally on behalf of Georgia's Republican Senate candidates were neither scripted nor on behalf of the candidates.

They were about President Trump.

"I want to thank you very much. Hello, Georgia. By the way, there's no way we lost Georgia," Trump began Monday night, after the treacly Lee Greenwood anthem "God Bless the U.S.A." faded out. "There's no way."

Then it was on to familiar themes of grievance and defiance and familiar falsehoods, though with notes of melancholy, and perhaps resignation, some two months after President-elect Joe Biden's victory was sealed.

What may be Trump's final signature political rally as president felt like a grasping, wistful last hurrah. If this was the last stop on the Trump roadshow, it ended not with a bang but a whine.

"We won everything, and we won it now a second time," Trump said, after a long digression about his 2016 victory. "I hate to bore you with that expression."

He still gave the mostly maskless crowd at a rural airstrip a show - with a Marine One flyover, a booming sound system playing the Trump campaign playlist, warm-up red meat from Donald Trump Jr. and campaign surrogate Kimberly Guilfoyle, and a closing appearance from daughter and adviser Ivanka Trump.

In between, the hour-plus was filled with all the Trump iconoclasm, now no longer shocking. Baseless conspiracies! Dozens of easily disproved false claims! Internecine grudges! Casting out enemies! Threatening loyalists! Inviting an adherent of the QAnon conspiracy theory onstage! And throughout, Trump's song to himself - the only theme music that has ever mattered.

"So somebody came up to me today, Kelly, and they said, 'Sir, you're way up in four years! Nobody can come close to me!' " Trump said, as the only current candidate onstage, Sen. Kelly Loeffler, stood by.

Over and over, Trump returned to his own election and a multistate list of grievances and debunked claims of fraud. A steady stream of rallygoers made their way to the buses as Trump gave a blow-by-blow riff about alleged ballot counting irregularities in Pennsylvania, which is of course a long way from northwest Georgia.

Seemingly aware that he was straying from the purpose of his appearance, Trump more than once observed that he was only trying to warn against election fraud during the Georgia runoff elections Tuesday, which will determine whether Republicans hold the Senate.

"That's why I'm here," Trump said. "I don't want to do rallies for other people."

Most in the crowd appeared to share Trump's view about the real star of the show.

Three hours before Trump's scheduled remarks alongside Loeffler, thousands of people sat side by side in folding chairs or stood close together on the tarmac, despite public health advice to avoid close contact with others, even outdoors. The other Republican Senate candidate, David Perdue, appeared by video after a close contact with a staffer who had tested positive for the potentially deadly viral disease.

The venue was decked as for a Trump rally, with giant red, white and blue electronic signs that flashed the name "Trump" in large letters in between exhortations to vote in the runoff the following day. Smaller signs bore the Republican Senate candidates' names.

Many in the crowd wore red "Make America Great Again" ball caps. A few were wrapped in capes or blankets printed with Trump's face. One guy had a giant red foam MAGA hat with a thatch of fake orange hair.

The president issued what once would have been a remarkable threat to his running mate, Vice President Mike Pence, who will preside over the congressional certification of the election results on Wednesday, saying he hopes Pence "comes through" with unspecified (and impossible) action that overturns the results.

"Of course if he doesn't come through, I won't like him so much," Trump said as the crowd laughed.

He also raised the stakes in his feud with former ally Gov. Brian Kemp and Georgia's top election official, Secretary of State Brad Raffensberger. He blames the fellow Republicans for allowing his loss in the state.

"I'm going to be here in a year and a half and I'm going to be campaigning against your governor and your crazy secretary of state," he said to cheers.

Although he remained defiant and insisted that nothing he said should be considered a concession to defeat, Trump also appeared slightly at a loss.

He marveled that Biden, who was also campaigning in the state Monday, could be president when "he can't talk"; Biden has struggled with a lifelong stutter. Trump also mocked Biden's small motorcade and small traveling footprint, which is by design as a pandemic precaution. 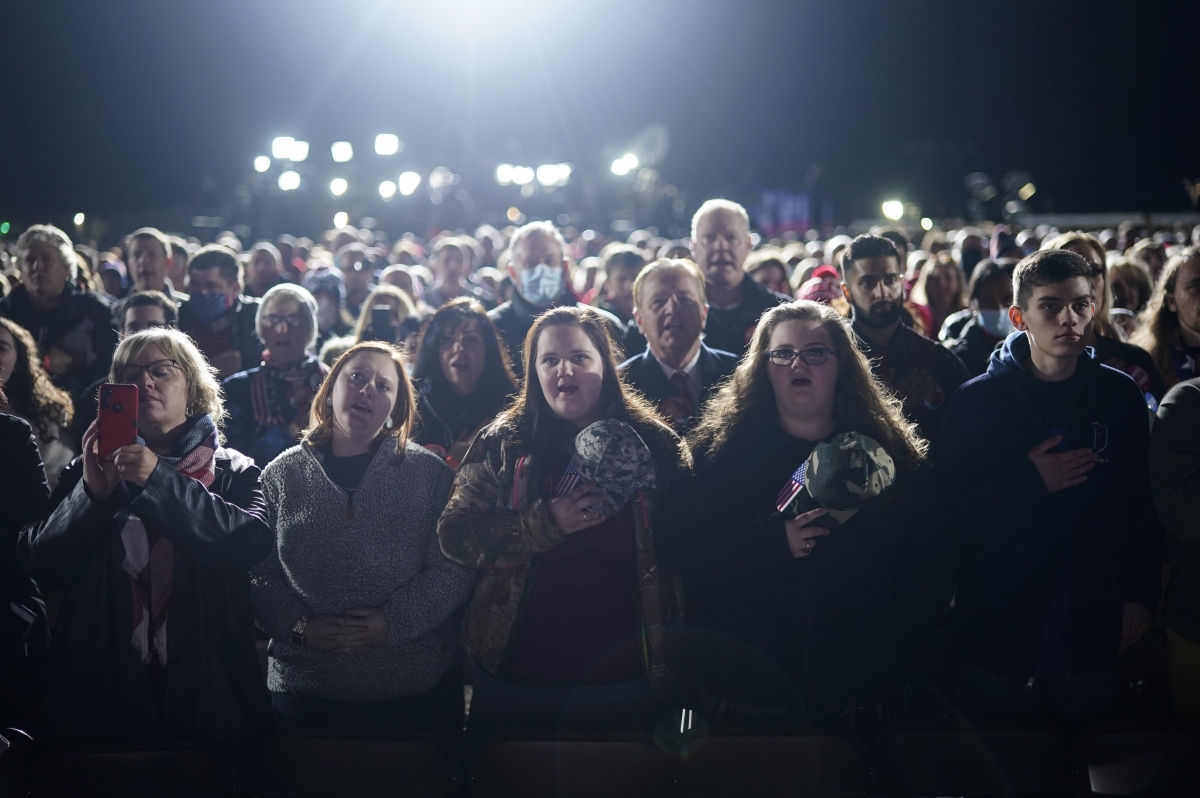 Trump also called the Georgia candidates the "last line of defense," and said that without Loeffler and Purdue, no one could stop the Democrats' agenda. That was a tacit nod to the reality that since he has lost and Pence will no longer be a deciding vote in the Senate, victories by Democrats in both Georgia Senate elections would put Republicans out of power entirely.

He promised to help Republicans regain control of the House in 2022 and to return to the state to campaign for Rep. Marjorie Taylor-Greene, the newly elected Republican who has espoused baseless QAnon theories about a sprawling government conspiracy.

"Of course, if I didn't win, you probably wouldn't want me," Trump said, his playful tone tinged with rue - and bile. "You know, an awful big difference between losing and winning and having it stolen."

Jeff Mitchell, 58, of Canton, Ga., and some friends from Florida were at the rally to see Trump. His buddies, who cannot vote in the runoff election, had stopped en route to pro-Trump demonstrations in Washington on Wednesday.

Mitchell said before the event that he can "accept defeat" if Trump lost fair and square, but he said he believes Trump has been treated unfairly. Mitchell, sounding resigned, also suggested Trump is a victim of circumstance.

"You had a perfect storm. The covid, the mail-in ballots and the hatred for Trump," he said.

Trump's speech included his standard gibes at the media, which he claimed does not report on election fraud or on his accomplishments. The crowd cheered, but without the thunder that used to accompany the president's populist attacks.

The crowd appeared underwhelmed when, near the close of the event, Trump mused about what he considers one of those accomplishments. Although he did not seal a disarmament deal with North Korea's dictator, Trump cast the gambit in his usual, highly personalized, terms.

"I got along very well with Kim Jong Un," Trump mused, the past tense not lost on anyone. "I don't think that Joe's going to, based on what I've heard."

By the end, with the music booming and Trump's armored limousine idling to drive him the short distance to his presidential helicopter, Trump wandered the stage for a few awkward moments.

He tacked one way, pumping his fist, then the other, a sort of grimace on his face.

Reopening of Phuket, Surat Thani gets initial nod from CCSA

Reopening of Phuket, Surat Thani gets initial nod from CCSA