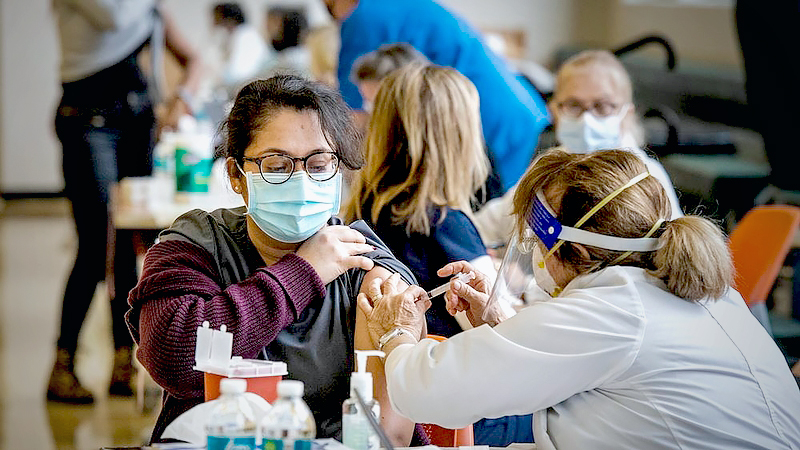 Gov. Larry Hogan announced Tuesday that he will deploy the Maryland National Guard to help local health departments inoculate medical workers and that he may withhold future vaccine allotments from hospitals that have not used most of their available supply.

The governor, a Republican, said any hospital, contractor, pharmacy or health department that has not used 75% of its supply might not receive additional doses of the vaccine. Hogan identified hospitals that have been slow to administer it, some of which have used less than 20% of their supplies.

The state would send unused doses to places where they could be distributed quickly, he said.

"No doses should be sitting in freezers while others are waiting," Hogan said during a news conference. "Either use the doses you have been allocated or they will be redirected."

He laid out the most detailed timeline yet for when other priority groups could receive vaccinations.

Teachers were moved into the next eligible group, which includes people age 75 and over. Hogan estimated that they could receive vaccinations at the end of January. The next group, expected to get vaccines in early March, includes people over 65 and those deemed essential workers, such as grocery store employees.

Hogan said he will not wait for all medical professionals to be inoculated before moving on to other priority groups.

The governor noted progress in the state's distribution of vaccines, but he said the rollout will take months, with 30% of the state's population of about 1.8 million likely to be inoculated by the end of May.

Virginia Gov. Ralph Northam, a Democrat, plans to discuss vaccine distribution in his state during a Wednesday news conference.

Vaccine distribution continued across the region Tuesday as the seven-day rolling average of new infections in the District of Columbia, Maryland and Virginia stood at 7,421 - the third consecutive record-setting day.

Baltimore Mayor Brandon Scott, a Democrat, said his city will begin this week to vaccinate first responders and health-care workers not affiliated with hospitals.

The city received 2,600 doses of the Moderna vaccine from state officials last week. Health Commissioner Letitia Dzirasa said officials are unsure of how many more doses the city will receive through next week.

"There's still a very limited supply," she said, urging members of the public to be patient.

Maryland data shows that 1.5% of people in the Baltimore region have been vaccinated, compared with 0.7% vaccination rate in the state's Washington suburbs.

Montgomery County Health Officer Travis Gayles said late Monday that the discrepancy might be because more Montgomery health-care workers have been vaccinated in D.C. or other jurisdictions but have not reported it to the state health department. He also acknowledged that at hospitals, which received the first batches of the vaccine from the federal government, not everyone who is eligible has agreed to take the vaccine.

"If we're honest, there are some folks who are still taking a wait-and-see approach," he said.

While hospitals have received doses directly from the federal government, local governments have had to wait for allotments from state authorities. This is "an additional layer of time" in the distribution process, Gayles said. The county, for example, learned Saturday that it would be receiving a new batch of doses Tuesday.

Of the 4,300 doses that Montgomery has received, 86% had been administered by Monday night, Gayles said. The county has planned six more vaccine clinics to administer the new batches, but with more than 50,000 people in the county's top priority group, it will be some time before vaccinations begin for those in the next category, which includes people 75 and older.

Gayles said the county is not aware of vaccines expiring because of a lack of demand. In such a situation, the health department has told pharmacies to inform county officials, who would then identify a cohort of priority group members to receive the vaccine.

The greater Washington region reported 6,595 new infections and 118 virus-related fatalities Tuesday. D.C. had 262 new cases and four deaths; Virginia had 4,377 cases and 59 deaths; and Maryland had 1,956 cases and 55 deaths.