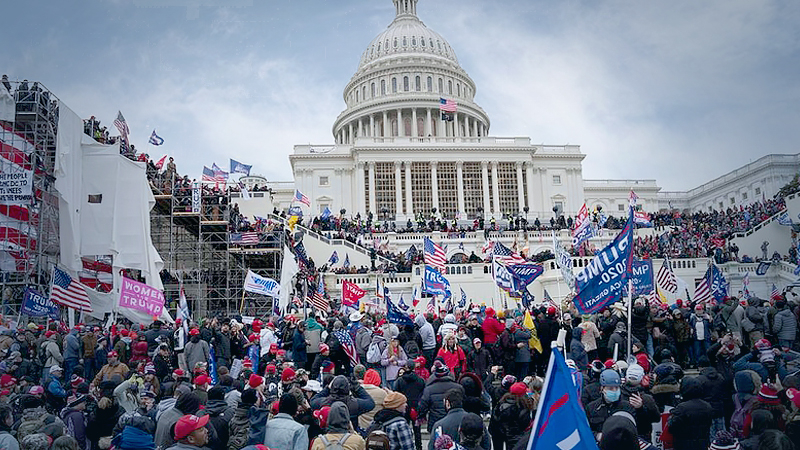 Justice Department, FBI debate not charging some of the Capitol rioters

WASHINGTON - Federal law enforcement officials are privately debating whether they should decline to charge some of the individuals who stormed the U.S. Capitol this month - a politically loaded proposition but one alert to the practical concern that hundreds of such cases could swamp the local courthouse.

The internal discussions are in their early stages, and no decisions have been reached about whether to forgo charging some of those who illegally entered the Capitol on Jan. 6, according to multiple people familiar with the discussions.

Justice Department officials have promised a relentless effort to identify and arrest those who stormed the Capitol that day, but internally there is robust back-and-forth about whether charging them all is the best course of action. That debate comes at a time when officials are keenly sensitive that the credibility of the Justice Department and the FBI are at stake in such decisions, given the apparent security and intelligence failures that preceded the riot, these people said, speaking on the condition of anonymity to discuss legal deliberations.

Federal officials estimate that roughly 800 people surged into the building, though they caution that such numbers are imprecise, and the real figure could be 100 people or more in either direction.

Among those roughly 800 people, FBI agents and prosecutors have so far seen a broad mix of behavior - from people dressed for military battle, moving in formation, to wanton vandalism, to simply going with the crowd into the building.

Due to the wide variety of behavior, some federal officials have argued internally that those people who are known only to have committed unlawful entry - and were not engaged in violent, threatening or destructive behavior - should not be charged, according to people familiar with the discussions.

Other agents and prosecutors have pushed back against that suggestion, arguing that it is important to send a forceful message that the kind of political violence and mayhem on display Jan. 6 needs to be punished to the full extent of the law, so as to discourage similar conduct in the future.

There are a host of other factors complicating the discussions, many of which center not around the politics of the riot, but the real-world work of investigators and prosecutors, these people said.

The Justice Department has already charged more than 135 individuals with committing crimes in or around the Capitol building, and many more are expected to be charged in the coming weeks and months. By mid-January, the FBI had already received more than 200,000 tips from the public about the riot, in addition to news footage and police officer testimony.

"There is absolute resolve from the Department of Justice to hold all who intentionally engaged in criminal acts at the Capitol accountable," Justice Department spokesman Marc Raimondi said in an email. "We have consistently made clear that we will follow the facts and evidence and charge individuals accordingly. We remain confident that the U.S. District Court for Washington, DC can appropriately handle the docket related to any resulting charges."

The primary objective for authorities is to determine which individuals, if any, planned, orchestrated or directed the violence. To that end, the FBI has already found worrying linkages within such extremist groups as the Proud Boys, Oath Keepers, and Three Percenters, and is looking to see if those groups coordinated with each other to storm the building, according to people familiar with the investigation.

Prosecutors have signaled they are looking to bring charges of seditious conspiracy against anyone who planned and carried out violence aimed at the government - a charge that carries a maximum possible prison sentence of 20 years.

But even as Justice Department officials look to bring those types of cases, they privately acknowledge those more determined and dangerous individuals may have operated within a broader sea of people who rushed through the doors but didn't do much else, and prosecutors will ultimately have to decide if all of those lesser offenders should be charged.

Officials insisted they are not under pressure in regards to timing of decisions about how to handle those type of cases. For one thing, investigators are still gathering evidence, and agents could easily turn up additional photos or online postings that show a person they initially believed was harmless had, in fact, encouraged or engaged in other crimes.

Investigators also expect that some of those charged in the riot will eventually cooperate and provide evidence against others, and that could change their understanding of what certain people said or did that day, these people said.

Nevertheless, these people said, some in federal law enforcement are concerned that charging people solely with unlawful entry, when they are not known to have committed any other bad acts, could lead to losses if they go to trial.

Another official noted most of those arrested so far have no criminal records.

Meanwhile, defense lawyers for some of those charged are contemplating something akin to a "Trump defense" - that the president or other authority figures gave them permission or invited them to commit an otherwise illegal act.

"If you think of yourself as a soldier doing the bidding of the commander in chief, you don't try to hide your actions. You assume you will be held up as a hero by the nation," criminal defense lawyers Teri Kanefield and Mark Reichel wrote last week.

Such a defense might not forestall charges but could be effective at trial or sentencing. Trump's looming impeachment trial in the Senate will also focus further attention on his actions and raise questions about the culpability of followers for the misinformation spread by leaders around bogus election-fraud claims rejected by courts and state voting officials.

Prosecutors have other options. For rioters with no previous criminal records or convictions and whose known behavior inside the Capitol was not violent or destructive, the government could enter into deferred plea agreements, a diversion program akin to pretrial probation in which prosecutors agree to drop charges if a defendant commits no offenses over a certain time period.

Such a resolution would not result in even a misdemeanor conviction, and has been used before in some cases involving individuals with a history of mental illness who were arrested for jumping the White House fence. Criminal defense attorneys note there may be further distinctions between individuals who may have witnessed illegal activity or otherwise had reason to know they were entering a restricted area, and those for whom prosecutors can't show such awareness.

There is also a question over whether charging all of the rioters could swamp the federal court system. In 2019, D.C. federal courts recorded only about 430 criminal cases, and fewer than 300 last year, when the legal system slowed significantly due to the pandemic. Many of those cases, however, had multiple defendants.

The workload of prosecuting the rioters could be eased if some of the cases were farmed out to other U.S. attorney offices around the country, but so far D.C. prosecutors have shown no interest in doing so. The law generally requires that individuals be prosecuted in the district in which a crime occurred.

"The crime happened here. Prosecutors and judges can see the crime scene from their office windows. I find it strange anyone would suggest it be done anywhere else," a person familiar with the investigation said, speaking on the condition of anonymity to discuss an internal debate.

Beyond all the evidence-gathering and charging decisions left to do, federal officials concede there will likely be some number of people who were there that day and are simply never identified, due to some combination of luck, masks or lack of social media posts.