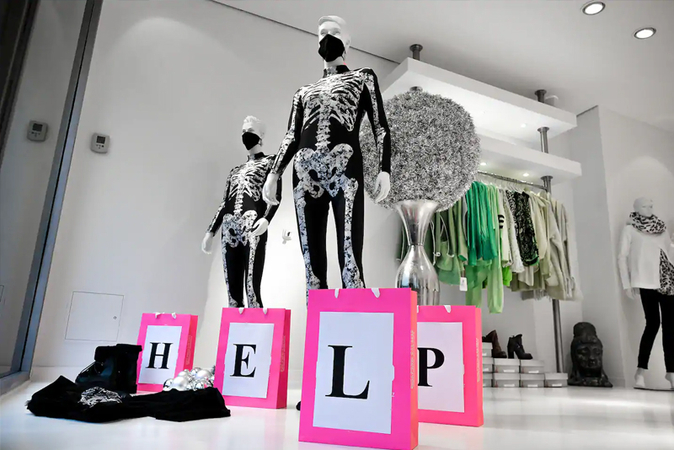 LONDON - At least 225 million full-time jobs disappeared worldwide last year because of the coronavirus pandemic, according to a report published Monday by the International Labor Organization, losses four times worse than those from the global financial crisis in 2009. But the ultrarich have seen their wealth soar.

According to another report released Monday, by the anti-poverty nonprofit group Oxfam, the combined wealth of the world's 10 richest men has risen by more than $500 billion since the crisis began - enough to vaccinate the entire planet and then some, according to the organization.

Both sets of findings identify rising inequity as one of the pandemic's principal outcomes. "Job destruction has disproportionately affected low-paid and low-skilled jobs," which "points to the risk of an uneven recovery, leading to still greater inequality in the coming years," the ILO found. That unevenness is already apparent: Global poverty could take 14 times longer to return to pre-pandemic levels than the recovery of the world's wealthiest, according to Oxfam.

Last year, 8.8% of global working hours were lost, according to the report by the ILO, a U.N. agency. It found "unprecedented disruption" among global labor markets, and that women and young people have felt the worst impact. Globally, women saw 5% employment loss in 2020, as opposed to 3.9% for men.

"In line with the focus of Oxfam's report on inequality, ILO's estimates confirm that the crisis has resulted in relatively larger employment and income losses for women and young people, along with the low-paid and low-skilled," Sher Verick, head of the ILO's employment strategies for inclusive transformation unit, told The Washington Post. "Certain sectors have been hit harder, such as accommodation and food services."

Employment loss among people ages 15 to 24 stood at 8.7%. The data "highlights the all too real risk of a lost generation," according to the report.

Guy Ryder, the director general of the ILO, said during a news briefing that the effect of the pandemic had been greater than not only that of the financial crisis but also that of the Great Depression of the 1930s. Job losses, he said, were likely to continue through 2021 - although he noted that battered economies could begin to rebuild once vaccination efforts start to take effect.

"I am pleased to say that there is some relatively good news in all of this, that we do see tentative signs of recovery," he said. "These signs are fragile, they are uncertain, and the prospects are notably uneven."

The Oxfam findings also suggest a slow path to economic recovery: It could take at least a decade for the world's poorest to recover from the health crisis, while the 1,000 richest people already have made back their losses and the wealthiest 10 have earned more than $500 billion during the pandemic.

Authors of the report said the pandemic could trigger a simultaneous rise in inequality nearly everywhere, for the first time since records began.

"The virus has exposed, fed off and increased existing inequalities of wealth, gender and race," the report said.

"The wealth of ten of the world's richest men has increased by more than £400bn during the pandemic - more than enough to vaccinate every person in the world," he tweeted.

Lawmaker Claudia Webbe, also of the Labour Party, branded Oxfam's findings "obscene" and called for a wealth tax to be placed on the ultrarich - a proposal that some experts say could be the answer to the United Kingdom's financial recovery after the government was forced to spend billions of pounds in borrowed money to save jobs and lives during the coronavirus pandemic.

Britain's Wealth Tax Commission says taxing the rich would be a more equitable solution to helping the country's recovery as opposed to increasing taxes on goods or incomes, political decisions they argue would damage those who need the money to survive.

"It is morally repugnant to allow the poorest people to continue to pay the price for the crisis, when it is clear that a fair tax on the richest could make such a difference," Rebecca Gowland, Oxfam's head of inequality, said last month, the BBC reported.