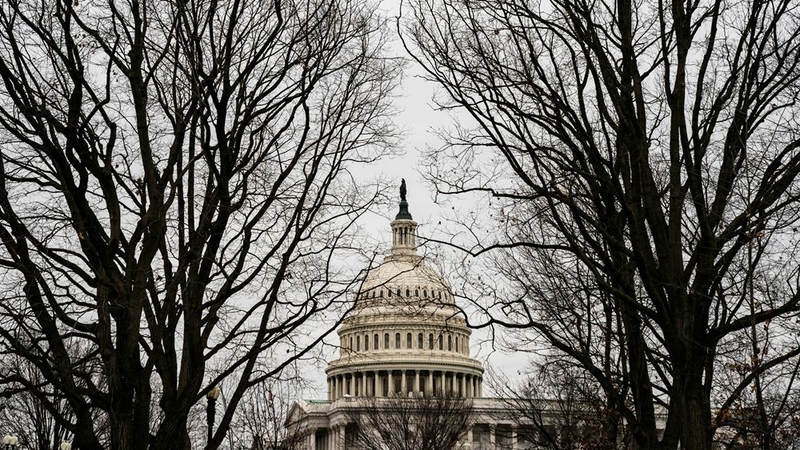 WASHINGTON - The House on Monday formally delivered an article of impeachment charging former president Donald Trump with inciting the deadly insurrection at the Capitol, and Democrats prepared to use his own words as evidence against him in his Senate trial next month.

With solemn looks on their mask-covered faces, the nine House impeachment managers walked over to the Senate shortly after 7 p.m. Monday to deliver the article against Trump, setting in motion his second Senate impeachment trial.

While no final decisions on trial strategy have been made, House managers are concentrating on building their case around Trump personally - what he said in the run-up to the Jan. 6 attack and at a rally that day, and how his words were interpreted in the White House and outside it, according to people familiar with the deliberations.

The impeachment managers and their advisers have been meeting daily, scouring hundreds of hours of evidence - including footage scraped from the conservative Parler and other social media sites - to build an elaborate timeline that is being constantly updated, according to the people, who spoke on the condition of anonymity to describe the internal discussions.

One idea under consideration: to produce a video that highlights how the rioters reacted to Trump's remarks that day and that shows footage of the violent mob inside the building.

At the same time, allies of Trump are growing bullish that as more time passes since the fatal siege, the momentum in favor of convicting the former president and permanently barring him from public office is fading.

"There are only a handful of Republicans and shrinking who will vote against him," said Sen. Lindsey Graham, R-S.C., who has been advising Trump on the upcoming proceedings.

Trump's coming Senate trial, which is not set to begin in earnest until Feb. 9, has ensured that the remnants of the Trump presidency are hanging over the first days of President Joe Biden's tenure, complicating his immediate agenda on Capitol Hill such as confirmation of his Cabinet and passage of a massive pandemic relief package.

Biden and his aides have assiduously avoided getting involved in the political morass of impeachment surrounding his predecessor, though the trial is likely to consume all of the oxygen in Washington once opening arguments begin next month.

Senators will be sworn in as jurors on Tuesday, when Trump will receive the official summons. But the official trial proceedings will be delayed until the week of Feb. 8 under a delayed timeline first proposed by Senate Minority Leader Mitch McConnell, R-Ky., and later approved by Biden.

Several Republican senators, including McConnell, have made it clear that they would consider voting to convict Trump. But it is improbable that at least 17 GOP senators would favor doing so.

Sen. Ron Johnson, R-Wis., said Monday that Democrats, in pursuing impeachment against Trump, were being "sore winners" and that there were not enough Republicans who would vote to convict him.

"Why are we doing this?" he added.

Three Republicans were on the Senate floor Monday evening when the House managers arrived to deliver the article of impeachment: McConnell, Sen. Mitt Romney of Utah and Sen. Roger Marshall of Kansas.

"President Trump gravely endangered the security of the United States and its institutions of government," Rep. Jamie Raskin, D-Md., the lead impeachment manager, said on the Senate floor, reading the article. "He threatened the integrity of the Democratic system, interfered with the peaceful transition of power and imperiled a coequal branch of government."

Senior GOP officials said they expected at least one Senate Republican to move to dismiss the charge against Trump quickly, though such a vote would serve primarily as an early litmus test of how receptive GOP senators would be to arguments that Trump fomented the riot at the Capitol and that he should be permanently barred from public office because of it.

The party remains split over how fiercely to back Trump during the impeachment, with Republican Party committee members debating whether to pass a resolution on the former president's behalf over a long email thread throughout the weekend. A number of them have been pushing for a formal resolution of support of the former president.

The debate over whether to back the president and the resolution ended when Henry Barbour, a GOP committee member from Mississippi, asked that the conversation be taken offline, according to people familiar with the emails.

The next two weeks will give the president's lawyers, led by South Carolina attorney Butch Bowers, and the nine House impeachment managers time to prepare briefs and their legal arguments.

House Democrats have pulled together an extensive outline of the case and the constitutional arguments intended to rebut arguments from some Republicans that a former president cannot be impeached, according to the people familiar with the discussions.

One item of particular interest to impeachment managers is a 10-minute video released Monday by Just Security, an online forum hosted by the Reiss Center on Law and Security at New York University's law school, which shows how Trump's words were heard and interpreted by those who ransacked the Capitol, according to people familiar with the managers' trial preparations.

The House managers say visuals are central in prosecuting the case against Trump because the evidence is in plain sight and will remind senators of what they experienced that day, when the rioters got perilously close to lawmakers and then-Vice President Mike Pence.

Democrats are collecting clips of the siege and probably will work with an outside firm that will weave together the images as evidence to be presented to senators, according to the people with knowledge of the plan.

Any rules regarding whether videos can be submitted during the impeachment trial probably will be handled in an agreement between Senate Democrats and Republicans, setting up the parameters of the proceedings. If not, senators can later vote whether to admit video evidence and witnesses.

The House managers are operating under the expectation that there will be an opportunity for video presentations, the people said.

They are also deliberating the issue of presenting witnesses, including those who were caught up in the Capitol attack and those who may have interacted with Trump during the Jan. 6 riot and the days leading to it. House Democrats have informally discussed with their Senate counterparts their desire to call witnesses during the trial, though - as with the video evidence - nothing has been finalized.

The prospect that footage of Trump could be used as evidence against him is a marked contrast to his first impeachment trial, when Democrats called a parade of witnesses to testify before a House committee - then featured clips of their public testimony in the Senate.

In that trial, the case they sought to make that Trump abused his power and obstructed Congress in pressuring Ukrainian President Volodymyr Zelensky to investigate Biden and his family hinged on testimony about actions that occurred largely behind the scenes.

But this time, much of the evidence is in the public sphere, and Democrats say the senators themselves are effectively witnesses, having lived through the violent siege at the Capitol.

Raskin, an expert in constitutional law and the lead impeachment manager, will also make the Democrats' case to senators that it is constitutional to impeach a president even if he is no longer in office, according to a person briefed on the strategy.

Democrats and some Republicans, such as Romney, have said a former president can be impeached. Other GOP senators who were infuriated by Trump's conduct but nonetheless are not compelled to convict a president who is no longer in office have suggested the move may not be constitutional.

"It makes no sense whatsoever that a president or any official could commit a heinous crime against our country and then defeat Congress's impeachment powers by simply resigning so as to avoid accountability and a vote to disqualify them from future office," said Senate Majority Leader Chuck Schumer, D-N.Y.

John Bolton, the former Trump national security adviser who emerged as a vocal critic of Trump, savagely criticized the idea of a Senate impeachment trial Monday in a piece in the National Review, saying the exercise was ultimately impractical and would benefit Trump, not those who wish to see him banished from the national political stage.

"Like Impeachment 1.0, the 2021 edition is badly conceived, poorly executed, and likely to produce precisely what the first round did: results 180 degrees contrary to the objectives that impeachment supporters say they want," Bolton wrote in the conservative publication.

Now ensconced at his private club in South Florida, the former president is continuing to cobble together his legal and public relations team, which will differ significantly from the formal White House apparatus that surrounded him in his first impeachment trial last year. Trump is expected to stay in Florida during the trial, according to an adviser.

Jason Miller, who has served as a Trump senior adviser in both his presidential bids, is handling much of the communications work for impeachment, and the former president has asked a coterie of House Freedom Caucus members to flood the airwaves to defend him.

Trump's team is planning to circulate additional polling in the coming days, paid for by his PAC, to warn Republican senators of the political consequences of voting to convict him.

Graham said he has reassured Trump that he would not be convicted and that it was a simple case.

"He's thinking about the trial and decompressing," Graham said. "I think he appreciates having some of the extra time he didn't have in the past."

Bowers, a longtime South Carolina GOP lawyer whom Graham connected with Trump, did not respond to requests for comment.

Graham and others said the president was likely to expand his legal team, but many of his longtime attorneys, including Jay Sekulow, Pat Cipollone and Rudy Giuliani, are either uninterested or not involved.

Sekulow, Cipollone and Giuliani did not respond to requests for comment.

In another difference from last year's trial, Chief Justice John Roberts is not expected to preside in next month's proceedings and in his place will be Sen. Patrick Leahy, D-Vt., the president pro tempore and the most senior Democrat in the chamber, according to an official familiar with the matter.

Leahy's role, first reported by CNN, began sparking some pushback from some of Trump's conservative allies who argued that not having the chief justice preside delegitimizes the trial, though he does not appear to be constitutionally required to do so because Trump is not the current president.

"If Chief Justice Roberts can't be bothered to come over for the so-called impeachment, makes you wonder if this exercise is constitutional at all," tweeted Sen. Rand Paul, R-Ky.

A Supreme Court spokeswoman said Roberts had no comment on whether he declined entreaties to preside over Trump's second impeachment trial. Leahy defended his ability to be impartial in his presiding duties, which are largely ceremonial anyway.

"I'm not presenting the evidence. I am making sure that procedures are followed," Leahy told reporters on Monday. "I don't think there's any senator who - over the 40-plus years I've been here - that would say that I am anything but impartial in voting on procedure."