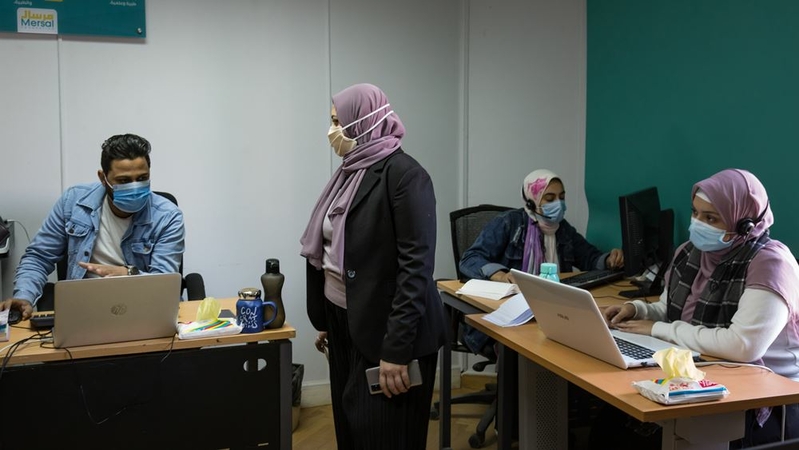 CAIRO - The pleas for help were flooding in. By 2 p.m., Raba Mokhtar was picking up the 131st call of the day to the Mersal Foundation's 24-hour hotline. Like the vast majority, it was related to the coronavirus pandemic.

On the other end of the line, a woman was frantically describing the condition of a relative, a 67-year-old man who had tested positive for the virus. He had a 100-degree fever and could hardly breathe. They had first tried the Health Ministry's hotline to look for a bed in a government hospital, with no luck.

"So, you called them and they placed him on a waiting list?" Mokhtar confirmed, peppering the woman with questions and jotting down answers. "And he needs an intensive care unit?"

In a country where government health resources can be either stretched or inadequate and where most people cannot afford hospitalization, a once little-known charity has become a lifeline for thousands of Egyptians. For the past year, and especially during the latest coronavirus wave, the Mersal Foundation has contracted and paid for beds in private hospitals or provided oxygen tanks to people in need.

Mersal and its founder, Heba Rashed, have become so trusted that more than a quarter-million people now follow her social media accounts to learn the true impact of the pandemic in Egypt. Her posts have become an antidote to a widely criticized lack of transparency in the government's response to the crisis. Today, many Egyptians cling to Rashed's every assessment.

"Founder and CEO of the NGO @Mersalcharity, one of the most trusted voices on Covid19 in Egypt, stating that there is a slight decline in the number of cases," tweeted the Big Pharaoh, a well-known blogger, on Jan. 13. "A similar report of her during wave 1 preceded a decline. Situation is still very serious, but let's hope."

Egypt has reported about 165,000 infections and 9,100 deaths since the start of the outbreak. Medical experts and even government ministers have publicly said the real numbers are far higher.

President Abdel Fatah al-Sissi's government has sought to suppress critics who contradict official accounts of the pandemic. At least 15 people have been arrested for spreading "false news" about the virus, U.N. officials said. Doctors have been jailed or reprimanded for complaining about a lack of protective equipment, and a Western journalist was expelled for publishing data that questioned the official toll.

The lack of public confidence deepened in January when a video went viral online claiming that coronavirus patients at a government hospital had died because of a lack of oxygen. The government denied the report, but a week later Sissi ordered a doubling of oxygen production to meet increased demand.

Against this backdrop, the Mersal Foundation has emerged as a trusted oasis of care.

And every day, Rashed has become a covid-19 prognosticator for her legions of followers. "It makes me feel very responsible for every word I utter," said Rashed, 40. "People get affected by everything I say."

Growing up in Jordan and the Egyptian desert town of Fayoum, Rashed never intended to start a charity. In college, she studied Spanish and Arabic and later earned a master's degree in linguistics and several diplomas in other fields. She later worked as a linguist and as a project manager. In her spare time, she volunteered at a local charity.

Soon, Rashed said, she found she had "no passion" for her job and found her charitable work more fulfilling. She also noticed there were few nonprofit groups in Egypt specializing in health issues. So with two other friends, she launched Mersal five years ago.

"It was truly hard at the start," Rashed recalled. "We had no connections."

Eventually, they found a sympathetic donor. He gave roughly $1,300, and they set up the charity in Rashed's apartment. Slowly they grew, soliciting donations mostly on social media. They began to get noticed by some larger donors.

Today, the foundation has four offices in Cairo and one in the northern city of Alexandria, with roughly 200 employees, according to Rashed. She is often hooked, like an IV, to her phone, fielding scores of calls daily with the energy of a teenager.

On a recent afternoon, Rashed was at the foundation's office on a quiet tree-lined street in Cairo's affluent Maadi enclave, in a large, multilevel house with a green gate. At the reception area, several people were seeking financial help to address various medical ailments.

The nerve center is a small room with eight desks and a rotating shift of employees answering the hotline round-the-clock. The past few weeks, in particular, have been busy, averaging 60 to 70 coronavirus emergencies per day.

"The second wave is much more vicious than the first one, in terms of the intensity of the infection," Rashed said. "The number of infections is bigger than the last wave. The symptoms are much more."

She was infected. So were more than half of her 100 employees in the office, forcing mass isolations.

"It made it very hard to do our work," Rashed said matter-of-factly.

The case of the 67-year-old man who had been struggling to breathe was typical. His oxygen levels were extremely low, though he was using a tank. He was also suffering from diabetes and a heart condition, exacerbating the effects of the coronavirus.

Mokhtar, the employee who took the call, asked the man's relative to send a complete medical report, X-rays of his lungs and any bloodwork. Mokhtar gave her the WhatsApp number.

"We will show them to the medical department, and we will get you a bed when one becomes available," Mokhtar said. "Peace be with you."

Finding a bed usually takes a few hours but can stretch into a day or two, employees said. During the earlier wave in the summer, few private hospitals accepted covid-19 cases, and the government hospitals were less prepared, creating huge shortages of beds.

Now, the foundation has contracted with more than 30 private hospitals. In some cases, patients who need help getting care can pay some or all costs. Mostly, though, the charity pays as much as $1,300 per day for hospital beds in intensive care units, money obtained in large part through online appeals for donations. In many instances, beds in government hospitals eventually become available, allowing the foundation to save its funds for the neediest cases.

"The government has prepared more hospitals to treat the virus, and the private sector has started to deal with it as well," Rashed said.

Nearly 90 percent of patients hail from urban areas, and they often contact to the foundation when the symptoms become unbearable, said Magdy Eissa, the foundation's medical director. The charity also has helped 22 infected refugees, largely from sub-Saharan Africa, since December.

The foundation's Facebook page is filled with grateful notes from patients and their relatives, urging people to donate. There are also searing descriptions of the toll the virus has taken.

Hossam Elagamy wrote about his family's struggle last year to save an aging, diabetic relative infected with the virus who fell ill and started to vomit. The ambulance arrived three hours later, but the paramedics refused to transport the man, because he had not taken a coronavirus test. Finally, an hour later another ambulance came and took him to a hospital.

At the hospital, the staff refused to give him an ICU bed, saying they were not equipped to treat covid-19 cases. An hour later, an ambulance took him to another hospital. It, too, was full.

"We called everyone we know who might help and it was in vain," Elagamy wrote.

He finally went online to search for options for hospitals. He spotted a Facebook post from a woman applauding the Mersal Foundation's efforts. Elagamy called the hotline and was asked to send his relative's medical report.

Fifteen minutes later, the foundation had found a hospital bed, he wrote. But his relative's condition deteriorated at the facility. He later died, Elagamy said.

"May God remove this crisis," Elagamy wrote. "May God end this epidemic."