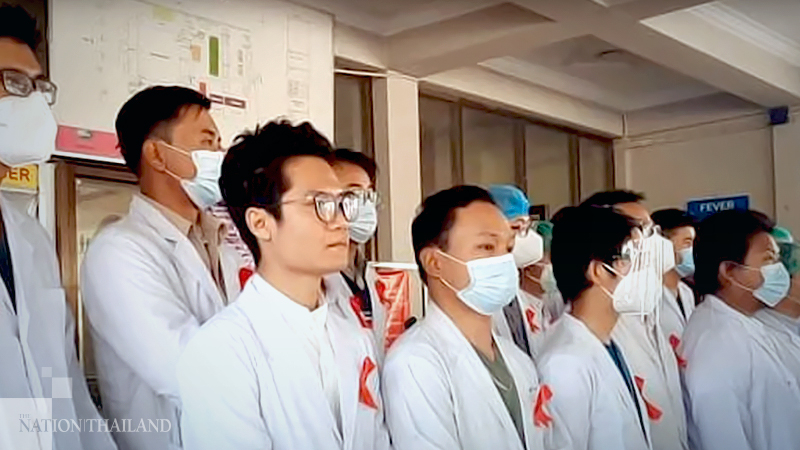 HONG KONG - Lynn Nu, an assistant surgeon at a government hospital in northern Myanmar, did not show up to work on Wednesday. Neither did 36 other assistant surgeons, almost the entire medical staff at the 500-bed facility, leaving one nurse to tend to patients.

The "military says they rule Myanmar, and are in charge of the government now," he said. "But we are refusing to work under them and their dictatorship."

Across Myanmar, a campaign of civil disobedience is swelling in response to this week's military coup, which ousted the civilian government led by Aung San Suu Kyi and her National League for Democracy (NLD). Unlike past resistance movements, notably the 1988 pro-democracy uprising that made Suu Kyi a national icon, Myanmar's new dissenters are keeping their activism off the streets - finding safer, digitally driven ways to reject military rule.

"We want to make our feelings heard, but at the same time to do what we could without being rash and demonstrating on the streets," Lynn Nu, 32, added. "We thought this movement was the safest bet."

The campaigns have targeted institutions directly run by the military and government-run hospitals. Staffers at 70 hospitals and medical departments across 30 towns and cities in Myanmar are refusing to go into work at government-run hospitals, treating patients in private facilities instead. Others quit their jobs at Mytel, a telecommunications company run by the military. And some are calling for a boycott of goods made by military-linked companies, which include Myanmar Beer and Red Ruby cigarettes, ubiquitous in the country's tea shops.

Earlier this week, Myanmar's military, led by commander in chief Min Aung Hlaing, detained Suu Kyi and her ministers and declared they had taken over the government. NLD lawmakers were barricaded inside their guesthouses in the capital, Naypyidaw.

On Wednesday, Suu Kyi was charged with possessing electronic equipment allegedly imported illegally, while ousted civilian president Win Myint was charged with breaching coronavirus rules that ban gatherings - allowing the military to keep the pair detained for another two weeks.

The spark for the coup was the military and its proxy party's refusal to accept the results of November elections that Suu Kyi's party won in a landslide. But tensions between Suu Kyi's civilian government and the generals had been building over five years of a fragile power-sharing agreement.

Since the coup on Monday, some level of normalcy has returned to Myanmar. Communications are functioning. Chief ministers and NLD lawmakers have returned to their homes.

But public anger appears to be growing.

It started with the faint, tinny sound of tapping around 8 p.m. Tuesday, as residents in Yangon, the largest city, began to bang on pots and pans from their balconies to register their disgust with the military's actions.

Whole streets and neighborhoods joined in, following a local tradition to ward off evil spirits with drums, eventually reaching a crescendo as people made noise any way they could. Some whooped and cheered, banging on tables and the roofs of their cars, while taxi drivers sounded their horns.

The campaign is gaining momentum; more honking and banging again erupted on Wednesday night, this time even louder and more sustained than before, with more people out on the streets. Some also sung a revolutionary anthem from 1988 after lyrics circulated earlier in the day.

Doctors, celebrities and NLD politicians are also raising the three-finger salute of defiance popularized by the Hunger Games trilogy, also a symbol of resistance in neighboring Thailand against the monarchy and the army-backed government

Kyaw Thu Win, of the punk band Rebel Riot, said the group is recording a new song called "One Day" in solidarity with the growing resistance. Similarly, their fight for injustice will be kept off the streets for now, in fear of what might come next.

"Right now we are showing solidarity online, from home," he said. "No one is going out yet, so we are showing we do not agree with the new law and new system."

Despite their caution, pushback from the authorities has already begun. A 35-year old resident of South Okkalapa, a neighborhood in east Yangon, said soldiers and community leaders visited their houses Tuesday night, complaining about the pot-and-pan protest.

"They said, 'this is none of your business, do you all want to be captured?' " said the resident, who declined to give her name for safety reasons. Soldiers, she added, warned them that they would patrol the streets and arrest anyone who participated.

The military ruled Myanmar for half a century until a quasi-democratic transition began in 2010. Its brutal reign was defined by its brutality: arbitrary arrests, torture and ill-treatment. There was no free speech or free assembly, and residents who lived through those times describe a police state, where neighbors would snitch on each other and where fear was prevalent.

Even under the NLD-led civilian government, which took power in 2015, the military remained powerful. The army has continued to wage wars against ethnic militias and minorities - most notably, the Rohingya, more of a million of whom were driven from their homes in a scorched-earth campaign in 2017.

The military's record is on the minds of resistance campaigners and organizers, worried that a wrong move could herald a wider crackdown.

"We don't want to give them any excuse to crack down on us more, and say there is instability," said Lynn Nu, the assistant surgeon. "We have fear, because they have guns, and we have no guns. But we will do our best."