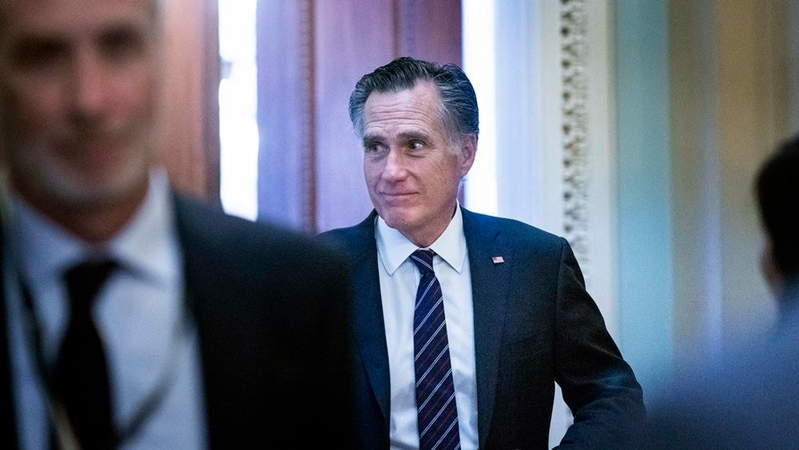 The emergence of Romney's child benefits plan as Democrats prepare a similar effort could give the White House an opportunity to incorporate policies with bipartisan support into its relief package. Romney has said Biden's stimulus proposal is too expensive, meaning he may vote against the broader plan even if it includes much of his new child benefits proposal.

Romney's new plan, like the one being explored by senior Democrats, would provide the benefit monthly by depositing it directly into taxpayer bank accounts. Advocates for expanding child benefits say they will make an enormous dent in child poverty in the United States, though some conservative scholars say the benefits may discourage parents from pursuing employment. The extent of GOP support for Romney's proposal is unclear.

Unlike Democrats' plan, Romney's Family Security Act would be paid for, in part, by eliminating Temporary Assistance for Needy Families, a welfare program, as well as other existing federal tax credits for children and working families. Many Democrats are likely to oppose this part of Romney's plan.

Romney is expected to offer the bill as an amendment to Democrats' budget resolution on Thursday night, according to two people who spoke on the condition of anonymity to discuss internal planning. The budget resolution is the vehicle for passing Biden's stimulus package.

"We have not comprehensively reformed our family support system in nearly three decades, and our changing economy has left millions of families behind," said Romney, the GOP's 2012 presidential nominee, in a statement. "Now is the time to renew our commitment to families to help them meet the challenges they face as they take on the most important work any of us will ever do - raising our society's children."

White House Chief of Staff Ron Klain reacted to the proposal on Thursday, tweeting: "Really looking forward to see what @SenatorRomney will propose here -- an encouraging sign that bipartisan action to reduce child poverty IS possible." Biden officials and Romney staffers discussed the plan after its release on Thursday, according to one person who spoke on the condition of anonymity to discuss the private conversations.

The United States has among the highest rates of child poverty in the developed world, a trend exacerbated by the coronavirus pandemic. The nation provides less financial support to families with children than all but a few developed countries. That has led Democratic lawmakers such as Sens. Michael Bennet of Colorado and Sherrod Brown of Ohio to lead legislation to expand child benefits that command near-universal support among the Democratic caucus.

Their push is now gaining bipartisan momentum in part because of social conservatives such as Romney and Sen. Mike Lee, R-Utah, who have also expressed alarm about high levels of child poverty.

Romney's plan would have a significant effect on lowering child poverty, according to an analysis by the Niskanen Center, a center-right think tank. The percentage of children in poverty would fall by about 32%, with close to 3 million lifted out of poverty. The share of children in "deep poverty" would fall by about 50%, meaning about 1.2 million children would be lifted out of deep poverty, the analysis found.

"Romney's proposal shows that there's substantial bipartisan agreement around expanding child benefits," said Ernie Tedeschi, an economist who served in the Treasury Department during the Obama administration. "A permanent expansion along the lines of what Senator Romney or President Biden have proposed would be among the most pro-family, anti-poverty policies in a generation."

Some liberal Democrats said Romney's plan could be improved by maintaining the tax credits and welfare program it proposes repurposing to fund the new child benefit. "It's misguided to undercut the policy's poverty-reducing impact by using deep cuts in other critical forms of support for low-income people to pay for it," said Sharon Parrott, president of the Center on Budget and Policy Priorities, a Democratic-aligned think tank. "There are far better financing options that ask those who are doing the best to pitch in a little more."

Romney's plan would also not provide the benefit to those living in the United States without a Social Security number. In the 2017 tax law, the GOP stripped as many as 4 million immigrant filers from receiving the existing child tax credit - which Romney envisions repurposing for his new proposal.

Matt Bruenig, founder of the People's Policy Project, a left-leaning think tank, said the benefits Romney's new plan provide to poor families outweigh the potential downsides of eliminating these programs, which Bruenig said are complicated and hard for families to navigate.

On the right, Angela Rachidi, a conservative scholar at the right-leaning American Enterprise Institute, wrote last month that extending child benefits to the poorest families would "decrease employment for low-income parents."

"When you add in other benefits nonworking people get - such as food stamps and housing assistance - [to the proposed child tax credit], you start getting $25,000 in benefits, which is where you start to get concerned about employment disincentives," Rachidi said in an interview.

Sam Hammond, a poverty expert at the Niskanen Center, said work disincentives come from sharp declines in the values of benefits as worker income increase, something he said the Romney plan avoids.

Romney's push reflects a slowly building change among policymakers away from several decades in which tax cuts often represented the principal antipoverty strategy of both parties, said Joshua McCabe, a historian of U.S. welfare policy at Endicott College.

With few taxes left to cut after enormous tax reductions in preceding decades, policymakers have in recent years begun to look at providing direct cash payments to the poor. That trend was dramatically accelerated by the federal government's response to the coronavirus pandemic over the past year, as tens of millions of people were sent direct payments by the IRS, in a policy backed by politicians of both parties.

"Since we've exhausted the tax cut strategy, lawmakers have begun to creep into direct payments. But covid relief blew the lid off of that idea - it naturalized and legitimized it," McCabe said. "This is why we now have Republicans saying this is the best way to fight poverty."

Romney's plan differs from Biden's in several key ways. Romney is proposing to pay for the measure by consolidating existing government programs and ending a policy that lets Americans deduct up to $10,000 in state and local taxes off their federal tax obligations, a move Democrats are expected to oppose, especially those representing areas with higher taxes.

If enacted, Romney's plan would be deficit-neutral and finance the new child benefit through 2025, the Niskanen Center's analysis found.

Biden has proposed a one-year expansion of the child benefit that would add about $120 billion to the deficit. Senior Democrats and Biden officials have said they aim to make the benefit permanent after it is potentially approved for one year in the current stimulus package.

Under Romney's plan, the size of the benefit would also begin to diminish at above $200,000 in annual income for single tax filers, as well as $400,000 for joint filers. Democrats have not detailed income thresholds on the child tax credit expansion they are expected to unveil in days.

Romney's plan would also call for the new benefit to be administered through the Social Security Administration, rather than the IRS, which some experts believe would make it easier for the federal government to reach poor families with unreliable tax return information. It would also cap the potential monthly benefit one family can receive at $1,250.