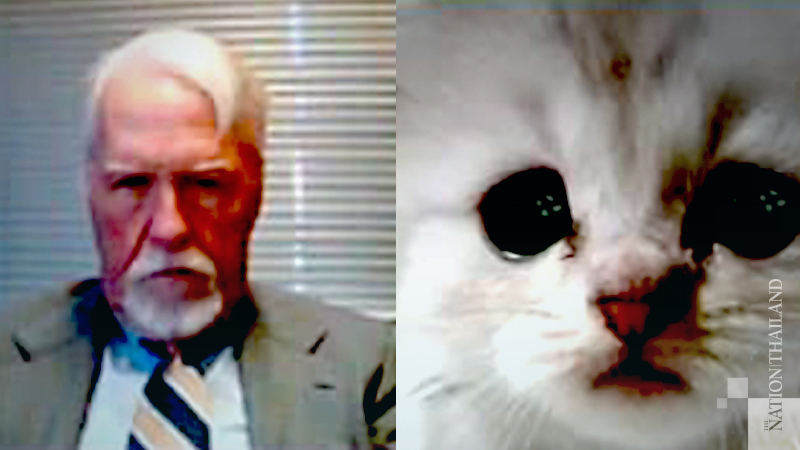 As far as courtroom disclosures, this one was unique: "I'm not a cat," a Texas attorney claimed as his Zoom square displayed a fluffy, white feline.

At a routine civil forfeiture case hearing in Texas' 394th Judicial District Court, Rod Ponton, Presidio County attorney, accidentally signed on with the cat filter, making the flummoxed attorney look like an adorable kitten. The 34-second clip of Ponton's brief appearance as a cat immediately amusing many and becoming a viral hit among the likes of Vermont Sen. Bernie Sander's mittens and runaway llamas at a time when court events are frequently held virtually.

The prevalence of video chat platforms for court appearances has led to other unusual moments: A defendant in Sacramento appeared from a barber's chair, a Florida burglary suspect tried to shoot his shot with a judge and a lawyer in Peru was caught on camera naked after he stripped to have sex. But Tuesday's video was the cat's pajamas to many.

Even Ponton, once he recovered from cat face and mortification, found humor in his proverbial 15 minutes of fame.

"At first I was worried about it," Ponton, 69, told The Washington Post on Tuesday, "but then I realized as it was going viral if the country could take a moment to laugh at my cat moment at my expense, I'll take it. We've had a stressful year."

Judge Roy Ferguson, who was presiding over the hearing, was the first to mention the cat filter.

For the first few seconds, it seemed a cat had Ponton's tongue as he silently tried to revert the effect, giving an illusion that the virtual kitten's delightfully wide eyes were darting back and forth.

"Mr. Ponton I believe you have a filter turned on in the video settings," Ferguson said.

Ponton interrupted the judge with an exacerbated guttural noise.

The video's sound was fine.

"I can hear you," Ferguson told the cat lawyer. "I think it's a filter."

"It is," Ponton said, the kitten's head bobbing up and down to signal Ponton was nodding.

"I don't know how to remove it. I got my assistant here trying to..." Ponton added, trailing off.

"I'm prepared to go forward with it," Ponton said, not wanting to pussyfoot around. "I'm here live."

"I'm not a cat," Ponton promised as the cat mouthed what he was saying.

"I can see that," Ferguson said after a pause.

Eventually, Ponton figured out how to remove the filter and the rest of the hearing proceeded as normal. He said he was using his legal assistant's computer in his office and believes her daughter may have swapped in the filter before he logged on.

Seeing the moment as an educational opportunity, Ferguson posted the video and it was shared by Texas attorney Kendyl Hanks and Reuters U.S. Supreme Court reporter Lawrence Hurley. By Tuesday evening, one version on Twitter had been viewed more than 18 million times.

"It's something that's given the world a smile - and it's an innocent smile at no one's expense," Ferguson told The Post.

Reaction to the video was immediate: People jokingly compared the cat lawyer's hearing to the ongoing Impeachment hearing, photoshopping a cat head over the face of Trump lawyer Bruce Castor Jr. Many joked the viral moment could end badly, alluding to Milkshake Duck, a meme that describes people who initially are perceived as good but later revealed to be flawed.

Ponton, a well-regarded lawyer, is a former city attorney for Alpine, the small Texas city where he currently practices law, the Dallas Morning News reported. In 2019, Ponton appeared in a Netflix documentary series, The Confession Killer, about one of his former clients, convicted serial killer Henry Lee Lucas, according to the newspaper.

Now, Ponton has joined the ranks of others who gained fame during the pandemic for Zoom antics, including a boss who accidentally showed up to a Monday virtual meeting as a potato.

Since the start of the pandemic, Texas courts have held more than 1 million virtual hearings, leaving Ferguson often in charge of guiding others through technical difficulties, he said.

"That's part of my job now in the pandemic - to fix everything that can go wrong," he said.

The 394th Judicial District has no IT department, Ferguson said, and covers a roughly 25,000-mile rural area of western Texas nestled between Mexico and New Mexico. Ferguson, who has presided over cases via Zoom since last March, said he's seen "everything possible that could go wrong" with a virtual hearing.

His best tip for those appearing virtually before a judge: You're still in the courtroom - and audible to the judge - after he adjourns the virtual hearing. "There are some very colorful things from lawyers being heard," Ferguson said. "Watch what you say, because YouTube hears all and never forgets."

Ferguson also said that while he was genuinely happy to see people enjoy a laugh - one he hopes is with the lawyers and not at them - he views the video as a testament to the professionalism of Texas lawyers, as the other attorney present was notably straight-faced in the video.

"Every one of those people in that room kept their composure," Ferguson said. "The lawyer who was, I guess you would say the butt of the joke, has handled it with absolute grace."

Ponton, who says he prefers dogs to cats if you ask (and we did), has another tip to take from the tale: "It happened to me today, it can happen to you tomorrow."