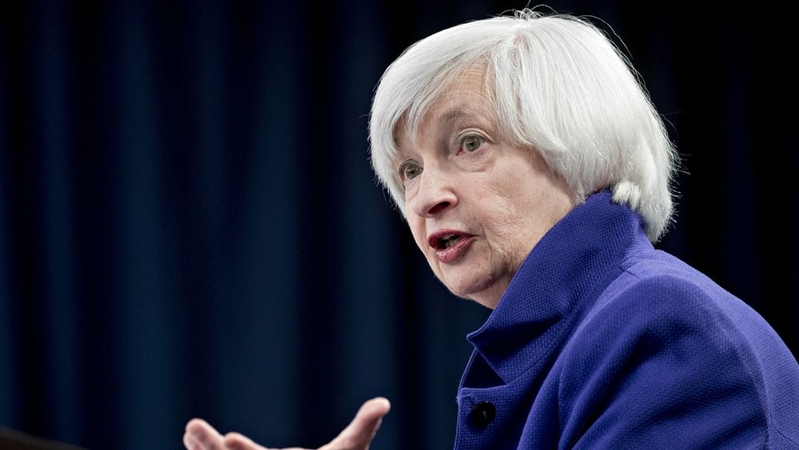 U.S. Treasury Secretary Janet Yellen called for greater transparency around the use of International Monetary Fund resources and on existing stocks of debt as global finance chiefs consider an expansion in the IMF's lending firepower.

"Transparent and comprehensive debt data will help promote sustainable growth," Yellen said in a letter to her Group of 20 counterparts Thursday ahead of a virtual meeting Friday of finance ministers and central bankers. She said that while an expansion in the IMF's resources could help low-income nations in the fight against the coronavirus, the G-20 and others need to work toward "greater transparency and accountability" in the use of the fund's firepower.

The IMF is eyeing a $500 billion boost to its reserve assets, called special drawing rights or SDRs, which the U.S. and others including France and Italy are likely to support, Bloomberg News has reported.

A key concern among private debtholders, along with Republican critics in the U.S. Congress, has been the scale of China's loans to developing nations. The worry is that fresh loans to some countries could end up flowing to pay off obligations to China; such concerns contributed to holding up a bondholder deal with Zambia last November.

Yellen's letter is "very helpful" and raises an important issue for the G-20," IMF Communications Director Gerry Rice said at a briefing Thursday.

SDR allocations served the world "very well at the time of the global financial crisis, and our view is that it could serve the world well again in this crisis," he said.

Yellen also made an appeal for multilateral cooperation among the G-20, in a sharp reversal from Trump-era unilateralism that triggered rifts between the U.S. and many allies.

"No one nation alone can declare victory" over the historic health and economic crises stemming from the deadly coronavirus, Yellen wrote in her letter. "Our cooperation has never mattered more. This is a moment made for action and for multilateralism."

She endorsed strengthening support for developing nations, saying that "without further international action to support low-income countries, we risk a dangerous and permanent divergence in the global economy." The IMF and World Bank "must continue to play a role in financing the global health response," she said.

Boosting the IMF's firepower proved a political battle in Washington in the past, and some have declared their opposition this time around as well. Yellen's predecessor, Steven Mnuchin, opposed the move, saying that because reserves are allocated to all 190 members of the IMF in proportion to their quota, some 70% would go to the G-20, with just 3% for the poorest developing nations.

In her letter, Yellen continued to urge allies to take "significant" fiscal policy actions, echoing her calls that the U.S. Congress "go big" with domestic relief and recovery efforts.

She also called on the G-20 to help distribute Covid-19 vaccines more broadly through efforts such as the Covax initiative, saying that "a rapid and truly global vaccination program is the strongest stimulus we can provide to the global economy."

With Italy the host for this year's G-20, this week's talks will debut the new Mario Draghi administration.