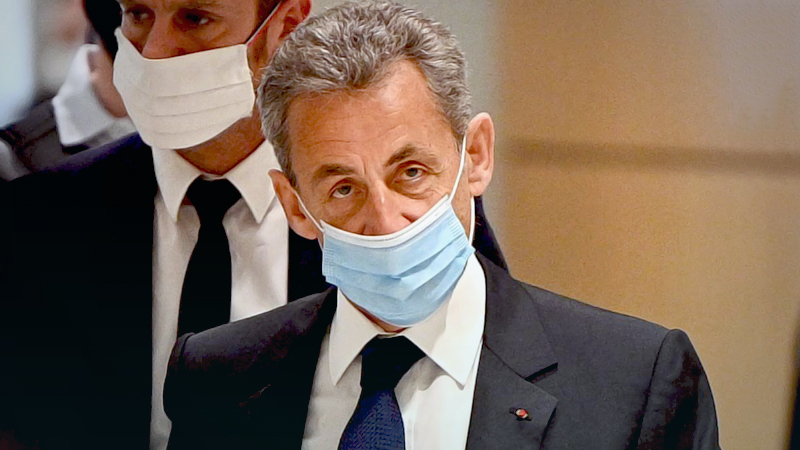 Former French president Nicolas Sarkozy was found guilty of corruption and influence peddling on Monday and sentenced to one year in prison, marking a historic defeat for the 66-year-old, who has remained popular among conservative voters even as his legal woes mount.

The verdict included a two-year suspended sentence, but Sarkozy's attorney said her client would appeal, delaying the sentence from taking effect. Given that short prison sentences in France can typically be waived, it is unclear whether Sarkozy would have to spend any time in prison even if the appeal were to fail. He could also request to serve the sentence at home, subject to electronic monitoring.

The ruling followed years of parallel investigations against the former president, and some others are ongoing. Sarkozy, who was president from 2007 to 2012, will face another trial later this month over accusations that his party falsified accounts during his unsuccessful reelection bid in 2012.

The charges over which Sarkozy was sentenced Monday were centered on whether he was behind a deal with a magistrate to illegally receive information on an inquiry linked to him, using false names and unofficial phone lines.

According to the prosecution, Sarkozy and his then-attorney and longtime friend Thierry Herzog attempted to bribe the magistrate, Gilbert Azibert, by offering him a high-profile position in return for information. The incident occurred after Sarkozy had left office.

The inquiry related to claims that Sarkozy and others had accepted illegal contributions from business executive Liliane Bettencourt, the late heiress of French cosmetics giant L'Oréal, ahead of the 2007 presidential campaign. Sarkozy was later cleared of those illegal-funding charges.

Sarkozy's attorneys also denied the accusations of corruption and influence peddling last year, arguing that as the magistrate did not receive the allegedly promised position, it proved the former president's innocence.

Sarkozy said he "never committed the slightest act of corruption."

The prosecution argued, however, that there were no doubts that the magistrate had conveyed details illegally. Their evidence was largely based on wiretapped conversations.

Azibert and Herzog also were found guilty on Monday and were given sentences similar to Sarkozy's. Both have appealed, France's public broadcaster reported.

Prosecutors had originally demanded a four-year sentence for Sarkozy, with a requirement that he serve at least two years. In justifying their request, they cited what they characterized as the damage Sarkozy inflicted on the French presidency.

In its ruling, the court agreed that Sarkozy had "used his status as former French president," rendering his offenses more egregious.

Sarkozy attempted to run in the 2017 presidential election, but he did not succeed, partially because of his mounting legal woes.

He subsequently suggested that his career in politics had come to an end. But Sarkozy has maintained high approval ratings among French conservatives, prompting hope among some of his supporters that he might run in the presidential election next year. In a sign of Sarkozy's continued influence in conservative French politics, he received some prominent backing on Monday.

"The severity of the sentence is absolutely disproportionate and reveals judicial harassment," wrote Christian Jacob, president of the center-right Republican Party, which Sarkozy used to lead. Supporters also questioned why Sarkozy was subjected to wiretapping after he left office.

Investigators deemed those surveillance measures necessary amid mounting questions at the time over how Sarkozy funded his 2007 campaign. Sarkozy continues to face accusations that he received illegal payments from the regime of then-Libyan dictator Moammar Gadhafi ahead of the 2007 election.

Sarkozy is the second former French president in a decade to be sentenced. Jacques Chirac, Sarkozy's predecessor and initial patron, was given a two-year suspended sentence in 2011 for handing nonexistent jobs to political allies during his time as Paris mayor.