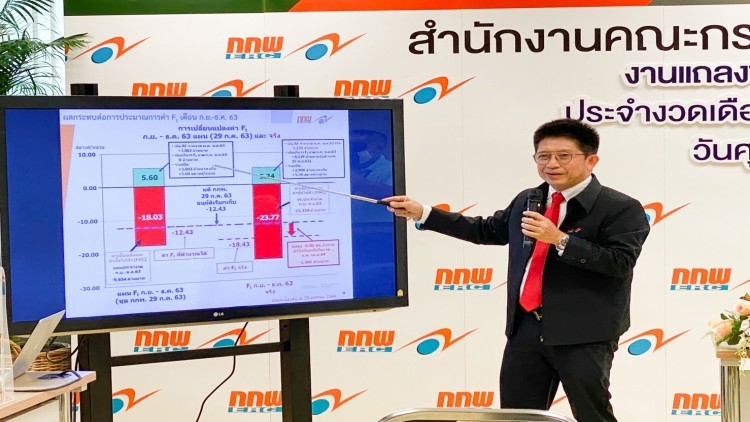 People will be spending less on power until August: ERC

The Energy Regulatory Commission (ERC) on Friday set aside Bt2.61 billion to maintain fuel tariff (Ft) from May to August at -15.32 satang per unit in a bid to help ease people’s financial burden.

“With Ft being maintained at this rate, users will continue paying Bt3.61 per unit for electricity for another four months,” said Komkrit Tantravanich, ERC secretary-general. “Maintaining the Ft will cost about Bt2.61 billion, and the ERC still has Bt4.12 billion available.”

The commission believes the Ft may be affected by the rising price of crude oil towards the end of the year. Crude oil has jumped from US$54.8 per barrel in February to $60 per barrel in March, and the weakening of the Thai currency from Bt30 to the US dollar in February to Bt31 to the greenback in March.

“We also believe that in the second half of the year, demand for energy globally will rise as the Covid-19 situation has started improving in many countries. Hence, we have been using a yearly average to set a suitable Ft rate for the entire year to ensure the cost of electricity remains stable,” he said.

Komkrit added that ERC has set crude oil base at $60 per barrel and exchange rate at Bt31 per dollar to calculate this year’s Ft rate, which has resulted in Ft for May through August coming in at -18.02 satang per unit and Ft for September through December at -7.95 satang per unit. Based on this, the average Ft for the entire year stands at -13.14 satang per unit.

ERC estimates that electricity usage from May to August will be at 67.88 billion units, up by 11.86 per cent from the 60.68 units estimated to be used in the January to April period.

ERC will accept public opinions on the Ft rate for May to August via its website until March 19, before it officially announces the rate later in the month.