TOKYO - Beside the ruins of the Fukushima Daiichi nuclear plant, more than 1,000 huge metal tanks loom in silent testament to one of the worst nuclear disasters in history, the meltdown of three nuclear reactors 10 years ago this month.

The tanks contain nearly 1.25 million tons of cooling-system water from the 2011 disaster and groundwater seepage over the years - equivalent to around 500 Olympic-size swimming pools - most of it still dangerously radioactive.

Running out of space to build more tanks, the government wants to gradually release the water into the sea - after it has been decontaminated and diluted - over the next three decades or more.

Even though a formal decision has yet to be announced, the government and the Tokyo Electric Power Co. (TEPCO) have insisted that an ocean release is their preferred solution and that it is perfectly safe.

The only thing holding them back appears to be the Olympics and the bad publicity it could generate before the Games begin in July, experts say.

The idea of releasing the water has infuriated Fukushima's fishing community, only now getting back on its feet after taking a battering in the wake of the 2011 disaster and the subsequent ocean contamination. Also angry is South Korea, even though it is more than 600 miles away on the other side of Japan.

"Recovery is the most important thing for us, and releasing the water will pull back the recovery process" said Takayuki Yanai, head of the trawler fisheries cooperative association in the port of Onahama. The local fisheries industry is still only half as big as it was before the 2011 earthquake and tsunami, he said. "I really want them to stop. There must be other options." 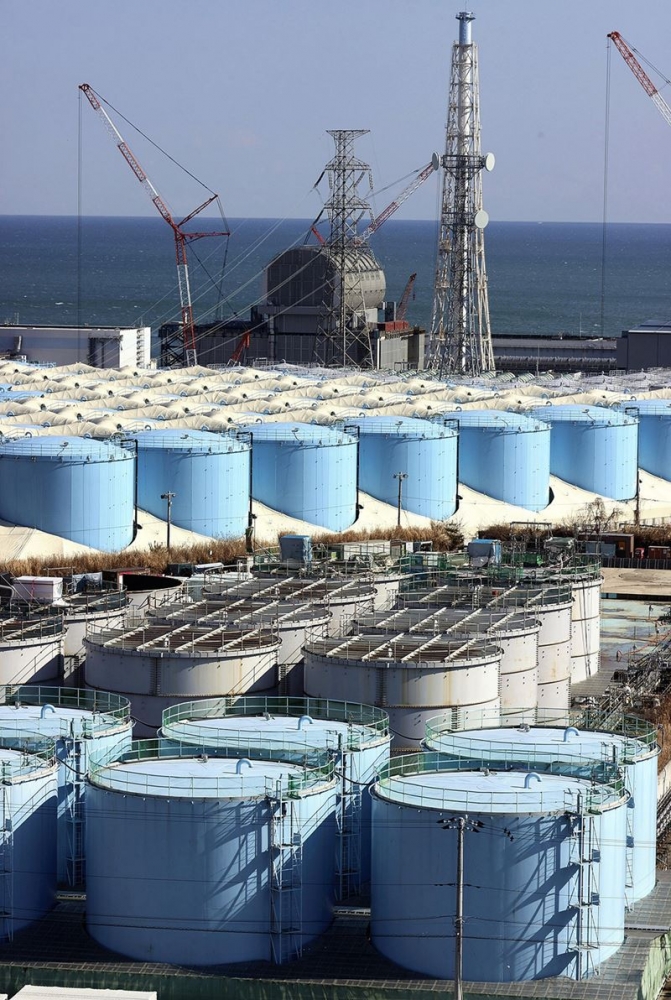 When it comes to the science, the Japanese government and TEPCO say it's on their side.

The water has already been or will be cleaned with an advanced treatment system, known as ALPS, that is capable of removing almost all radionuclides present in the water, including the really dangerous ones such as strontium and cesium.

What would be left is tritium, a naturally occurring isotope of hydrogen that is considered less dangerous to human health and is routinely released into the ocean by nuclear power plants around the globe. Along with tritium would be tiny traces of carbon-14, a radioactive isotope of carbon.

If all the treated water was released into the sea over the course of just one year - as opposed to three decades - the radiation impact for local people would be no more than one-thousandth of the exposure impact of natural radiation in Japan, said Yumiko Hata of the Ministry of Economy, Trade and Industry (METI).

The International Atomic Energy Agency said the release of the water is "technically feasible" and has offered to provide independent radiation monitoring to reassure the public that it would comply with international standards.

But when it comes to public trust, the Japanese government and TEPCO are on shakier ground.

Right from the first weeks of the disaster, when they were extremely slow to admit that three of the reactor cores had undergone meltdowns, there has been a tendency to downplay bad news.

For years, TEPCO claimed that the treated water stored at the plant contained only tritium, but data deep on its website showed that the treatment process had failed to remove many dangerous radionuclides.

Finally, in 2018, it was forced to acknowledge that 70% of the water is still contaminated with dangerous radioactive elements - including strontium-90, a bone-seeking radionuclide that can cause cancer - and will have to be treated again before release.

TEPCO explains the contamination by saying it rushed the treatment process after the accident because it needed to quickly reduce radiation in the water to manageable levels. Further tests show that ALPS, when carefully and repeatedly implemented, can reduce the concentration of radionuclides to well within international standards, it said.

Ryounosuke Takanori, manager of TEPCO's global communications, admitted that some of the data on its website had not been presented "in a form that is easily understood" but said that the company was working hard to "proactively engage in communication initiatives to accurately and quickly convey information."

Ken Buesseler,a senior marine radiochemist at the Woods Hole Oceanographic Institution in Massachusetts, said he would prefer to see all the water treated properly before any is released.

"After you've cleaned it up, then make a decision on what to do," he said. "They spent eight years without telling us about it, and now they are saying: 'Trust us, we're going to take care of it.' "

In Onahama port, about 40 miles south of the wrecked nuclear power plant in northeast Japan, samples of fish from every ocean catch are analyzed for radiation. Tests routinely come back clear, although last month a solitary black rockfish was found to have cesium levels five times the national standard, the first fish to fail the test in 16 months.

Yanai of the fisheries cooperative says he does worry about releasing more tritium into the sea, but his main concern is "irrational fear from consumers" causing "reputational damage" to his produce.

Shaun Burnie, senior nuclear specialist at Greenpeace Germany, said that there are risks involved in releasing tritium and carbon-14 into the sea and would like to see the release delayed at least until 2035, giving more of the tritium time to decay into hydrogen.

But he ties the decision to the government's much bigger pledge - to remove all the extremely radioactive corium from the wrecked reactors by 2041 or 2051, even though the technology to do so doesn't yet exist, along with millions of tons of contaminated topsoil removed from local fields.

In a new report, Greenpeace calls that pledge a "delusion."

"That's just not going to happen, but it's a sort of mantra," Burnie said. "The water is a symbol. If they can get rid of it, they are meeting that commitment to remove the problem, and that's why they'll discharge it into the Pacific."

Jurin in trade talks with New Zealand ahead of APEC summit