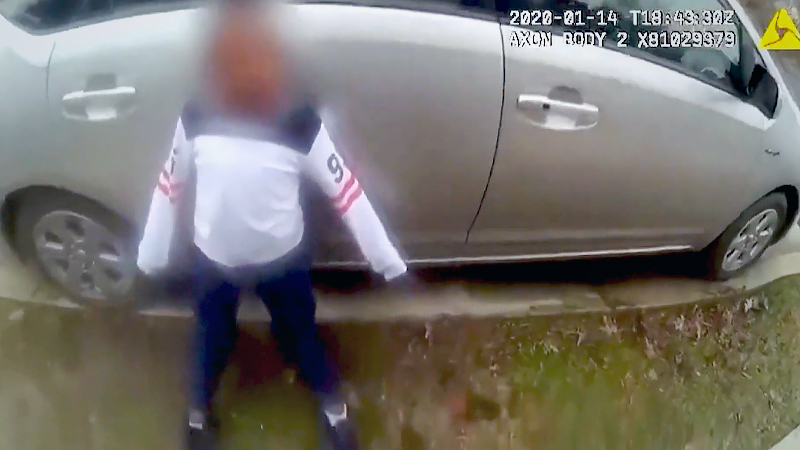 Two Montgomery County police officers loudly berated a 5-year-old boy who had walked away from his school, calling him a "little beast" and telling him that "I hope your momma let me beat you," according to a body-worn camera recording of the incident released Friday by the police department.

At one point, after the child was driven back to his school and walked into an office, one of the officers put her face inches from his, screaming "Ahhh!" five times as he was crying.

"Oh, my God, I'd beat him so bad," she said, loud enough for the child to hear, before speaking him to him directly: "You do not embarrass me like this at school."

The video of the January 2020 interaction aligns with many of the allegations in a lawsuit filed this year by the child's mother. That matter is pending.

The recording also shows a school administrator openly telling the two officers the student's past behavioral problems and commenting on his mother's parenting methods while the child continues to cry feet away.

Community and political leaders reacted with horror as the video spread online.

"It made me sick," said Montgomery County Council member Will Jawando, D-At Large, who pushed for the video's release. "We all saw a little boy be mocked, degraded, put in the seat of a police car, screamed at from the top of an adult police officer's lungs, inches from his face. This is violence."

The Montgomery County school system released a statement describing the video as "extremely difficult" to watch.

"There is no excuse for adults to ever speak to or threaten a child in this way," the school system said. "As parents and grandparents, we know that when families send their children to school, they expect that the staff will care for them, keep them safe and use appropriate intervention processes when needed."

A police spokeswoman said the two officers in the video - identified in the litigation as Dionne Holliday and Kevin Christmon - were the subject of an internal department investigation that has concluded. They remain employed as sworn officers for the department, the spokeswoman said.

"A thorough investigation was conducted of the entire event," the department said in a statement, saying it could not comment in its findings because such investigations are considered confidential under Maryland law.

Both the Montgomery County Police Department and school system, citing the pending litigation, declined to address the incident in detail.

A woman who answered a phone number listed for Holliday told a reporter not to call her again and hung up. Efforts to reach Christmon have been unsuccessful.

In a statement, the union representing Montgomery County police officers said its members do not receive training on how to "effectively communicate with a young child in distress" unless they are part of a specialized unit.

"It is clear, that the event and everything that has come after the event should have been handled better by all involved," the statement from Fraternal Order of Police Lodge 35 said.

The statement also said the union members in the incident cooperated with a nearly year-long investigation, giving testimony on the incident in August before waiting "another six months for the police chief to take corrective action."

Nearly 500 people have signed a letter online calling for the officers to be suspended or fired. The letter also demands the school system to review procedures for when police interact with children in schools.

"This footage makes it clear that officers terrorized this five-year-old child in the place any child should feel safe and protected - at school," said Tiffany Kelly, a Montgomery County Public Schools parent and community activist, in a statement released by the Silver Spring Justice Coalition.

The officers were accused in the litigation of assault, intentional infliction of emotional distress on the child and other counts, according to court papers. The school system was accused of negligence.

"Employees of East Silver Spring Elementary School had a duty to exercise reasonable care to protect [the child] from harm and to properly supervise [him]," the litigation reads.

The incident unfolded around 1:30 p.m. on Jan. 14, 2020, when the student walked out of East Silver Spring Elementary School and police were called. They caught up to him along Silver Spring Avenue one block away. Christmon approached him and within a minute appeared to begin losing his patience, according to the video.

"Look at me," he can be heard saying shortly before grabbing the student's arm and walking him toward an assistant principal who had arrived from the school, according to the lawsuit.

"Christmon's tone and demeanor directed at [the child] was more befitting a criminal rather than a scared five-year-old," wrote the two attorneys who filed the lawsuit, Matthew Bennett and James Papirmeister.

The boy started to cry, according to the video, prompting the officer to respond: "Cut it out! Hey! Cut it out."

At that point, his cries became interspersed with coughing. Christmon buckled him into the back seat of his squad car.

"I don't want to go," the boy can be heard saying between coughs.

"I don't care," the officer responded. "You don't make that decision for yourself!"

The boy was terrified, the attorneys said, because "he thought he was going to be taken to jail."

Two minutes later, they pulled up to the school. Both officers, the school administrator and the child walked toward the front door.

"That's why people need to beat their kids," the second officer, Holliday, said.

After getting inside an principal's office, according to the lawsuit, Christmon forced the child onto a chair. His crying grew louder.

"Shut that noise up now!" Holliday said, moving close to his face. "I hope your momma let me beat you."

The officers began discussing the student's behavior in front of him.

The boy's mother was called and placed on speaker phone.

"Calm down," she could be heard saying. "Mommy coming, OK?"

Two minutes later, as another school administrator discussed the boy's behavior from that day, Christmon told the boy: "That's because you don't get no whooping."

The two officers continued discussing how he should be parented and kept in line.

"He don't deserve no nap," Christmon added. "Nothing but a spanking."

The two could be heard laughing as Holliday compared him to a "little beast."

Christman bought up the name of a horror movie character. "Do you remember Chucky?"

With the boy still just feet away, Holliday asked an administrator if he could be booted from the school.

"What are the guidelines for getting him ejected from the facility?" she asked.

Bennett and Papirmeister said Friday that the child is receiving treatment for trauma.

"He has nightmares," Bennett said. "He's scared of the police now. It's very upsetting for him."

Papirmeister said the boy's behavior - walking away from a school - cried out for an adult approaching calmly, maybe taking a seat next to him to ask about his day.

"You don't have to be a social worker or licensed counselor to know how to approach a child like this," Papirmeister said.

After his mother arrived, the adults spoke for a little bit in front of the boy.

Both officers repeatedly advised the mother to "beat" or "spank" the child at home.

"We want you to beat him," Holliday said, adding, "Don't use a weapon . . . but you can smack that butt repeatedly."

The officers, the mom and at least one of the administrators finally moved to a conference room away from the child.

After speaking for a while, the child was let back in.

"I don't like bad children, disrespectful children," Holliday said. "I think they need to be beaten, and that's what I told your momma."

Christmon then pulled out his handcuffs, closing one of loops around one of the child's tiny right wrist.

He then pulled both his hands behind his back.

"You know what these are for?" he asked the boy. "These people that don't want to listen and don't know how to act."

One minute later, the officer slid the cuff off the boy's wrist.

Holliday gave him some of the final words, speaking to him about his mom.

"I hope she does beat you when you go home because you deserve it so much for your actions today," she said. "You were horrible."