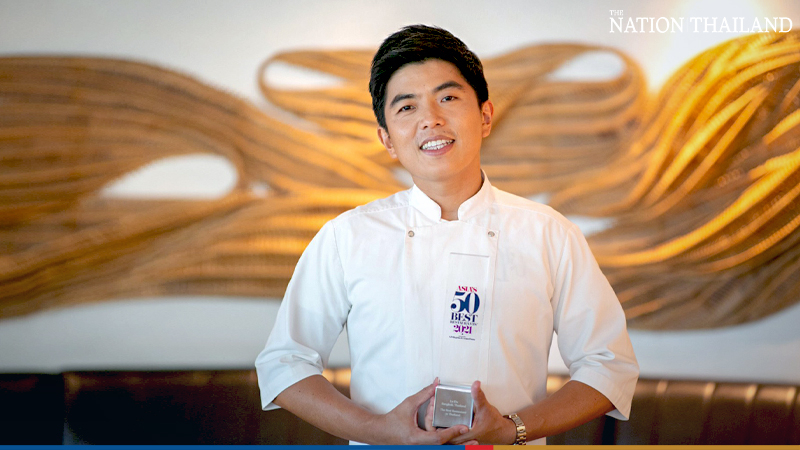 The event captures the essence of Thai pride. In this year's Asia's 50 Best Restaurants 2021 award ceremony, "Thai restaurant by Thai chefs using Thai ingredients" was rated by expert judges panel across Asia. The winner of 4th place which received the most popular restaurant in Asia is Thai restaurant, Ledu, by Chef Ton Thitid Tassanakajohn

Chef Ton Thitid Tassanakajohn, founder of Ledu restaurant, said that “he grown up in the family that grandfather and grandmother were always cooking. I saw every process and recipes in each dish, so I started to practice cooking since then but I hadn’t really trained it well. Then I went to study aboard, I had the opportunity to worked in some restaurant for a while and I enjoyed it but still not take it seriously. After that, I came back to Thailand and entranced in faculty of economics of Chulalongkorn University. After graduated, I started working as investment banker for one famous broker company. I resigned one month after because I realized that it wasn’t the job that I want to do and I don’t want to work in an office, so I went to United States of America to learn how to cook properly. I had an opportunity to worked in many famous restaurants and gained experience for 5-6 years. During that time, I felt that the image of Thai food in the opinion of foreigners is like street food and was rated as a simple food, not seen as a luxury or rated it as high-class food like other western food in Fine dining restaurant and as a Thai person, I want to change that idea. Thai food can also be high-class food like other country”.

The beginning of Ledu – with the passion in upgrading better image of Thai food to all over the world, after Chef Ton returned to Thailand in 2013, he found a suitable location and opened a restaurant named Ledu. The concept is Fine Dining Thai cuisine using Thai ingredients from all regions in Thailand with the menu constantly changing according to the season. Ledu is not using any imported raw materials because he wanted people who come to Ledu taste the best of Thai food and Thai ingredients. He using the cooking experience that he has been learned in aboard adapted to Thai food and also the techniques of placement and serving as well as foreign Fine Dining.

“There are no obstacles because everything is a fun experience”. First month of opening was not yet popular. Maybe LeDu's style is something new. Even Thais are not famously choosing to eat Thai food for special occasions. But with clarity in the concept conciding with a group of people who pleasing with the concept of the chef, casusing LeDu to gradually gain more customers until it became widely known. In the beginning, the team was small with only a few emplyees. You have to do everything yourself. But within a year the team was bigger and more ready. Our chef "Ton" never stopped. He always inventing new menus, because Chef Ton never see LeDu as the best.

In 2015, chef Ton opened the new restaurant called “Baan” located at Wireless road right after the successful of Ledu. In early 2018, Baan expanded to Taipei, which is the first Thai restaurant there. Moreover, Baan received MICHELIN PLATES from MICHELIN GUIDE. Chef Ton still pursued his dream, in 2019, he opened the restaurant called “Samyan” in Philippine, which serves high-end food courts. In early 2020, Chef Ton had a brilliant idea to open a bar called “Mayrai Bar” which planning to locate at Ta Tien. Currently, in June 2020, chef Ton opened “Nusara”, which is the most famous and trending fine-dining in Bangkok at the moment. Nusara got MICHELIN PLATES and won ASIA’s 50 Best Restaurants 2021, at the place of 20th.

In this year, Chef Ton is the first Thai chef who won the most popular restaurant award in Thailand and also 4th place in Asia. He is a representative of the country and creates pride for all Thai people. Chef Ton revealed that even he just received awards but the main goal is to constantly developing yourself and also restaurants. Despite being the first Thai chef to received this award but I believe that in the future, there will be a new restaurant with new generation blood who create a new ideal of food and will definitely go further and better than this.