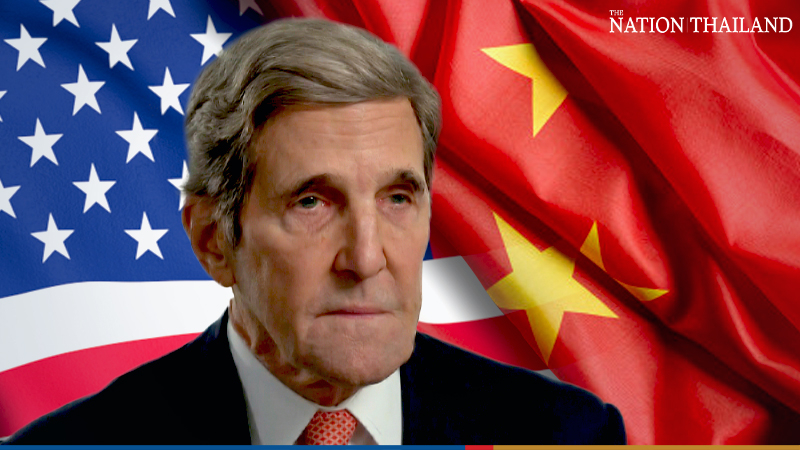 U.S. climate envoy John Kerry is expected to travel to China next week in an attempt to carve out climate change as an area of closer collaboration amid deepening tensions between the two countries.

The former secretary of state is expected to travel to Shanghai for meetings with Chinese officials, according to people familiar with the situation. The trip, less than a month after a face-to-face meeting between senior Chinese and U.S. diplomats in Alaska ended in traded diatribes and insults, would be the first official visit to China by a top Biden administration official.

A State Department spokesman said the department does not have any "travel to announce at this time." China's Ministry of Foreign Affairs did not respond to questions about the potential visit.

Kerry planned to meet with his Chinese counterpart Xie Zhenhua, China's special climate envoy, according to one U.S. official who spoke on the condition of anonymity to discuss the sensitive visit, which could still be called off. Kerry and Xie have already started discussions, according to the State Department.

The trip underlines the Biden administration's efforts to collaborate with - as well as compete against - China as the two sides clash over human rights, trade practices and security while competing for global influence.

Kerry has repeatedly said the global climate crisis should be treated separately, describing it as a "critical stand-alone issue" that requires the world's two largest emitters of greenhouse gases to work together.

The trip would be part of Kerry's tour in Asia through India, the United Arab Emirates and Bangladesh, ahead of a two-day virtual Earth Day summit hosted by the United States on April 22 and 23. In India last week, Kerry said he was "hopeful" but "not confident" that he could count on China's cooperation.

"We want to work with China in doing this. What President Biden has said is, we will have our differences on some issues," he told India Today. "We can't be the prisoners of all of these differences. We must cooperate on climate."

Chinese Foreign Ministry spokeswoman Hua Chunying said earlier this month that Beijing had "received the invitation" to the Earth Day summit "and is looking at it." Without mentioning the United States, Hua said Beijing would "continue to enhance communication and cooperation with the international community."

Observers say climate change is one of few areas where U.S. and Chinese interests could overlap, raising the possibility of restarting talks halted during the Trump administration, which withdrew the United States from the Paris climate accord, a move now reversed by Biden as he tries to position the United States as a leader in limiting climate change. In September, China announced that it aimed to become carbon neutral by 2060.

Following the contentious meeting between U.S. and Chinese officials in Anchorage in March, China's official Xinhua News Agency reported that the two sides had decided to set up a working group on climate change among other modest but specific joint initiatives. But U.S. officials told The Post that no such agreements were made - a point analysts said reflected the Biden administration's aversion to get trapped into Beijing's style of formalized meetings that may or may not produce results.

"These are all things that were without appeal to the U.S. side because it's all process and no substance, and the Chinese have used process as a kind of straitjacket to bind the United States and create the impression that there's more amity in the relationship than there really is," said Danny Russel, a former senior diplomat in the Obama administration and vice president at the Asia Society Policy Institute.

Kerry, an advocate of personal diplomacy in his years as secretary of state and a former chairman of the Senate Foreign Relations Committee, has long valued face-to-face meetings with foreign officials in pursuit of consensus-building.

In February, China's Ministry of Ecology and Environment said Xie's office had been renamed as the country's special climate envoy, a move seen as a response to Kerry's appointment. Xie had headed his country's climate delegation from 2007 to 2018, a time when he would have worked with Kerry, who was serving as secretary of state under the Obama administration.

"China and the United States are two largest emitters in the world. It is not like they have a choice on whether to work together or not," said Li Shuo, senior climate and energy policy officer for Greenpeace East Asia.