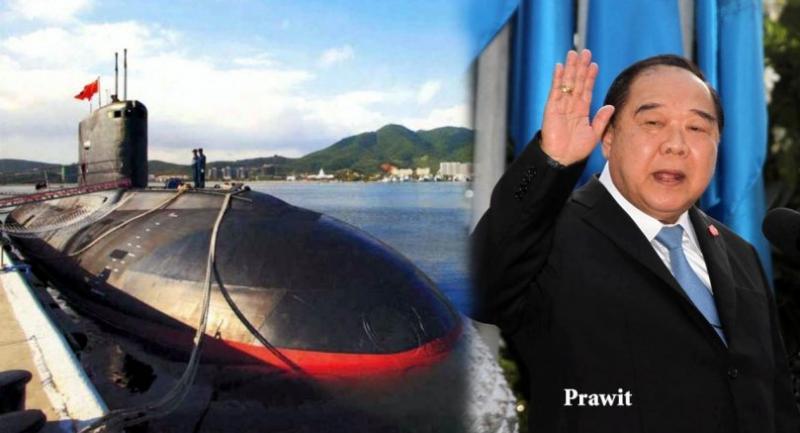 THE CABINET has approved a Navy proposal to buy a Yuan-class submarine from China for Bt13.5 billion, a government source said yesterday.

Deputy Prime Minister Prawit Wongsuwan quietly put the proposal to Cabinet for a decision last week and instructed the Navy Commander Admiral Na Arreenich to finalise the purchasing contract with the designated Chinese manufacturer soon.
The military government had planned to purchase three Yuan-class S26T submarines at a total cost of Bt36 billion. Prime Minister Prayut Chan-o-cha said earlier that Thailand had been offered a “buy two, get three” deal with China, complete with various weapons systems and after-sales services.
However, the Cabinet last week actually approved only the purchase of one
submarine initially, with a budget of Bt13.5 billion, including weapons systems, spare parts and technology transfer.
But no official could give any details on the deal.
Government Spokesperson Lt-General Sansern Kaewkam-nerd said he had no information regarding approval of the submarine deal.
“It is part of the security agenda, which is usually considered confidential to the Cabinet,” he said. “It would not be included in a press briefing after the Cabinet meeting.”
However, Prawit’s adviser Patitan Wattanayagorn said the deputy prime minister would today tell the public about the proposal and approval of the submarine.
“China attaches much importance to this project, so we have to be careful not to say anything about this matter,” he told reporters.
The S26T will be the Thai Navy’s first submarine since the end of World War II. Thailand procured its first submarines from Japan in 1937, but they were decommissioned more than 50 years ago.
The China Shipbuilding Industry Corporation (CSIC) will be the likely main contractor for the Thailand-bound submarine, which will take six years to build. If the contract is secured, Thailand will become the company’s second foreign customer after Pakistan.
Earlier this month, the Cabinet approved the purchase of another 10 Chinese-made tanks at a cost of Bt2 billion.