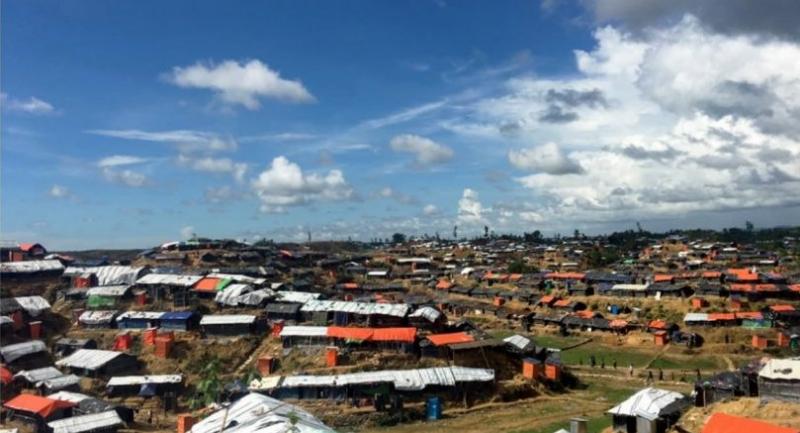 I have visited many poverty-stricken, underserved areas of the world on medical missions. However, my most recent trip to the Rohingya refugee camp in Ukhiya, Cox’s Bazar in Bangladesh, marked the first time that I have ever cried during fieldwork.

Stories of suffering usually affect me after the adrenaline has worn off and the fatigue has set in – most often on my long plane ride back home or during jet-lagged nights as I lie awake, remembering the patients I have left behind.

Children play by the water pump at the base of the refugee camp. -All photos by author unless stated otherwise

This time, however, things were different and the emotional toll my work at the Rohingya camp took on me was greater than ever before.

I had come to Bangladesh as part of the MedGlobal assessment team — a group of doctors, nurses and public health professionals tasked by the NGO with the huge responsibility of determining the needs of the population and initiating a primary health care clinic in the middle of the camp.

One of the pathways leading to the crowded tents of the camp.

One day in the camp, after listening to an elderly lady's breathing to diagnose pneumonia, I went to find water so that she could take her first dose of antibiotics. Upon my return, I found tears in the eyes of my Bengali/Urdu-speaking male interpreter.

After many childhood summers in Karachi, I knew well enough that for a man to show his vulnerability like this in a public place, especially around relative strangers, is not typical in this part of the world. So something must have been very disturbing.

The campsite overlooking the roofs of the tents.

When I asked him what happened, he just shook his head and told me that our patient was describing how she and her frail husband had witnessed their three adult sons being killed by the Myanmar army. They also saw one of their young grandchildren being thrown into a fire.

Despite the unimaginable horrors they had experienced, somehow, the couple managed to travel for days to reach Bangladesh with their granddaughter. The young girl had accompanied her grandmother to the clinic and could not have been older than eight or nine.

MedGlobal Needs Assessment Team along with local staff in the clinic.

The child would get daily rations of food and water for her elderly grandparents. Seeing how this little one was bravely shouldering the responsibility for the care of her aging grandparents not only brought tears to my eyes, but also made me worry about her future. What would happen to her after they are gone?

Maybe she would become like the three children we met as we explored the makeshift refugee camps in the Kutupalong and Balukhali areas of Ukhiya. The site consisted of about 800,000 people and was comprised of tents made from flimsy tarps and bamboo poles pitched on dirt ground, which turned into slippery mud during the monsoon rains.

These children were brought across the border because their parents were killed in Myanmar. They are being raised by distant relatives.

Their story was told to us by a man who spoke both Rohingya and Bengali. He was standing outside of his small tent, in which he lived with his four children, wife and two other family members.

These children just crossed the Naf River to Bangladesh a few hours prior to this picture being taken. Myanmar can be seen in the background.

As he stood outside his makeshift home, he told us another story of the lady in the neighbouring tent, who walked nine days over mountains, at eight months pregnant, with her three other children, to reach safety. Her husband was back in Myanmar, and she was unsure of his fate.

So many women had made this difficult journey by foot or boat while pregnant. These women brought their tiny babies to the clinic to be checked by a doctor; tiny likely due to premature births and lack of hydration/nutrition of the mother, which leads to decreased breast milk production.

One baby sticks out in my memory. She was extremely small and had a sickly appearance. I took her temperature and found out she was flush with fever.

Normally, a baby in her condition would be rushed to the emergency room for blood work, a lumbar puncture, and IV antibiotics. As I tried to keep calm and decide what to do, I asked the interpreter to ask the mother how old the baby was. He replied, “Twenty something days.”

I asked again, saying that I needed a more precise answer. The mother replied and again my interpreter shook his head in sadness: “She says that the baby was born on her journey here, which she had made on foot. She walked for so long that the days and nights blended together, so she does not know how old the baby is.”

In the doctor’s room next door, my colleague was dealing with a similar situation – a malnourished, tiny baby with a fever.

After writing our assessments and findings on a referral form, we spoke to the local staff and arranged a tom tom (rickshaw) to take both babies to the nearest hospital. We returned to the queues of patients waiting for us, busy again with physical exams and dispersing medications.

A few hours later, I asked the clinic manager if the babies reached the hospital safely. He stated, “One of them did. The other one went home with the mother. She said she needed to ask her husband permission to take the baby to the hospital.”

A mother holds her sick child at the clinic. Photocredit: Farida Ahmad

My heart stopped. Did the mother not realise how sick the baby was? That the baby could die? Why did the staff let that happen?

I had a long discussion with the clinic manager about the seriousness of the situation. I asked him to inform us the next time this happens so that we can educate not only the mother, but also the father. This particular scenario really opened my eyes to navigating cultural boundaries and norms.

Many of these patients had never seen a doctor before due to their socioeconomic status in Myanmar. Most of them had acute complaints – respiratory infections, gastroenteritis, dehydration.

There were descriptions by many women of post-traumatic stress disorder, with symptoms of insomnia due to anxiety and flashbacks. But occasionally, I found a case that made me wonder if we were even equipped to provide appropriate treatment in such a resource-limited setting:

The eight-year-old with huge lymph nodes sticking out of his neck, pointing to systemic tuberculosis or cancer; the man with one-sided weakness likely due to a stroke; or the child with a neuromuscular disorder who stopped walking.

Children stand outside what is now their home.

In a proper medical facility, these conditions would easily be worked up with biopsies and MRIs. However due to our lack of resources, all I could do was offer a smile, encouragement, and offer a prayer.

These are just a few of the many horrific stories I heard during my time at the refugee camp. Each of the hundreds of thousands who have fled Myanmar, now and over the years, have a tale equally heart-wrenching.

Since returning home, I have had multiple people tell me that the first time they had heard of the conflict was through me. This has reinforced my motivation to stand up and speak out for this neglected group of people.