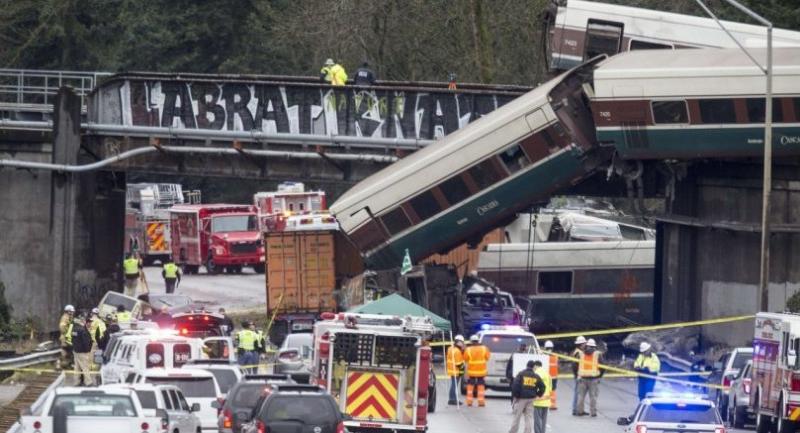 'Multiple' fatalities as train derails onto highway in Washington state

"Multiple" people were killed early Monday when an Amtrak passenger train derailed in Washington state near the city of Tacoma, sending cars flying off a bridge and onto a busy interstate, officials said.

The train, which was carrying 78 passengers and five crew, was part of a newly expanded faster rail service along the route linking Seattle and Portland, Oregon -- featuring new locomotives.

This image from State Trooper Brooke Bova via the official Twitter media page of the Pierce County Sheriff's Department obtained 18 December, 2017 shows the scene of an Amtrak high speed train after it derailled from an overpass on Interstate I-5 highway earlier in the day near the city of Takoma, Washington state. "Multiple" people were killed when the Amtrak passenger train derailed, sending cars flying off a bridge and onto a busy interstate, officials said.

It derailed during the morning rush hour at about 7:40 am (1540 GMT), about halfway between Tacoma and Olympia, the capital of Washington state.

"It's pretty horrific," he said.

This CCTV image released on the Twitter account of the Washington State Department of Transport (@wsdot_tacoma) shows a high speed train after it derailled from an overpass on Interstate I-5 highway on December 18, 2017 in Pierce County, Washington state. An Amtrak passenger train derailed early Monday in Washington state near the city of Tacoma, with one car dropping down onto a busy interstate highway, officials and witnesses said. // AFP PHOTO

Troyer put no number on the fatalities, but local media said at least three people were killed. None of the people in vehicles travelling on the highway below the train were killed, according to Troyer.

Local news outlets reported that dozens of people were taken to area hospitals for treatment.

"When we got to the scene, it was obvious there were fatalities and injuries, and some people were able to get off the train," Troyer said.

"No fatalities on the roadway. As you can see by the large response, we have taken them out and people that were able to walk are under the tents being cared for by multiple groups," he said.

Photographs posted online from the scene showed multiple cars having derailed from the train. At least two dropped onto the roadway below, a busy highway that connects Olympia to the busy Seattle metro area just to the north.

A worker walks the tracks at the scene of a Amtrak train derailment on December 18, 2017 in DuPont, Washington. // AFP PHOTO

The accident snarled morning rush hour traffic and officials warned the highway, Interstate 5, would be blocked in that area for a long period of time.

"We had just passed the city of DuPont and it seemed like we were going around a curve," passenger Chris Karnes told local CBS News affiliate KIRO-TV.

"All of a sudden, we felt this rocking and creaking noise, and it felt like we were heading down a hill," said Karnes, adding that several cars had gone off the tracks and passengers kicked out the windows to escape.

"The next thing we know, we're being slammed into the front of our seats, windows are breaking, we stop, and there's water gushing out of the train. People were screaming."

Karnes said the tracks were supposed to have been upgraded to accommodate higher speeds.

"I'm not sure what happened," he said.