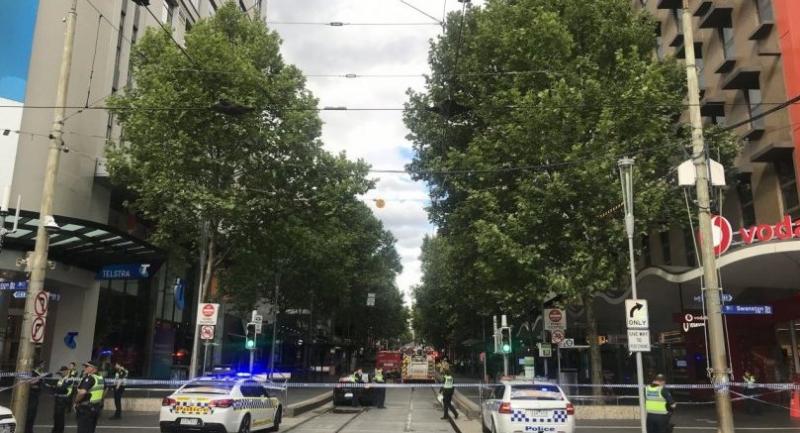 Melbourne - A knife-wielding attacker killed one person and injured two others in a rush hour stabbing rampage in downtown Melbourne Friday, before being shot and captured by police.

Witnesses said the man began attacking pedestrians near a pickup truck apparently belonging to the attacker which had exploded into flames.

Australian police said one person died at the scene and another two others were being treated for their injuries.

They said the suspect, who was hospitalised in a critical condition, had no known links to terrorism.

Witness footage showed police struggling for at least a minute to corral a large man wearing a dark tunic as he lunged, slashed and stabbed wildly at two officers.

At least two members of the public bravely tried to help police. One man was armed with a cafe chair while another -- swiftly dubbed an "Aussie hero" on social media -- repeatedly tried to ram the suspect with an empty metal shopping cart.

But as the attacks continued unabated, eventually one officer opted for lethal force, shooting the suspect in the chest.

"A man was arrested at the scene and has been taken to hospital under police guard in a critical condition," police Superintendent David Clayton said.

"There is no known link to terrorism at this stage," Clayton added. "We will keep an open mind as to whether there is any link. It's very early stage of the investigation."

Police warned people to avoid the area and created a three-block-wide exclusion zone as the bomb squad was dispatched to secure the area and examine the vehicle after the fire was extinguished.

Officers said they "are not looking for anyone further at this early stage".

"The exact circumstances are yet to be determined... The area has been cordoned off," police said, as they called for "anyone with information or who witnessed the incident is asked to go to Melbourne West Police Station to make a statement."

Forensic investigators combed through the scene late Friday, where the dead victim's body lay covered in a white plastic sheet.

Friday's attack is a double blow for the city as it coincides with an ongoing the murder trial of 28-year-old James Gargasoulas, who ploughed his car into crowds in the same area in 2017, killing six people.