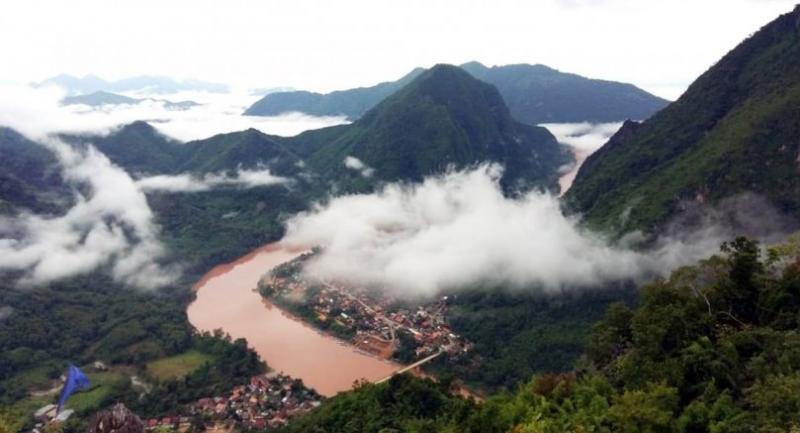 The Phadeng viewpoint and the climb to reach it are among the many breathtaking activities to be experienced in Vangvieng district, Vientiane province.

Many people miss out on this fantastic experience because the climb to the top is not easy and Lao visitors in particular are likely to dismiss the idea, as hiking is not among their preferred leisure activities.

But the view makes the effort worthwhile and word has spread of its magnificence. And if you find yourself in Vangvieng, in the midst of majestic scenery, there’s not much excuse for not including this trek in your itinerary, especially when the rewards are so satisfying.

There are many viewpoints in this area and some have a shelter, and maybe a flag at the top to indicate someone’s visit.

Last month I myself made the trek up to Phadeng, which is perhaps the most well-known of the viewpoints and is located in Ban Phonngeun, about 10 kilometres from the main town of Vangvieng.

We made the trip in the afternoon as we wanted to arrive at the top in time to wait around for the sunset.

A sign and the information provided in the village indicate that the hill is 400 metres high, but it took our group of fit young people about an hour to reach the top.

I couldn’t believe how much energy I expended during the trek. It was the most exhausted I’ve ever felt in my life.

I almost gave up because I felt that it would soon be dark even though it was only about 3pm.  We were walking in the shadow of the hill and through big trees. I wondered if I would have enough energy to walk back but my friends wanted to continue even though they were older than me. But they were really fit.

We made the climb slowly and stopped along the way to sit on a rock and admire the view. Fortunately we had brought insect spray, and enough water to quench our thirst.

We encountered other hikers and asked how much longer it would take us. They smiled and assured us it was not much further.

Then I could hear the voices of people talking but I wasn’t sure how far away they were. But I looked up and saw a hut not that far from us, which meant we were almost there.

When we were close to the peak we found some flowers growing in the rock. They were mauve and very pretty. One of my friends was tempted to touch and pick them but she said flowers were beautiful only when they were left in their natural surroundings.

We took another short break because there were more flowers along the path that engaged our attention but in less than 10 minutes we finally reached the top.

There was a hut with a vendor selling drinks and snacks. I asked for a cold Coca-Cola and talked to the young vendor even though I was still rather breathless, as I was curious to know how she got there.

I struggled to take in what I saw when I looked down over Vangvieng. The scene below me was like a painting, with farms, villages and forests outlined in delicate detail.

I went ahead to another hut and sat down. The breeze caressed my body and face. I breathed in deeply and after a minute I forgot the enormous effort it taken to reach this fabulous spot.

I looked around and saw other people brandishing their smartphones and cameras, taking selfies, photos and videos of the view.

We stayed there for a while until the vendors advised us to head back down as it would soon be getting dark.

We weren’t able to catch the sunset as it was obscured by a hill but we watched the sky turn red as the sun turned the clouds to flames and burnished the landscape with copper.

The descent was easy and we didn’t have to struggle. In less than 30 minutes we were back at our car.

Now I’m thinking of going back but this time I think I’ll go much earlier so I can watch the sunrise, as the locals say that’s the most beautiful time there.