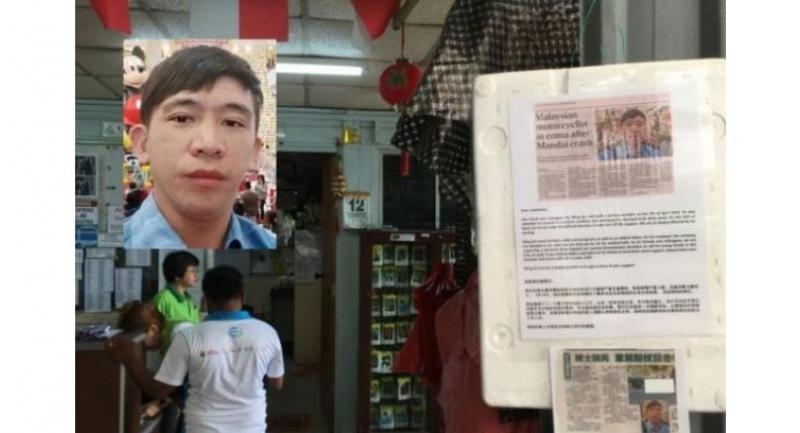 Singapore - The family of a Malaysian motorcyclist who was declared brain dead following a road accident has decided to donate his organs after taking him off life support.

Tan Ming Jia, 30, suffered serious head injuries and went into a coma after a collision with a truck in Mandai on Sunday morning (April 7). He was taken off life support after doctors at Khoo Teck Puat Hospital declared him brain dead on Wednesday.

Explaining the family's decision, his sister Ming Li, 27, said they wanted to help those in need of an organ transplant.

"It is comforting to know that some part of him lives on even if we don't know who the recipients will be," Tan, who works as an accounting administrator, told The Straits Times on Friday.

He would go back to his home town Johor Baru regularly to see his wife and five-year-old son. He had planned to go on Sunday (April 14). His 66-year-old father also lives in Johor.

"He was going to take the family out for a meal on Sunday," said Li.

Tan, who was the sole breadwinner of his family, had worked at World Farm, a wholesale garden centre, for four years.

The company not only paid for his medical bills but also started a donation drive for his family.

"I believe in doing what I can to help," said his employer, who wanted to be known only as Chua. "I treat all my employees like my own children."

She admits feeling limited in her ability to help support Tan's family.

"I am only one person. But I thought about the customers who often asked to be served by him. I hope they would chip in to help now," said Chua.

Since World Farm put up a post on its Facebook page appealing for donations, many have responded.

Some, like Alex Eng, 44, turned up in person at World Farm's nursery in Khatib to make a donation.

Others who wish to help can also do so through online fund-raising platform Give.Asia.