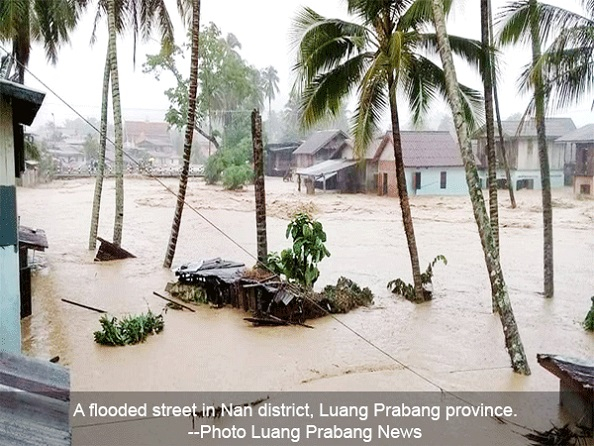 Nan district Governor, Mr Sivone Vongkhamchanh, told Vientiane Times that the night long downpour caused flooding in low-lying areas of the district.
“At 7am the Nan River overflowed and flooded Nafai, Paphai, Simoungkhoun, Nalao, Phonhin, Sibounheuan, That and Nakhern villages, with at least 372 families affected according to initial reports,” he said.

“Local authorities are helping to move the villagers to safe areas and have been using boats to take their belongings to higher ground. Fortunately, no one has been injured or killed,” he added.
“The water level started to fall around noon on Tuesday when the rain eased,” Mr Sivone said. Authorities are now assessing the damage caused to houses, farmland and other property.
Meanwhile, people in northeast, central and southern regions of Laos are advised to be on the alert for severe weather while a tropical depression passes over the country from July 30 to August 4, according to a warning issued on Monday by the Meteorology and Hydrology Department, Ministry of Natural Resources and Environment.
A weather warning for strong winds and heavy rain has been issued for the capital and the provinces of Phongsaly, Huaphan, Xieng Khuang, Luang Namtha, Oudomxay, Bokeo, Luang Prabang, Xayaboury, Xaysomboun, Vientiane, Borikhamxay, Khammuan, Savannakhet, Saravan, Champassak, Xekong and Attapeu.
During strong winds, people are advised to keep away from advertising signboards, trees and other unsecured structures at risk of collapse.
People who live in low-lying areas along rivers should be aware of the possibility of heavy rains, flash floods, landslides and other hazards. Everyone is advised to check weather forecasts issued by the department while monitoring national and local news for weather updates.