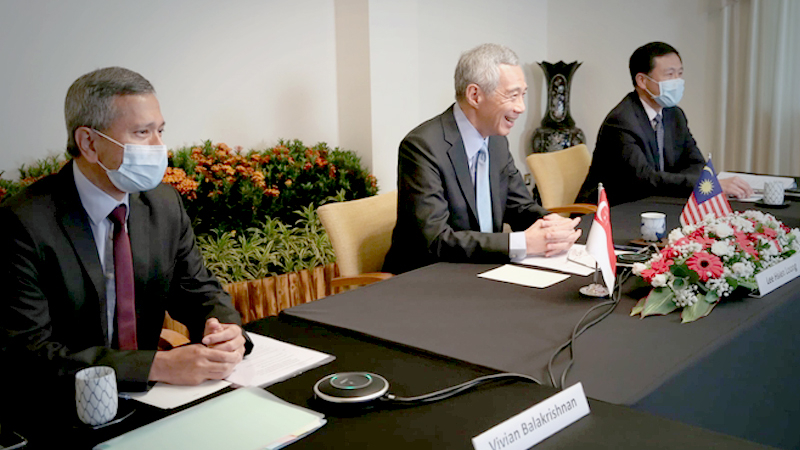 They took stock of the progress of discussions on the project, and gained a good understanding of Malaysia's and Singapore's respective positions, the Prime Ministers added.

Their discussion comes ahead of the Dec 31 deadline for the second and final extension of the suspension of the bilateral project.

"Both sides will announce further details on the HSR project through a joint statement in due course," the leaders said in their statement.

"Both Prime Ministers also reaffirmed the strong bilateral relations between the two countries covering many areas of cooperation and the sincere desire to further strengthen these relations for mutual benefit," they added.

Their joint statement comes in the wake of remarks by both countries on discussions over changes to the project, which was first announced in 2010.

The proposed 350km line would cut travel time between the two cities to 90 minutes, compared with over four hours by car.

Last Wednesday, a spokesman for Singapore's Ministry of Transport (MOT) said Malaysia had proposed some changes to the HSR project, adding that Singapore has been discussing them in good faith with Malaysia.

He said Malaysia had made several new proposals to "improve" the project, and was still in the process of negotiating these with Singapore.

The remarks come after a news report by Malaysian website Free Malaysia Today last week claimed KL was considering changes so that the line ends in Johor Baru and not Singapore, a move that would call into question the sustainability of the project.

In response to the report, the Singapore MOT spokesman said last week that Singapore continues to believe that the HSR project is beneficial for both countries, and remains fully committed to fulfilling its obligations under the HSR bilateral agreement.

"We will make our best efforts to conclude discussions with Malaysia by Dec 31, 2020," the spokesman said, adding that if, by Dec 31, Malaysia does not proceed with the project, it will - under agreements between both countries - bear the agreed costs incurred by Singapore in fulfilling the HSR bilateral agreement.

Both countries signed the bilateral agreement, a legally binding international pact, in Putrajaya in December 2016, witnessed by PM Lee and then Malaysian PM Najib Razak.

But after a change of government following the 2018 Malaysian general election, then PM Mahathir Mohamad initially wanted to scrap the HSR as part of a review of mega projects.

The Pakatan Harapan administration later clarified that it wanted to delay the start of construction, as a cancellation would have entailed a high amount of compensation under the HSR agreement.

Both countries then agreed to suspend the project, at Malaysia's request.

The first extension in September 2018 ended in May this year, but the suspension was extended for a second and final time, till Dec 31.