A suicide bomber blew himself up outside a packed Roman Catholic cathedral on the country’s Sulawesi island during a Palm Sunday Mass, wounding at least 14 people, police said.

A cellular video obtained by The Associated Press showed body parts scattered near a burning motorbike at the gates of the Sacred Heart of Jesus Cathedral in Makassar, the capital of South Sulawesi province yesterday.

The attack came as Indonesia was on high alert following the arrest of Aris Sumarsono, known as Zulkarnaen, the leader of Jemaah Islamiyah (JI) in December.

Wilhelmus Tulak, a Catholic priest who led the Mass when the bomb exploded at about 10.30am, told reporters that a loud bang shocked his congregation who had just finished the Sunday service marking the beginning of the Holy Week before Easter.

The first batch of churchgoers was walking out of the church while another group was coming in when the blast happened, he said.

He said that security guards suspected two motorists who wanted to enter the church.

One of them detonated his explosives and died near the gate after being confronted by guards.

National Police spokesperson Argo Yuwono told a news conference in the capital, Jakarta, that police were still trying to identify two attackers on a motorbike who used powerful explosives.

“There were two people riding on a motorbike when the explosion happened at the main gate of the church – the perpetrators were trying to enter the compound, ” he said.

“The bike was destroyed and there are body parts... We’re still collecting parts and trying to identify the sex of the perpetrators.”

He added that police were investigating whether they were linked to a local affiliate of the banned JI network or were acting independently.

Meanwhile, President Joko Widodo urged people to remain calm and said everybody could worship “without fear”.

“I strongly condemn this act of terrorism and I have ordered the police chief to thoroughly investigate the perpetrators’ networks and tear down the networks to their roots, ” he said in an online broadcast following the attack. A policeman directing traffic after the explosion.

“I call on everyone to fight against terror and radicalism, which go against religious values.”

At least 64 suspects had been detained by Indonesia’s counterterrorism squad, known as Densus 88, in several provinces, including 19 last month in Makassar.

The arrests followed a tip-off about possible attacks against police and places of worship. 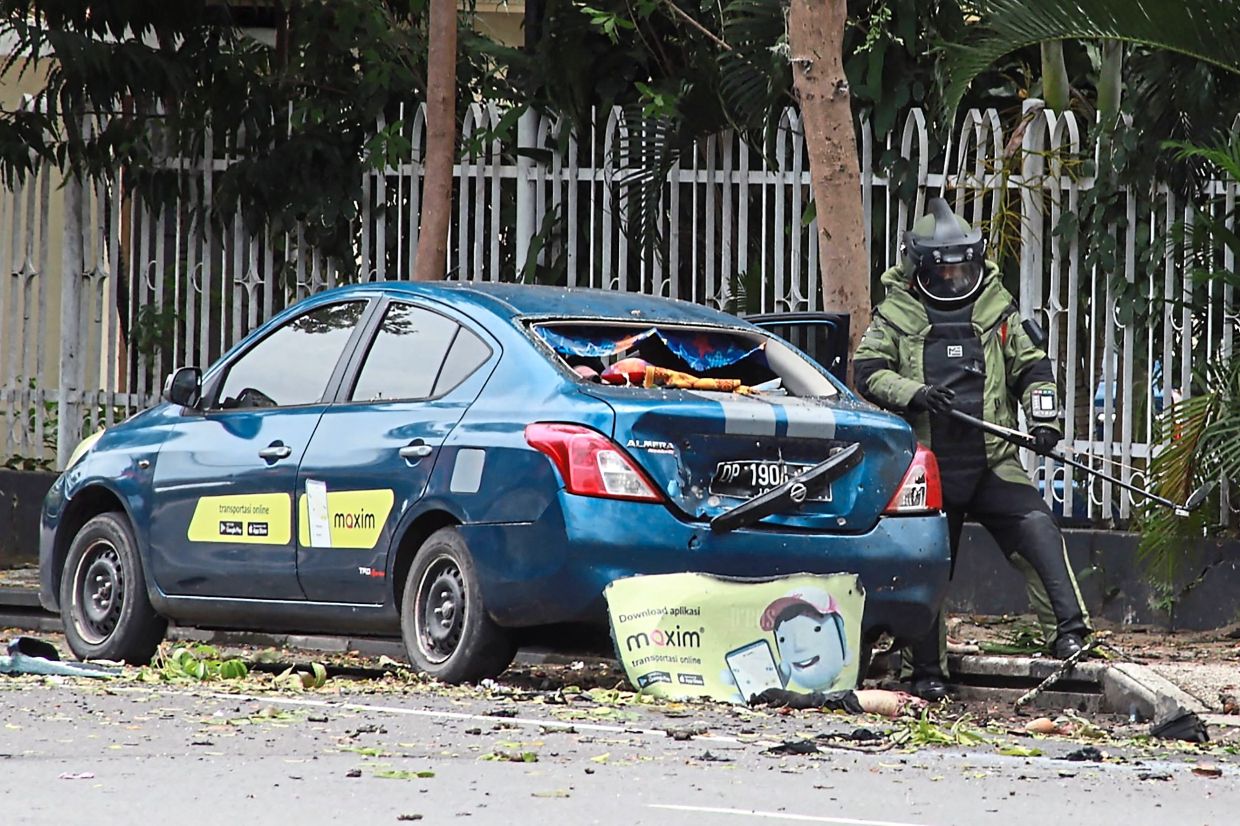 A member of the national bomb squad collecting evidence at the site of the bombing.

In his Mass for Palm Sunday yesterday, Pope Francis said he prayed for all the victims of violence “especially those of this morning's attack in Indonesia, in front of the Cathedral of Makassar”.

Indonesia, the world’s most populous Muslim-majority nation, has been battling militants since bombings on the resort island of Bali in 2002 killed 202 people, mostly foreign tourists.

Attacks aimed at foreigners have been largely replaced in recent years by smaller, less deadly strikes targeting the government, police and anti-terrorism forces and people militants consider as infidels. — Agencies

U.S. to maintain travel restrictions due to Delta variant

Thailand sees 23% rise in new businesses in first half