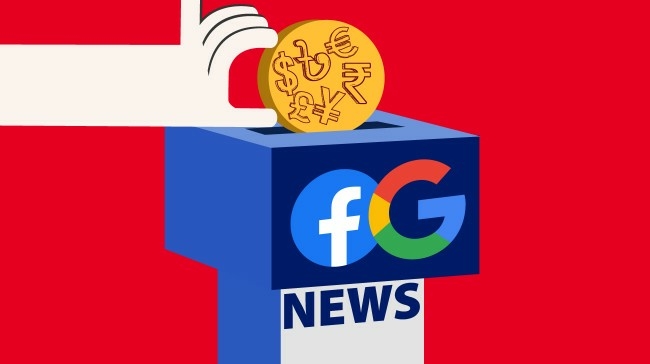 Why Facebook and Google must pay for news everywhere

Australia's recent attempt to make Google and Facebook pay for news content is one of many considered ways to strike a balance in wealth generation between the creative and the tech sectors. The problem statement for that policy was simple: news organisations create unique content; search and social media use the content to invite advertisers to their platforms. As a result, ads get siphoned off from TV and news media to social media -- for every AU$ 100, $81 goes to Google and Facebook.

In March 2020, Australian Associated Press (AAP) announced it was going out of business -- before miraculously being acquired by "philanthropists" who believed in the diversity and impact of independent journalism.

To avoid news outlets losing their business without alternatives, the Australian government wanted Facebook and Google to license news content from the agencies. Google agreed, Facebook shut down news content altogether in Australia on February 18 this year, blinding the country to any flow of information just days before rolling out its vaccination campaign, and blocking everyone from Canberra to Tasmania from sharing news articles -- even articles related to Covid-19.

The global advertising market is expected to rebound this year, reported Zenith -- a global ROI agency -- in December last year. Zenith previously predicted a 9% shrink in global ad spending due to the Covid-19 pandemic, but reported a heavy shift towards digital advertising in the latter half of 2020, updating the market shrink to 7.5%. By 2021, digital ad revenues are set to account for more than 50% of global money spent on advertising, indicating that global digital transformation is well and truly underway.

Zenith also reports that 52% of all ad spending in 2020 -- worth an astounding US$ 620 billion -- was led by search and social media, i.e. Google and Facebook. The Covid-19 pandemic has entirely altered consumption patterns worldwide and spearheaded the digital transformation. By 2023, 58% of global ad market cash flow will go to the digital sphere. Bangladesh, experiencing the second-fastest ad market growth, has been estimated to be worth US$ 1,311 million (Tk 11,165 crore) in 2020.

Many experts claim the figures are underreported and that there has been a large shift of SME investment in digital advertising, especially during the Covid-19 pandemic last year.

All this begs the question: What do search and social media uniquely do to gravitate the money away from news outlets?

For instance, if we search "sports", we will find a round-up of sports news of the day; if we search Bangladesh-New Zealand T20, we will find a narrower search result -- thanks to the SEO work done by the news publishers -- providing accurate content results at the top matching our searches.

Outside of Google News, publishers compete with each other to find themselves at the top of Google search results. A combination of topnotch SEO work and a history of good, organic writing ensures excellent domain authority ranks (on a scale of 100) which the publishers peddle later on to send their content on top of Google searches.

Facebook -- leveraging its superior ad-tech -- tracks news consumption of users on its platform and invites companies to place "targeted" ads to reach the "right" consumers. Therefore, a tech enthusiast regularly checking Techradar will find ads regarding the latest iPhone, Samsung and OnePlus; a travel junkie will get sponsored ads regarding resorts in Bali, etc -- ads that were once meant for newspaper placements.

Recent data has also shown almost half of news consumers are satisfied only reading the headline and the summary that's provided for them on the platforms. Another study in the United States has illustrated that this change in news consumption pattern ensures readers prefer to find their news on Facebook and Google. To readers, this appears to be more convenient.

Search and social media giants, on many previous instances, refused to share data regarding news consumption patterns to the news organisations. The platforms are able to utilise news consumption data to craft better and convenient news ecosystems to retain users within their platforms. But news outlets, relying solely on page referrals and website visits, struggle to "internet" albeit creating the news content and analyses Google and Facebook are peddling mostly to their benefit.

Facebook and Google contend that they are bringing thousands of click-throughs and unprecedented levels of reach every day for news outlets. However, US Senate Committee of Commerce, Science and Transportation report has suggested that both Google and Facebook host the click-through on their portal through "Accelerated Mobile Pages" and "Instant Articles" respectively.

In 2020, at least 60% of regional newspapers in Bangladesh shut down their businesses after struggling to cope with the Covid-19 pandemic. This meant at least 1,600 employees lost their jobs immediately. Fahim Ahmed, chief news editor of Jamuna Television, stated in a 2019 interview that ads worth Tk 50,000 per minute in 2003 were now going at Tk 500 per minute. For many news publishers in the country, search and social media domination appears in the form of low and often delayed salaries, a struggling -- and often absent -- employee benefits scheme and layoffs.

Without any appropriate compensation made for the unique content, the often unbearable responsibility to report keeps tugging at the weight of public-interest journalism. News organisations have always cooperated for content, but behind the curtains, were the first to be unfairly compromised for profit and data.

Both Google and Facebook have vigorously maintained that their conduct is within "fair use". The US Senate Committee of Commerce, Science and Transportation report identified that tech giants have weaponised "fair use", veiling behind a self-reinforcing dynamic that retains users but refuses to help content producers. For instance, The Wall Street Journal, back in 2017, decided not to participate in a Google news programme -- "first click free" -- that allowed Google users to bypass the Wall Street Journal (WSJ) paywall. Subsequently, WSJ found that their online traffic from Google dropped by 44%. Chief executive of News Corp (WSJ's parent company), Robert Thomspon, also commented that publishers either had to comply or disappear from Google search.

In another instance, when Spain decided to mandate compensation to news content creators for the use of headlines and summaries, Google responded by withholding the news-focused product in Spain altogether. Search and social media's "legal" advantage has continuously superseded moral responsibility to protect the same groups who provided them with content, artificially brewing a market failure for public-interest journalism.

In February 2019, the Bangladesh government asked Google, Facebook, and other digital platforms to provide a report on digital ad revenues generated from the country, but got no response. From July 1 of the same year, the Bangladesh government decided to implement VAT on the advertisements made on the digital platforms by local firms. The policy mandated digital giants to either set up offices in Bangladesh or appoint agents such that the government can collect the VAT.

It was more than a year -- on September 2020 -- that Facebook decided to pay Tk 1.7 crore as VAT for July and August 2020. Facebook has resisted all pressure from the government to set up offices in Bangladesh, one of their largest markets.

Worldwide claims to make search and social media pay for news are all infused to save public-interest journalism, in absence of which, fake news and disinformation take over. The Guardian confirmed that the 5-day news blackout on Facebook Australia gave rise to unreliable citizen journalism, hosting a plethora of disinformation, misinformation, and fake news regarding the Covid-19 vaccination campaign, including but not limited to anti-vaccination rhetoric.

Critics for big tech can easily ask to pass the baton over to the government to pay or subsidise public-interest journalism. But if we are living in a world of "fair use" and "equitable" wealth, pursuing the true essence of capitalism, then it becomes a crucial aim to draft policies that strike a balance in payments made and payments deserved. Some critics will wag statistics to say news organisations "couldn't be big enough."

Reporters need salaries to survive, equipment and maintenance require money, printing the news requires money. But journalists' call for equitable financial distribution is not being taken seriously. If news organisations don't survive, what will search and social media disseminate to bring in digital revenue?