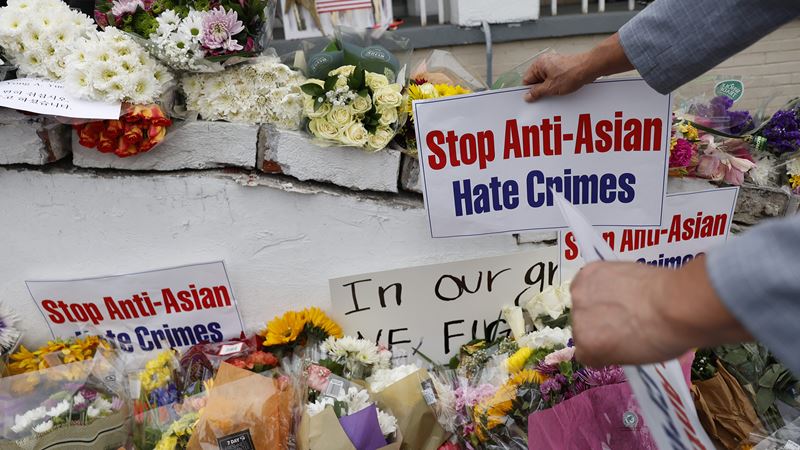 Nearly every state has a hate-crime law. Why dont more people use them?

Almost all of the states and the federal government have laws against hate crimes, meant to put an end to threats or violent attacks aimed at people because of their identity. But theres a catch: Across the country, those statutes are rarely used, experts say, yielding few investigations, arrests or prosecutions after alleged hate crimes occur.

Researchers, advocates and law enforcement officials have described a breakdown at nearly every step of the justice system leading to a disturbing conclusion: Hate crimes go unpunished.

"Every step of law enforcement in this area is failing," said Jeannine Bell, a law professor at Indiana University.

It's difficult to precisely quantify the extent of the problem because there is no reliable, comprehensive data on these types of crimes, which can be defined as offenses based on the victim's race, ethnicity, religion, sexuality, gender, gender identity or disability. And the lack of reliable numbers itself is also an impediment, obscuring the true toll of hate crimes.

But available federal data indicates a yawning gulf between the number of incidents that happen and what's officially recorded. Police departments across the country reported just 7,134 hate crimes to the FBI in 2019, the most recent numbers available. Yet, when asked in surveys, victims report an average of more than 200,000 hate crimes per year, a Justice Department analysis found.

In recent months, the country has witnessed a string of high-profile attacks on Asian Americans, including brutal assaults on the elderly in California's Bay Area and New York, and a mass shooting at Atlanta-area spas that killed eight people, including six Asian women. They have come during a year of racist, pandemic-inspired rhetoric that at one point flowed from the nation's highest office. And this week, the Senate issued a bipartisan rebuke to that violence, passing a bill to improve authorities' response to such crimes.

The attacks on Asians, along with a surge of white-supremacist violence and an ongoing reckoning with racism in the United States, have shone new light on the nation's hate-crime laws and authorities' struggle - some say failure - to use them.

Here are some of the most commonly cited issues, from residents who are wary of police not wanting to report incidents, to officers not taking them seriously and prosecutors refusing to bring charges.

The problems can begin right away, in the hours and days after a crime occurs. Will the victim report it? Will the police take it seriously?

Too often, experts say, the answer to one or both of those questions is no.

The Justice Department analysis - which examined survey data from 2013 to 2017 - estimated that fewer than half of the 200,000 annual hate crimes are reported to police. And of those, just 45 percent are reported as hate crimes.

One reason for this gap, Bell said, is that in most places police departments aren't set up to recognize and respond to hate crimes, which are most often cases of low-level assault or vandalism.

"This is not crime that the police care about," she said. "There isn't a policing apparatus in the vast majority of places that is attuned to hate crimes."

There is also a long-standing lack of trust between law enforcement and communities of color, along with some immigrant communities, making people leery of calling the police, said Steve Freeman, vice president of civil rights at the Anti-Defamation League (ADL).

At the Matthew Shepard Foundation - named for the 21-year-old whose murder became a symbol for the gay rights movement - advocates often field emails from LGBTQ people recounting abuses they have suffered when targeted for their sexual orientation or gender identity. Again and again, the writers say they aren't going to report the crimes because they live in a state without LGBTQ nondiscrimination laws, said Judy Shepard, mother of Matthew and president of the foundation's board.

"They worry about retaliation, about revictimization," Shepard said. "They'll report to community centers, but they won't tell the police."

And in some immigrant communities, residents still carry perceptions of the police from their home countries, where authorities may have been violent or corrupt, said Sgt. Donnell Walters, president of the Ethical Society of Police and head of the community engagement unit at the St. Louis Police Department.

The answer to these issues is better, smarter policing, Walters said.

More officers should get to know the communities they serve better, he said, rather than showing up only at the scene of a crime or to enforce drug laws. But there should also be more education - of police and residents, because many people in both camps don't understand hate-crime laws. In his nearly two decades as a police officer, Walters said he cannot recall ever responding to a hate crime or receiving training on how to identify and handle them.

Local prosecutors should play a larger role in teaching officers and even citizens the law, Walters said.

"We have to hold more than just law enforcement agencies accountable for officer behavior," he said. "We need to start holding the judicial system and the presentation of laws accountable. We owe it to the community."

Shanlon Wu was a young federal prosecutor in Washington, D.C., when a local case came across his desk: A shove and a slur - enough, he thought, to push for a hate-crime charge under the District's statute.

But, Wu recalled, his supervisor advised him against it. Don't make the case harder than it already is, he said, we don't need another thing to prove. Wu listened then, but regrets it now.

"That is really an example of the prosecutors being very risk averse," he said.

Not only is that mind-set damaging to a community's trust in the justice system, Wu said, it is inaccurate. Because many hate-crime laws involve sentence enhancements - increasing the severity of punishment for an existing charge - prosecutors aren't tasked with proving a separate crime.

And charging a hate crime, he said, does not necessarily make the underlying crime harder to prove - but it does send a message that these offenses matter. Conversely, he added, having these laws on the books without using them sends a message that they don't.

Another misconception that Wu and other experts identified: The idea that it's more difficult to prove intent in hate-crime cases. It's no different from what happens "constantly, every day in courtrooms," where prosecutors must use circumstantial evidence to show a defendant's intent.

"With hate crimes, there seems to be this misconception that someone needs to be shouting something to prove that," said Wu, who also served as counsel to then-Attorney General Janet Reno.

The fact they're considered different is evidence of the problem, Wu said, describing a systemic bias.

"It's not really different, it's only thought of as different by prosecutors," he said. "The averseness to using hate-crime statutes comes from the inheritance of implicit racism."

But charging a defendant with a hate crime doesn't guarantee a prosecution - far from it. ProPublica, the nonprofit investigative journalism outlet, examined five years of cases reported to Texas police as potential hate crimes. Of the 981, ProPublica found just eight convictions.

Some were dismissed for lack of evidence and others went unsolved. In many cases, prosecutors probably thought they couldn't prove the defendant's motivation, the report said. But several also conceded that they wield the charge as a bargaining tool in plea deal negotiations, using the prospect of a hate crime to secure a certain sentence then agreeing to drop that count.

The laws themselves are often confusing and can vary state to state, offering uneven protection for different people and from different crimes.

Hate-crime statutes have their roots in 1960s civil rights laws, which forbade discrimination on the basis of race, religion and national origin. In 1979, the ADL conducted its first audit of antisemitic incidents, which helped lay the groundwork for the group's first iteration of a model hate-crimes bill. Around that time, the first states began passing legislation to punish hate crimes, with California, Oregon and Washington among the earliest adopters.

Efforts to deal with bias-motivated crime accelerated after the 1993 Supreme Court case Wisconsin v. Mitchell - which involved a young Black man, Todd Mitchell, who was found to have assaulted a White boy because of his race. The decision affirmed that sentence enhancements for hate crimes are constitutional and do not violate a defendant's First Amendment rights. The ruling jump-started state-level efforts to tackle hate crime, said Freeman, of the ADL.

The federal government also has its own law against hate crimes, but the Justice Department almost always defers to states, making what happens locally even more important. But state laws are a patchwork.

South Carolina and Wyoming are the only two states without a hate-crime law on the books. The Brennan Center for Justice, a nonpartisan law and policy institute, does not count North Dakota's law because, it says, "lawmakers and law enforcement within North Dakota do not believe they have a hate-crimes law" and "no one has ever been charged of a hate crime" under the existing statute.

The ADL has also called Arkansas' just-approved measure a "sham" and refused to classify Indiana's statute as a hate-crime law because it excludes from its protected classes gender identity, gender and sex, and its language is too broad and vague, the group has argued.

Arkansas and Indiana are not the only states with laws omitting certain people. Just 20 states have what the ADL defines as a "fully inclusive" statute, which includes protections for the following categories: Race, religion, ethnicity, sexual orientation, disability, gender and gender identity. Most often, it's gender identity and sexual orientation left unaddressed, which means the laws fail to protect gay and trans people, Shepard said.

"We've even gone backwards in some places," she said. "Over half the states may have hate-crime laws, but they don't protect the gay community."

Elsewhere, battles have broken out over who the measure or proposal includes - namely, police officers. Some conservatives have equated animus directed at law enforcement with that directed at communities of color, but Freeman said such thinking "takes away the impact and the concept of the law."

"Attacks on police officers are already well protected everywhere," he said. "It's a misunderstanding of what a hate-crime law is."

Still more differences exist in states' data collection requirements: Some tell agencies that they must track and report hate crimes; 17 states do not. Predictably, this has led to shoddy, incomplete statistics, further muddying the picture of bias-motivated offenses. Even federal law - the Hate Crime Statistics Act of 1990 - is toothless because it does not hold to account localities that fail to comply.

To wit: 86 percent of the country's law enforcement agencies did not report a single hate crime to the FBI for its 2019 Crime in the United States report. Seventy-one cities with over 100,000 residents - including state capitals and major metropolitan centers - reported zero hate crimes, a metric that demonstrates how absurdly incomplete the data is, experts say.

The reasons for this range from a lack of funding, to poor training, to officials actively seeking to play down the number of hate crimes locally to avoid having their cities tagged as discriminatory, Freeman said.

Ultimately, hate-crime laws - like the crimes themselves - have an impact that radiates beyond an isolated case, advocates say. When the laws are enacted and used, they say, it sends a message that officials are taking the crimes seriously.

"For so many minority communities there is the concept of erasure - that their history here and the violence against them has been erased," Wu said. "When you have a law on the books that you don't use, it's like erasing the law."