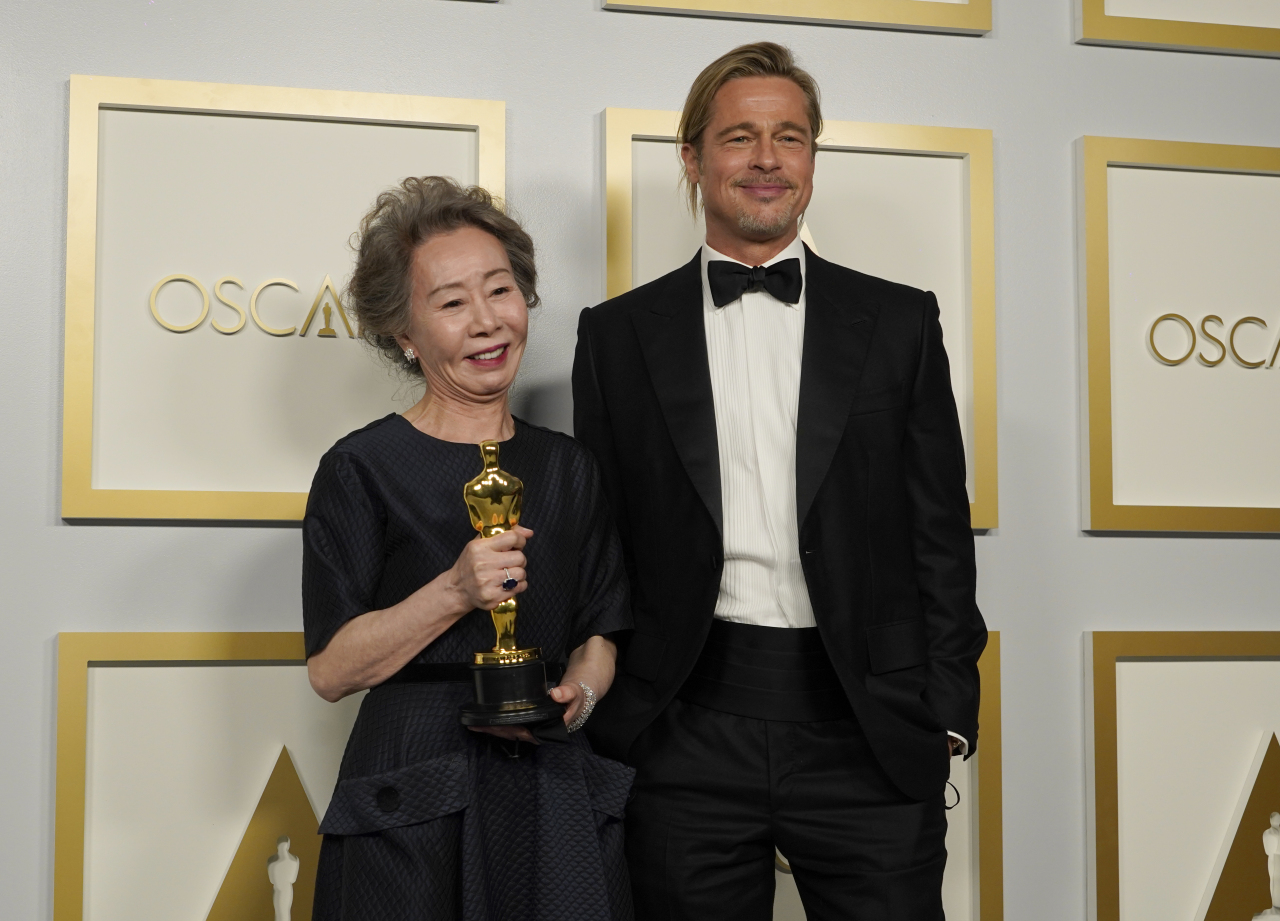 Veteran actor Youn Yuh-jung, 73, won the best supporting actress prize at the 93rd Academy Awards on Monday for her portrayal of eccentric grandmother Soon-ja in the US film “Minari.”

Youn became the first Korean to win an Oscar trophy in an acting category. No other Korean actor, including those from last year’s breakthrough Oscar winner “Parasite,” had received any trophies from the Academy Awards.

“Tremendous thanks to Academy members who vote for me,” Youn said during her acceptance speech made at Union Station in Los Angeles, where this year‘s ceremony was held in a hybrid form.

“He was our captain and my director, so thanks to him,” she said.

“Minari” depicts the story of a first-generation Korean immigrant family of four -- dad Jacob (Yeun), mom Monica (Han), son David (Kim) and daughter Anne (Cho). The family relocates to rural Arkansas to pursue the American dream. One day, grandma Soon-ja comes to America to look after the two kids. At first, David does not like Soon-ja, but as they spend time together she starts to grow on him.

In her speech, Youn spoke modestly about her win.

“I don’t believe in competition. How can I win over Glenn Close? I’ve watched her so many performances. All five nominees are winners of different movies,” she said.

The four other actors vying for the prize were Maria Bakalova for “Borat Subsequent Moviefilm,” Glenn Close for “Hillbilly Elegy,” Olivia Colman for “The Father” and Amanda Seyfried for “Mank.”

She ended her speech by showing gratitude to late director Kim Ki-young who helmed her first movie “Woman of Fire.” That came out in 1971, with Youn portraying housemaid Myungja.

“I like to dedicate this award to my first director Kim Ki-young, who was a very genius director. I think he would be very happy if he was still alive,” Youn said.

Meanwhile, President Moon Jae-in posted a message on his social media congratulating Yoon on her win.

“Becoming the first Korean to win the Academy Award for best supporting actress has a very special meaning because she wrote a new history to Korea‘s 102-year-long cinema history,” Moon wrote. “Also, it is meaningful because second-generation Korean Americans Lee Isaac Chung and Steven Yeun worked together to achieve this.”

Moon continued, “The movie depicted a universal life of mankind through a family’s immigration story and showed that we are all closely connected even though we are living in different places. Youn’s acting shined in her lively performance as a Korean mother and grandmother figure.”

In addition to Youn’s nomination, “Minari” had earned five other nominations at the Academy Awards -- best picture, best directing, best original screenplay and best score. Steven Yeun was also nominated for best actor for the film.

Anthony Hopkins won best actor in the leading role for “The Father” and best actress went to Frances McDormand for “Nomadland.”