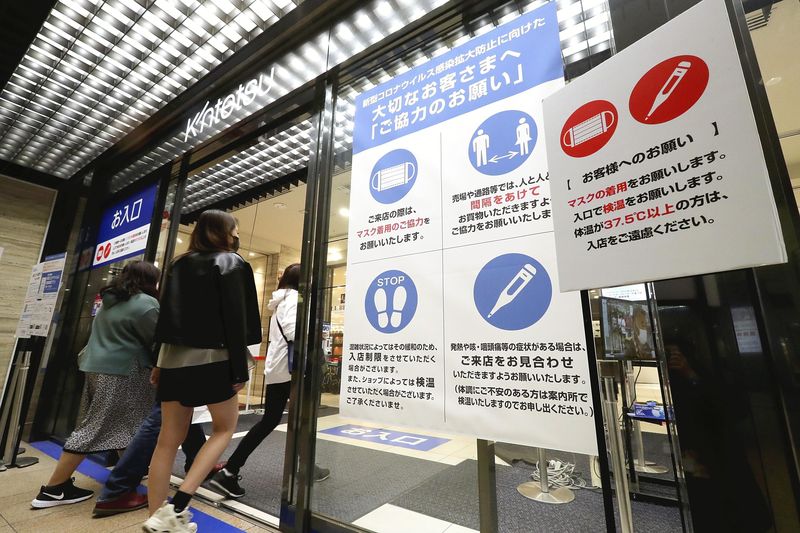 A week has passed since the third pandemic-related state of emergency, was declared in the four prefectures of Tokyo, Osaka, Hyogo and Kyoto. A wide range of locations, such as large commercial facilities and restaurants serving alcohol, have been asked to close during the emergency, prolonging the struggles of department stores and eating and drinking establishments.

The closure requests issued to large commercial facilities allow sales areas providing daily necessities to be open for business, but what constitutes a daily necessity is unclear. Other than food, department stores are not in agreement when it comes to continuing to sell cosmetics or other items.

The Matsuya Ginza department store in Chuo Ward, Tokyo, has closed all floors except those selling food and cosmetics. A Hokkaido fair has been held to sell bento boxed meals featuring seafood and other delicacies from the northern prefecture, but compared to the same time frame in 2019 when events related to the start of the Reiwa era were held, sales are down 80%. During the first state of emergency last year, the store was entirely closed during the Golden Week holidays.

The Takashimaya Osaka department store in the Namba area is only selling food. Sales of such items have apparently declined by about 20% compared to figures before the third emergency.

Kintetsu department store’s flagship location in the Abeno Harukas complex in Osaka is also only open for sales of food and reportedly is seeing a decrease in customers.

Department stores of the Isetan Mitsukoshi group are offering a service that allows customers to consult with sales staff about products they want through a smartphone app’s chat function. The number of inquiries about the app has tripled since the third emergency was declared. This service is reportedly popular among customers in rural areas who are not traveling during the long Golden Week holidays.

Restaurants that are closing early, at 8 p.m., are also facing a difficult situation.

In order to stay open, family restaurant chain Saizeriya has stopped serving alcohol at its outlets mainly in the four prefectures under the emergency.

An official of a major restaurant chain lamented, “Turnover at restaurants is becoming extremely severe.”

Many izakaya Japanese-style pubs remain closed in the four prefectures.

The trend of people refraining from going out has been a driver of strong sales at supermarkets around residential areas. Some supermarket operators have even stopped distributing circulars to ease congestion in their stores.

Products to help pass the time at home are also selling well.

The operating company, however, has had to temporarily close its six Ario shopping centers in Tokyo and Osaka Prefecture.