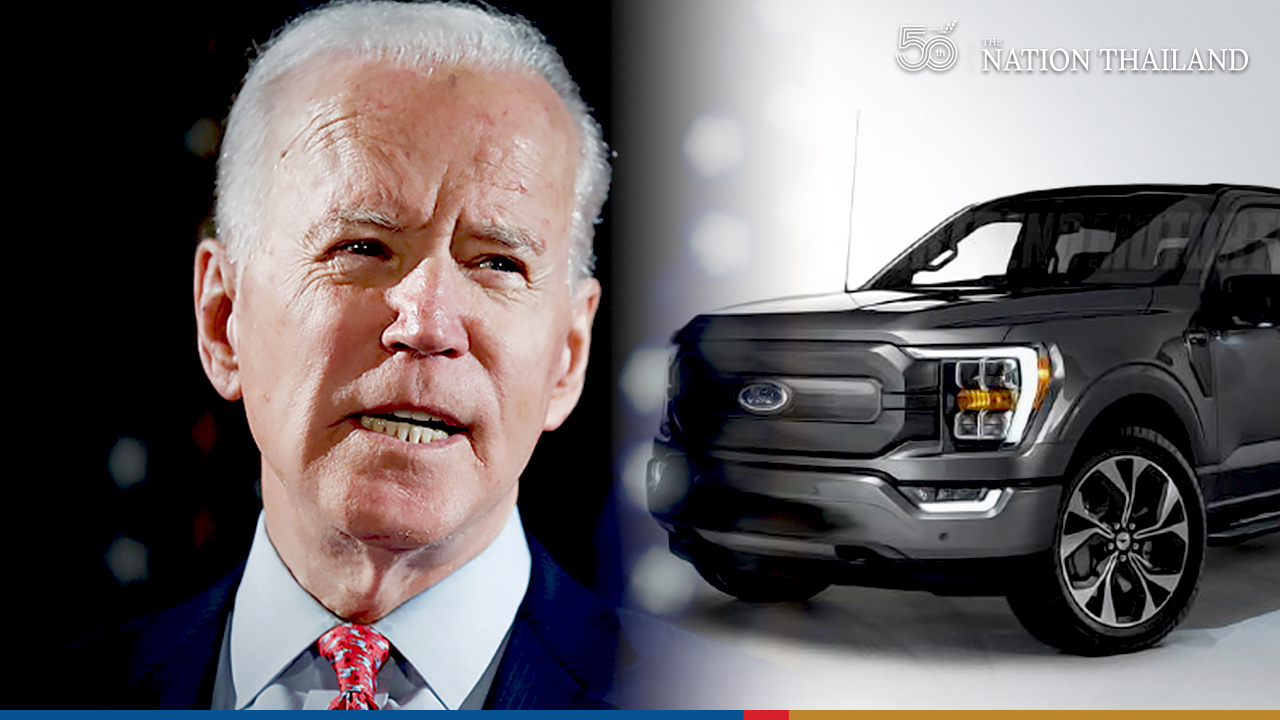 DEARBORN, Mich. - President Joe Biden used the advent of an American-made electric pickup truck to pitch his $2.3 trillion infrastructure package on Tuesday, arguing that the United States needs to make up ground against Chinese auto manufacturers with a jump on the electric vehicle market.

Biden got a sneak peek at the Ford F-150 Lightning, an electric version of the iconic pickup and a marquee product for Ford Motor Co. and its union workforce.

"The future of the auto industry is electric. There's no turning back," Biden said at the Rouge plant, where he also got a chance to test-drive the truck on a track. He floored it.

"This sucker's quick!" he told reporters.

The symbolism of Biden visiting Michigan workers creating a brawny electric pickup is part of the administration's broader argument, to Congress and gas-guzzling motorists alike, that the nation will need to shift away from traditional vehicles faster than many might imagine to make inroads on climate change.

Biden's $2.3 trillion infrastructure plan includes $174 billion to spur electric vehicle development and production, a sum greater than that proposed for rebuilding highways and bridges. That quickly became a focus of opposition by Republicans in Congress who take issue with Biden's broad definition of infrastructure in the bill.

Transportation is the nation's single biggest contributor of U.S. emissions causing climate change, and transportation and environmental experts say shifting millions of drivers toward electric vehicles is a necessary step.

But the vehicles still carry an air of urban exoticism or weakness for many, and are dismissed as impractical by some would-be customers who have not driven them, even as owners of Teslas and other electric vehicles sing their praises.

"I think people hear 'electric vehicle' and they think Tesla, which is a luxury car or froufrou, and they don't think about a hard-working vehicle that everyday people drive and that's the image we need to change," Rep. Debbie Dingell, D-Mich., said in an interview.

Tesla has also introduced an electric pickup truck, and it is taking orders ahead of production, but its design is radically different from that of traditional pickups such as the F-150. Ford rivals Chevrolet and Dodge also have electric pickups in the works.

Dingell, a longtime Biden ally, said she had urged the White House for months to consider using the rollout of the new F-150, which officially occurs Wednesday, as a moment to highlight environmental commitment and American auto manufacturing.

Tuesday's presidential event took on aspects outside automobile production. Dearborn has one of the largest populations of Arab Americans in the country, and Biden's visit was preceded by demonstrations seeking greater U.S. action to rein in Israel as it presses an air campaign against Palestinian militants. The event was planned before the outbreak of violence between Israel and Hamas militants in the Gaza Strip.

Rep. Rashida Tlaib, D-Mich., a frequent critic of Israel, greeted Biden at the airport and spoke briefly with Biden out of earshot of reporters.

"I want to say to you that I admire your intellect. I admire your passion," Biden said near the beginning of his remarks at the plant. "And I admire your concern for so many other people. And from my heart, I pray that your grandmom and family are well. I promise you I'm going to do everything to see that they are, in the West Bank," he said.

"The most popular vehicle in American history is going electric and digital, and it's awesome," Ford said.

More significantly, United Auto Workers President Rory Gamble helped introduce Biden and praised what he called the partnership between the automaker and union workers to revitalize the plant and build the new truck.

"I'm ready for the challenges that the new technology will bring for us, and at the same time protecting American jobs," Gamble said.

Biden, who jokingly began his remarks by saying, "My name is Joe Biden and I'm a car guy," also went off-script briefly to thank the union.

"The UAW elected me," for his first Senate term, Biden said.

There was a strong note of mercantile populism in Biden's address, including a bid for more U.S. manufacturing of electric vehicle batteries and specialty components and a pledge to crack down on U.S. companies that try to skirt buy-American rules.

China is "leading in this race" to develop and build batteries and invest in research toward electric vehicles, Biden said.

"But I got news for them. They will not win this race. We can't let them. We have to move fast, and that's what we're doing here."

Ford's electric Mustang Mach-E, which has been praised by some finicky car buffs, marked an early success in efforts to begin shifting the view of electric vehicles in the American imagination.

The electric version of Ford's nearly omnipresent F-150 workhorse - it is annually a top-selling vehicle - represents an even bigger symbolic move for the U.S. automaker.

In a business where marketing power has long touted how many tons a truck can haul, not how many tons of carbon dioxide it dumps into the air, Ford's launch of an all-electric pickup marks a major shift.

It's a shift that dovetails with Biden's climate push.

Biden has set a goal of cutting total U.S. emissions - including the 1.9 billion metric tons each year from transportation - to zero by 2050, arguing that doing so will help revive American manufacturing, improve quality of life and prevent severe environmental consequences.

But as a White House hungry for a bipartisan win continues negotiating with congressional Republicans on a major infrastructure bill, the immediate future of far-reaching electric vehicle policies has come into question.

Biden's plan calls for major spending on consumer incentives and other policies, and the administration offered new details Tuesday. It said, for example, that the incentives would not go toward "expensive luxury models," according to a White House fact sheet, though how that would be defined remained unclear.

The plan would also provide tax credits for heavy-duty trucks that produce no emissions, in contrast to today's highly polluting diesel versions, and for manufacturing clean vehicles. The administration also proposes grants to spur production of high-capacity batteries in the United States.

Many Democrats in Congress have been adamant that electric vehicles retain a prime position despite whatever infrastructure compromises may come. House Transportation Committee Chair Peter DeFazio voiced frustration last week with GOP objections over electric vehicles.

"I think it's going to take some time to continue to grow the electric vehicle industry in our country," White House press secretary Jen Psaki told reporters traveling with Biden to Michigan.