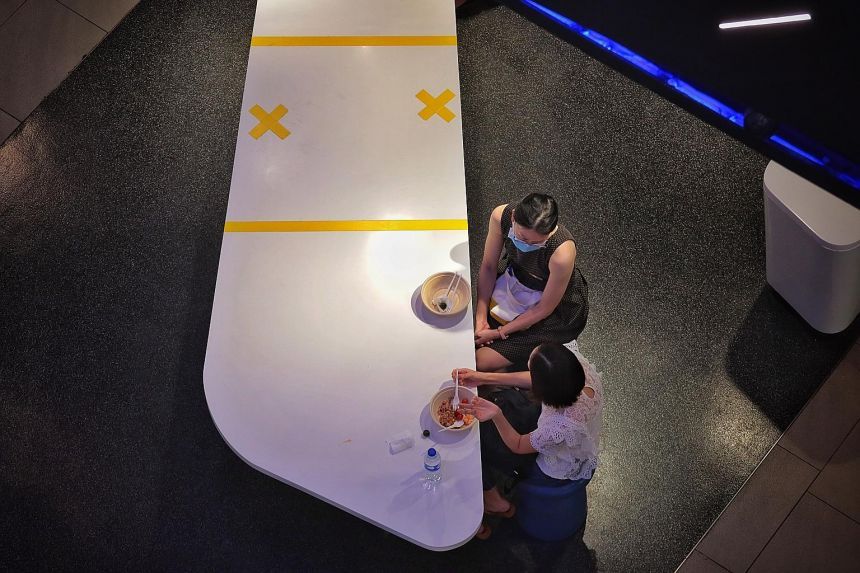 SINGAPORE - New restaurants are feeling the heat from the changing rules for dining in.

Over the last two months, these went from no dining in to two people allowed to five vaccinated people to no dining in again. The latest rule will kick in from Thursday (July 22) to Aug 18 under Covid-19 phase two (heightened alert) of reopening.

Chef-partner Remy Lefebvre, who delayed the opening of Casa Restaurant by Remy Lefebvre at Chijmes until last month, said: "Opening a restaurant is difficult and requires projection and experience, but in this environment, we don't even know what the projections are for next week."

He added: "Moving from a lockdown into a strange one-month opening, and now to another lockdown, our finances are really affected and the mental health of our team has been really affected too."

The restaurant is now banking on its upcoming online gourmet shop with pre-cooked dishes, brunch packages, gourmet pantry products, wine, cocktail pre-mixes and merchandise. The chef said he is reaching out to customers through generic channels like the media, newsletters and personal contacts.

Another new restaurant, Canchita Peruvian Cuisine, which opened in Dempsey Hill on May 15, one day before the previous no-dining-in rule was imposed, said it had been busy building up its customer database since then.

It will push its delivery and takeaway items using that and the restaurant's social media pages. It had also offered takeaway and delivery in May and, said its manager Celvin Chiang, the response was "not bad for a restaurant that had only been open for one day".

But he added: "The multiple changes in dine-in rules have been challenging on the operations front, as we've had to adjust the seating arrangements and call guests to verify their vaccination status."

The 28-seat modern Korean restaurant Nae:um in Telok Ayer Street opened only last month and is experiencing the dining-in ban for the first time.

But its chef-founder Louis Han said: "There is a Korean saying, 'If you cannot escape, just enjoy', so we try to stay positive while we adapt to the changes. With takeaway and delivery, we can potentially reach out to more people even though the offering is a little different from the dine-in menu. This, for us, is the upside of the new rules."

Food wastage will be minimal, he added, as the new dishes will use similar ingredients.

Firangi Superstar in Craig Road is also going through its first experience of having no diners on the premises. The modern Indian restaurant opened on June 25.

Mr Rohit Roopchand, chief executive officer of The Dandy Collection, which owns the eatery, said its menu does not translate well to delivery and in-home dining. The restaurant will instead introduce rolls and bowls. To keep waste to a minimum, it will come up with dishes using ingredients it has in stock.

Chinese restaurant Clan 7 by SF Group, which opened on May 17, launched immediately into takeaway and deliveries. The company also owns the Collin's chain of Western eateries.

Fortunately, said chief executive officer Collin Ho, his team had enough experience in ingredient procurement, staff allocation and marketing initiatives to support the new restaurant. He said: "We are expecting a better response to deliveries this time, as the restaurant is now on delivery platforms such as GrabFood, foodpanda, Deliveroo and Oddle."

The restaurant is also offering a 20 per cent discount until Aug 18, with a smaller menu of dishes suitable for takeaway.