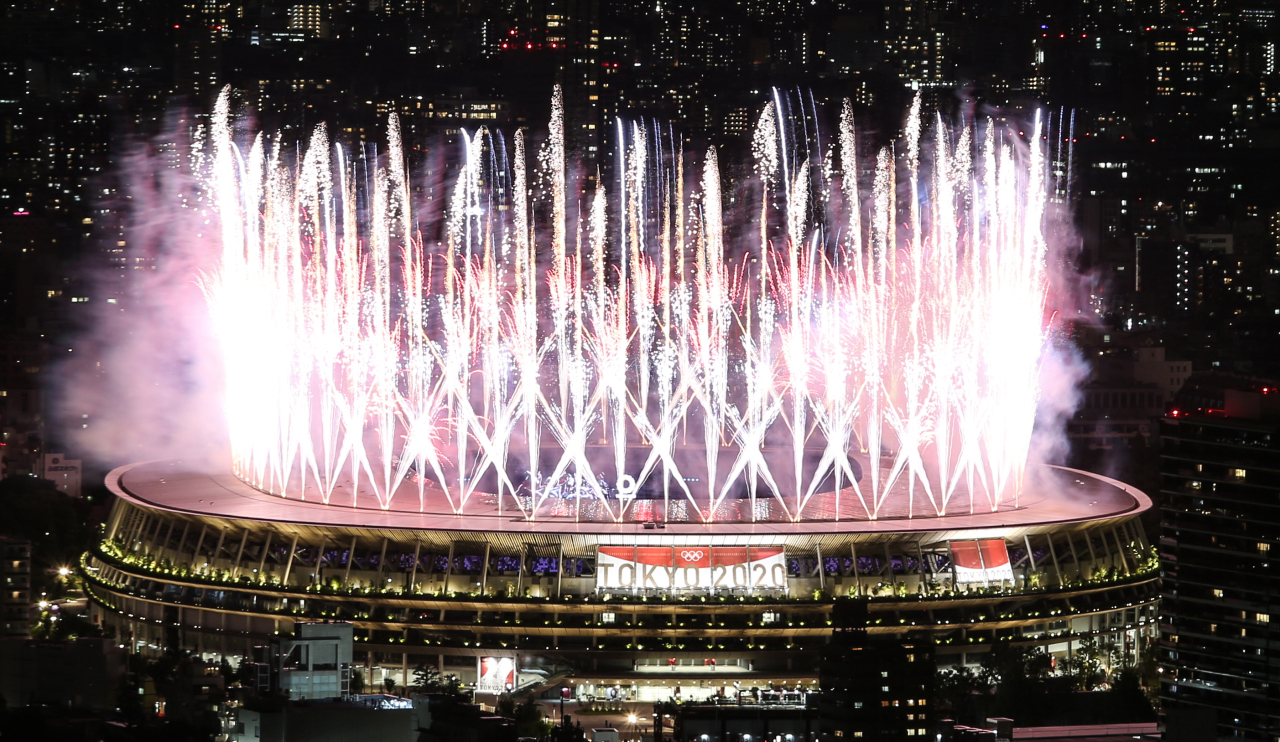 It has been eight years in the making, and the 32nd Olympic Summer Games finally kicked off in Tokyo on Friday, with a sobering, toned-down opening ceremony held at the National Stadium without spectators during the global coronavirus pandemic.

Some 11,000 athletes from 205 countries, plus a team of refugees, will compete for 339 gold medals in 33 sports until Aug. 8, while having to abide by strict health and safety protocols, the likes of which haven't been in place at any of the previous Olympics.

South Korea has sent 354 athletes and officials to compete in 29 sports, with an eye on six to seven gold medals and its fifth consecutive top-10 finish in the medal race.

Volleyball icon Kim Yeon-koung and teen swimming sensation Hwang Sun-woo carried the national flag for South Korea, which was represented by only about 30 athletes and officials at the ceremony.

Tokyo was awarded the right to host these Olympic Games in 2013. It had planned to showcase its recovery from the catastrophic tsunami and nuclear disaster in the northeast of the country in 2011.

Little did anyone know another type of crisis would wreak havoc on Tokyo's grand plans and make these Olympic Games unprecedented on many levels.

The Olympics was postponed by one year due to the COVID-19 pandemic. And with the virus still raging in Japan and around the world, the local organizers and the International Olympic Committee (IOC) decided to first keep international spectators from attending the event, and then took the same step with the domestic fans for events held in Tokyo. The city is under the state of emergency due to a spike in COVID-19 cases.

Competitions held outside the capital city or in regions not under the same state of emergency will be able to accept fans, but only in limited numbers.

Despite steps taken by Tokyo to ensure safe staging of the Olympics, COVID-19 hasn't stopped spreading. The organizers reported 19 Olympic-linked cases on Friday, including three athletes. Since July 1, there have been 106 cases involving Olympic participants.

The buildup to the Olympics has been marred by a series of scandals, including departures of three members of the creative team for the ceremonies. And mounting criticism against the government for prioritizing the Olympics over public health concerns has dampened what little enthusiasm was left for the event. Top corporate sponsors, such as Toyota and Panasonic, didn't send executives.

Then there is the infamous summer heat of Tokyo to reckon with, and Russian archer Svetlana Gomboeva collapsed in scorching conditions on Friday during the women's ranking round. She received medical attention while her teammates put bags of ice on her head to cool her down.

Marathon races have long been moved to the cooler northern city of Sapporo, a decision that looks smarter with each passing day.

Titled "United by Emotion," the opening ceremony was produced on Tokyo's hopes of bringing the world together through sport during the coronavirus pandemic.

However, strict COVID-19 protocols mean athletes and other Olympic participants will not be physically brought together.

Athletes were required to wear masks and maintain safe distancing as they paraded into the stadium. Once the competition starts in earnest on Saturday, medalists will have to pick up their own prizes from the tray and put them around their own necks. And there won't be handshakes or hugs among medalists.

Once the athletes completed their parade into the stadium, Japanese Emperor Naruhito declared the Games officially open, with the Olympic Flag being raised at the stadium. (Yonhap)