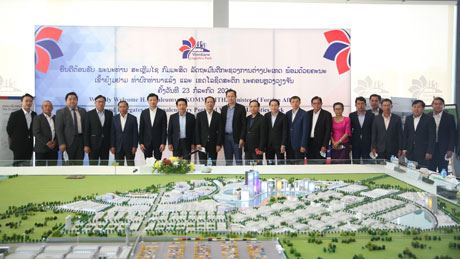 Minister of Foreign Affairs Saleumxay Kommasith on Friday visited the Thanaleng Dry Port and Vientiane Logistics Park. He pledged support for the project after learning that it will significantly facilitate logistics and transport and thus boost trade and Laos’ economy.

Minister of Foreign Affairs Saleumxay Kommasith on Friday visited the Thanaleng Dry Port (TDP) and Vientiane Logistics Park (VLP) as the project prepares for a soft opening next month and linking with the Laos-China railway.

The top Lao diplomat and his entourage were briefed on the significance of the US$727 million project being developed in Dongphosy village, Hadxaifong district, Vientiane.

With the railway, which links the Lao capital of Vientiane with the Chinese border, slated for opening on December 2, the developer of the TDP and VLP told the visiting guests that the railway will link with the project.

As the TDP and VLP are located next to the Laos-Thailand railway station near the first Laos-Thailand Friendship Bridge, the dry port and logistics park are expected to serve as a logistics and transport hub linking the two railways and facilitate trade and investment.

Presenting the project to the minister, TDP Managing Director Sakhone Philangam said it was necessary for Laos to have a dry port and logistics park to facilitate logistics and transport links. “Laos does not have a coastline, so there is a need for an international connecting point,” he said.

Although Lao industry is small, the country is surrounded by large industrial neighbours, thus the project envisions becoming a ‘logistics connector’ among countries in the region, Mr Sakhone said.

The Thanaleng Dry Port tops the list of development priorities in the Lao National Logistics Strategy, an action plan that will drastically transform Laos from being landlocked to a land-linked country.

Being developed on a 382-hectare site, the 50-year concession project is part of the Laos Logistics Link project.

The TDP and VLP are set to connect to a number of mega trade infrastructure projects that are also part of the Laos Logistics Link. These include the Vung Ang seaport in Vietnam’s central Ha Tinh province, which the Lao and Vietnamese governments have agreed to jointly develop, the planned railway to link the Lao capital of Vientiane with the Vung Ang seaport, and the 2,000MV coal-fired power plant in central Khammuan province.

Mr Sakhone said the project would also connect to Asean Highway No. 12 and the Laos-China railway connecting the capital of Vientiane with the Chinese border.

The project is set to streamline logistics and transport procedures and reduce relevant costs, the managing director added.

This would not only make Laos a preferred transit point, but also an international commercially-connected centre.

Landlocked countries need dry ports in addition to other trade infrastructure in order to facilitate trade, former Minister to the Prime Minister’s Office and current President of the Executive Board of Strategy and Planning at the PTL Holding Company Limited, Mr Alounkeo Kittikhoun said, citing advice given by foreign experts.

Mr Alounkeo, who was Chairman of the Group of Landlocked Developing Countries (LLDC) for 1999-2007, said it is envisioned that the Thanaleng Dry Port and Vientiane Logistics Park will be world-class facilites.

The Vientiane Logistics Park is the only comprehensive logistics park in Vientiane and comprises five zones in one location as follows:

1. Thanaleng Dry Port (TDP): The dry port acts as the centre of international import and export trade with all categories of customs operations. Importantly, quality equipment, vehicles and warehouse systems will be installed professionally to enable the processing of larger numbers of containers. Use of the Terminal Operation System (TOS) will guarantee the best service in terms of speed, security and reliability.

2. Tank Farm: This facility will store liquid bulk cargoes for importing and storing fuel from Thailand and will serve as a fuel distribution centre for Laos. Diesel and petroleum products will arrive at the tank from a dedicated rail yard and pipeline in the future.

5. Export Processing Zone (EPZ): The new destination as a modern and the most dynamic EPZ in the region, this will offer a more competitive business environment and will gear up to become a manufacturing export hub for the Asean and global consumer market.

Minister Saleumxay praised the project developer, saying that once it is realised, the project would bolster the government’s land-link effort and increase the competitiveness of made-in-Laos products.

He expressed full support for the project, hoping to see that it is fully realised and can drive the Lao economy.

Also welcoming the minister and his delegation were President of Vientiane Logistics Park Company Limited VLP Co., Ltd., Mr Chanthone Sitthixay, and former Deputy Minister of Finance and now Vice President of the Executive Board of Trade and Regulation, Mr Sila Viengkeo.