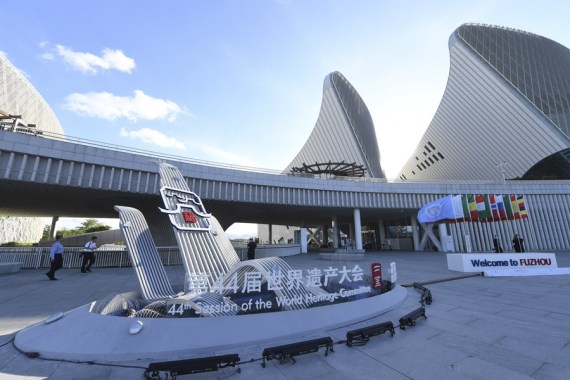 The Hima Cultural Area in Saudi Arabia, the Great Spa Towns of Europe, the Lighthouse of Cordouan in France, the Darmstadt Artists Colony in Germany, and a selection of fresco cycles painted in the 14th century in Italys city of Padua, have been inscribed on the world heritage list.

Five cultural sites in Saudi Arabia and Europe have been inscribed on the world heritage list, the United Nations Educational, Scientific and Cultural Organisation (UNESCO) announced on Saturday.

The decision was made during the UNESCO World Heritage Committee's 44th session held online and chaired from Fuzhou, China.

Hima Cultural Area in an arid, mountainous area of southwest Saudi Arabia won the status as it contains a substantial collection of rock art images depicting hunting, fauna, flora and lifestyles in a cultural continuity of 7,000 years, said UNESCO in a press release.

Travelers and armies camping on the site left a wealth of rock inscriptions and petroglyphs through the ages and until the late 20th century, most of which are preserved in pristine condition.

The spa buildings and facilities of this site "are all integrated into an overall urban context that includes a carefully managed recreational and therapeutic environment in a picturesque landscape" and "embody the significant interchange of human values and developments in medicine, science and balneology," said the committee.

The other sites include the Lighthouse of Cordouan on a shallow rocky plateau in the Atlantic Ocean in France built at the turn of the 16th and 17th centuries as "a masterpiece of maritime signaling"; the Darmstadt Artists' Colony in west-central Germany, established in 1897 as a center for emerging reform movements in architecture, arts and crafts and now "a testimony to early modern architecture, urban planning and landscape design."

In Italy's historic walled city of Padua, a selection of fresco cycles painted in the 14th century by different artists for different types of patron and within buildings of diverse functions, was inscribed because they "illustrate how, over the course of a century, fresco art developed along a new creative impetus and understanding of spatial representation."

The World Heritage Committee session reviews candidates for entry to the list and examines the state of conservation of existing sites. The inscription is scheduled to continue through July 28.