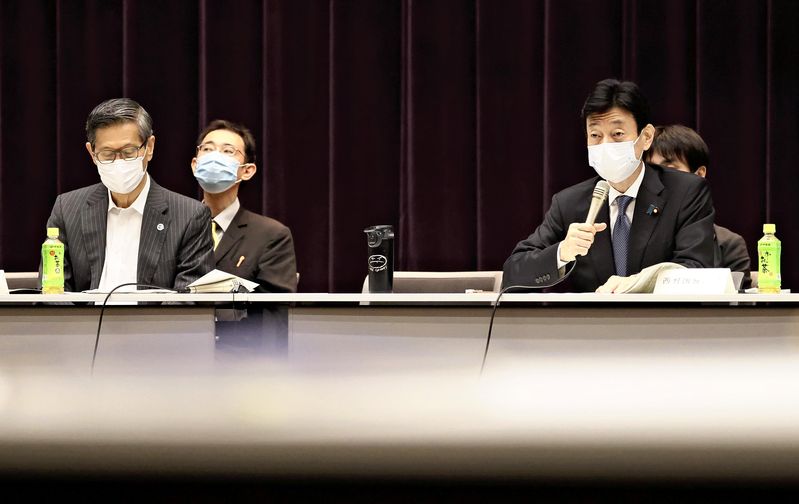 The government decided to expand the state of emergency to the four prefectures of Saitama, Chiba, Kanagawa and Osaka at its COVID-19 task force meeting on Friday, as infections have surged in these areas.

Earlier on the same day, the government’s subcommittee on COVID-19 basic measures approved the plan to declare a new state of emergency for the four prefectures from Aug. 2 to 31.

The decision will increase the number of prefectures under the state of emergency to six, including Tokyo and Okinawa Prefecture, which are already subject to the measure.

During the subcommittee meeting on Friday, Health, Labor and Welfare Minister Norihisa Tamura expressed a sense of crisis about the current infection situation, saying, “We are now entering a new and frightening phase that is different from before.”

Currently, the government has applied emergency-level priority measures to the three prefectures neighboring Tokyo and Osaka Prefecture. These prefectures saw the burden on their medical institutions increase as their number of new infection cases reached Stage 4 — the most serious level, and regarded as a benchmark for declaring a state of emergency. The government took this factor into consideration in adding them to the state of emergency list.

The state of emergency for Tokyo and Okinawa Prefecture was initially scheduled to end on Aug. 22, but it is now expected to be extended to Aug. 31. Restaurants serving alcoholic beverages will continue to be requested to close temporarily in areas subject to the state of emergency.

Additionally, the government plans to apply priority measures to five prefectures — Hokkaido, Kyoto, Hyogo, Ishikawa and Fukuoka — where infections have spread rapidly, from Aug. 2 to 31. In the priority-measure areas, the government will ask for the suspension of the serving of alcohol in principle. Currently, eating establishments that have taken certain measures against the virus are allowed to serve alcoholic beverages on an exceptional basis at the discretion of their prefectural governor. However, the government’s revised basic policy has made the conditions more stringent by allowing alcohol to be served only when infections are trending down.

Some members of the government initially proposed that the state of emergency end on Aug. 22. However, economic revitalization minister Yasutoshi Nishimura, who is in charge of COVID-19 measures, said at the subcommittee meeting, “We want to put [the state of emergency] in effect through Aug. 31, so that we can assess the effects of vaccinations on the working-age population, which have made progress now.”

The government projects that 40% to 50% of the nation’s population will have received two doses of COVID-19 vaccine by the end of August. At present, the number of seriously ill COVID-19 patients in their 40s and 50s has been on the rise. If inoculations progress among people of this age group in August, the infection situation could improve.