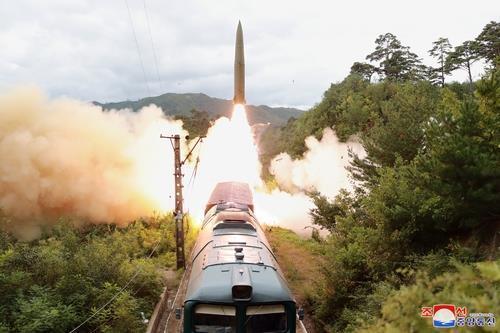 North Korea said Thursday that its ballistic missile test the previous day was carried out by its new railway-borne missile system, stoking concerns over stalled talks on inter-Korean peace.

“For the first time, we tested the viability of our railway-borne missile system to check on the combat readiness and strike capability,” the official Korean Central News Agency said. According to the KCNA, the missiles hit targets 800 kilometers away in the East Sea after being fired from a train.

South Korea’s Joint Chiefs of Staff said the two KN-23s, the codename given for North Korea’s version of Russia’s short-range missile Iskander, flew 200 kilometers longer than in the previous test in March this year. But the JCS declined to confirm whether that was a sign that Pyongyang was testing an upgraded missile.

The launch followed a long-range cruise missile test the previous week. Pyongyang is banned from developing or testing ballistic missiles but not cruise missiles under UN Security Council resolutions.

Moon, who later in the day attended the country’s first test-firing of a submarine-launched ballistic missile, said the launch had been planned and was not a response to North Korea’s launches, highlighting the increasing missile capability will be an unmistakable deterrence against Pyongyang’s provocations.

Kim Yo-jong, sister of North Korean leader Kim Jong-un and deputy director of Pyongyang’s propaganda affairs, immediately lashed out at Moon, calling him foolish for saying that Seoul’s missiles could be a deterrence against Pyongyang’s “provocation.” Kim warned that inter-Korean ties would hit a new low.

Moon’s peace efforts have essentially been in limbo since North Korea demolished an inter-Korean liaison office in June last year, as it protested the way Seoul handles its anti-Pyongyang activists, who flew anti-Kim leaflets over the inter-Korean border.

The two Koreas saw a brief opportunity to revive momentum for a thaw in late July, when North Korea reached out to South Korea to reconnect the hotlines.

But the two neighbors were back to a standoff as Pyongyang quickly returned to escalating tension by accusing Seoul and Washington of trying to build tension with their annual military drills that ended in late August.

Moon is expected to ask for support for his peace efforts at the UN General Assembly on Sunday. Pyongyang has not responded to Seoul’s suggestion that they meet on the sidelines to commemorate their 30th anniversary of UN membership.