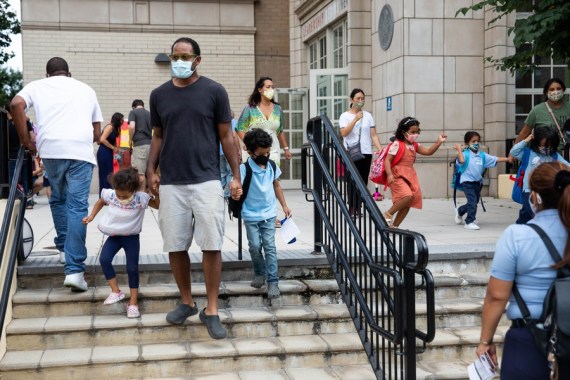 "Many conservatives dont trust the science and feel that vaccines and masks are some nefarious plot, even though the evidence shows those things offer great protection and keep people alive," Brookings Institution Senior Fellow Darrell West tells Xinhua.

Battles continue throughout the United States over mask mandates in public schools, and there is no end in sight amid this bitter debate.

Some parents pushed for mask mandates in schools, while others held that it should be up to parents and pediatricians to determine whether their children should mask up.

The fights have become highly political, in line with the heavy politicization of the responses to the COVID-19 that has killed over 690,000 Americans as of Tuesday, since the pandemic broke out in the country.

Many GOP (Republicans) leaders are trying to ban mask mandates in schools. The state of Florida has been in the national spotlight in recent weeks and months, over Republican Gov. Ron DeSantis slapping a ban on mask mandates, arguing that the decision should be up to parents rather than school administrators.

An appeals court has recently sided with the governor, reinstating his mask mandate ban in public schools, although a lawsuit on the hot-button issue is making its way through the court system.

The First District Court of Appeal in Tallahassee threw out a decision by Leon County Circuit Judge John C. Cooper that had allowed, on a temporary basis, schools to implement a mask mandate.

The U.S. state of Texas has also grabbed national headlines over the issue.

Texas Gov. Greg Abbot is in the midst of a number of political fights with school districts and counties over their efforts to mandate masks in public schools.

Abbot, in an executive order in May, disallowed local governments from implementing mask mandates. But amid the surge of the Delta variant and the slowdown in the vaccination rate, school districts became jittery about the governor's order.

Many other areas in the United States were engaged in similar battles over whether children should be required to wear masks in schools.

The administration of U.S. President Joe Biden has also jumped into the mix, with the Education Department's Office for Civil Rights looking into whether the state is violating the rights of disabled students, who might be at a higher risk of getting sick with COVID-19.

Similar investigations have opened in the U.S. states of South Carolina, Oklahoma, Tennessee, Utah and Iowa.

"Many conservatives don't trust the science and feel that vaccines and masks are some nefarious plot, even though the evidence shows those things offer great protection and keep people alive," Brookings Institution Senior Fellow Darrell West told Xinhua.

As of Sept. 23, over 5.7 million children have tested positive for COVID-19 since the onset of the pandemic, according to the latest report by the American Academy of Pediatrics.

The number of new children COVID-19 cases remains exceptionally high, said the report. Nearly 207,000 cases were added in the week from Sept. 16 to Sept. 23, the fifth consecutive week with over 200,000 children cases being added.

A report published earlier this month from Harvard Medical School found that "most children who become infected with the COVID-19 virus have no symptoms, or they have milder symptoms such as low-grade fever, fatigue, and cough."

"Early studies suggested that children do not contribute much to the spread of coronavirus. But more recent studies raise concerns that children could be capable of spreading the infection," the Harvard report found.

The report also noted the U.S. Centers for Disease Control and Prevention (CDC) recommendation that all teachers, staff, students, and visitors to schools wear masks while indoors, regardless of whether or not they are vaccinated.

In a New York Times article, Dr. Perry Klass, a contributor, quoted a number of children developmental doctors. They found that while many children use facial expressions to communicate, children are very adaptive, and can read other cues if someone's face is masked.

But at the same time, the long-term mental, emotional and developmental effects of small children wearing masks at school remains unknown.

Elane Sadler, an office manager in her 40s in the Washington D.C. area, told Xinhua she thinks children wearing masks at school should be a decision of parents and the children's doctors, rather than "government bureaucrats."

Linda Abbot, a resident of Washington D.C. in her 60s, said she believed children and teachers should be required to wear masks at school.

U.S.-China ties consequential, should be brought back to right track ASAP: Chinese ambassador

COVID-19 deaths trend up, cases down in U.S. as vaccination remains key to combating variant