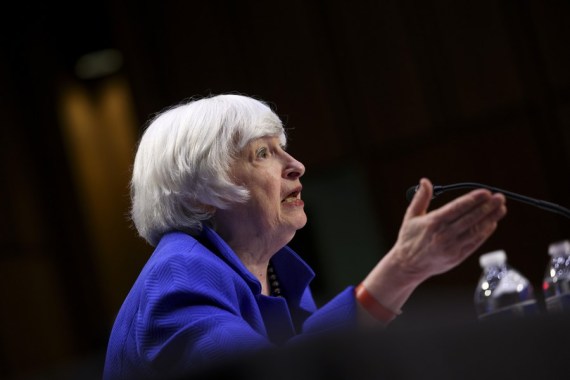 U.S. Treasury Secretary Janet Yellen said on Tuesday that she fully expected the U.S. economy to fall into a recession if Congress failed to raise the federal government's debt limit.

"U.S. Treasury securities have long been viewed as the safest asset on the planet that partly accounts for the reserve status of the dollar and placing that in question by failing to pay any of our bills that come due, we'd really be a catastrophic outcome," Yellen said.

"I fully expect it would cause a recession as well," said the treasury secretary.

Yellen's remarks came after U.S. President Joe Biden on Monday urged the Congress to raise the debt limit, lashing out at Republicans for threatening to use their power to block Democrats' efforts.

Biden also warned that defaulting on the U.S. debt would lead to a "self-inflicted wound that takes our economy over a cliff" and risks jobs and retirement savings.

As part of a bipartisan budget deal enacted in August 2019, Congress suspended the debt limit through July 31. After the debt limit was reinstated on Aug. 1, U.S. Treasury Department began using "extraordinary measures" to continue to finance the government on a temporary basis.

The debt limit, commonly called the debt ceiling, is the total amount of money that the U.S. government is authorized to borrow to meet its existing legal obligations, including social security and medicare benefits, interest on the national debt, and other payments.

Crypto future could soon look a lot like the U.S. dollar

Foreign money secretly floods U.S. tax havens. Some of it is tainted.

Biden says he cannot promise U.S. will not breach debt-ceiling limit: Thats up to Mitch McConnell