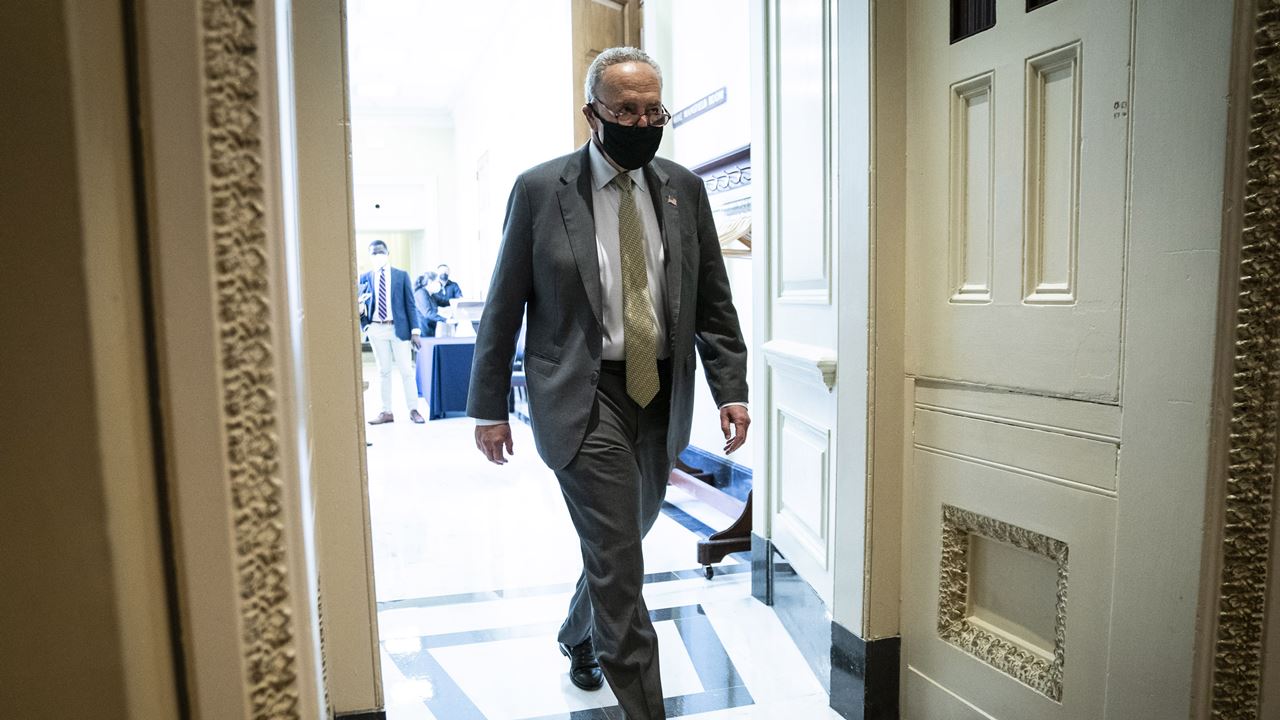 Biden says he cannot promise U.S. will not breach debt-ceiling limit: Thats up to Mitch McConnell

WASHINGTON - A high-stakes standoff between Democrats and Republicans over how to raise the debt ceiling intensified markedly on Monday as President Joe Biden said he could not guarantee that the U.S. government wouldnt default - and Republicans reiterated their refusal to address the issue.

The brinkmanship played out over a series of tersely worded letters and statements between Congress and the White House, with three of the most powerful political leaders in Washington all trying to assign early blame if they do not avert the outcome in the next two weeks. Democrats and Republicans agree that the consequences of inaction would be financially calamitous, but they are at odds over how to proceed.

At the center of the fight is an insistence by Republicans that Democrats alone should be responsible for raising the debt ceiling, with Republicans saying they do not want to help Democrats increase spending. Democrats counter that the debt ceiling must be raised to pay trillions of dollars that has already been promised, bills that increased precipitously during the Trump administration.

The controversy over the debt ceiling comes amid a political battle in Washington over the budget and spending levels, and Democrats have clashed with one another over how much new spending they should authorize. Biden last week called for Democrats to be patient as they try to unify around a single plan, but those talks will be upended if the debt ceiling is not raised soon, because of the expected economic fallout.

Speaking from the State Dining Room, Biden blasted Republicans for not supporting an increase to the country's borrowing cap, calling their stance "hypocritical, dangerous and disgraceful." Twice in the past two weeks, GOP lawmakers led by Senate Minority Leader Mitch McConnell, R-Ky., have blocked the chamber from taking action that would stave off a default in federal debts, prompting Biden to accuse them of pulling a "reckless" political stunt.

Asked after his speech whether he could guarantee the debt ceiling would be resolved, Biden said: "No, I can't. That's up to Mitch McConnell."

Biden's comments came shortly after McConnell issued a fiery statement accusing Democrats in Congress of "sleepwalking toward significant and avoidable danger." In a letter to Biden, the GOP leader added that Republicans have made clear for months now that they would not support an increase to the debt ceiling, as part of their broader opposition to the president's roughly $4 trillion economic agenda. Instead, McConnell called on Democrats to address the issue on their own.

"For two and a half months, we have simply warned that since your party wishes to govern alone, it must handle the debt limit alone as well," he said.

Trying to create new urgency, Senate Majority Leader Charles E. Schumer, D-N.Y., on Monday informed lawmakers in a letter that they must resolve the looming debt-ceiling cliff "by the end of this week" - even if it meant working through weekends.

"We do not have the luxury of waiting until October 18, as it is our responsibility to reassure the world that the United States meets our obligations in a timely fashion and that the full faith and credit of the United States should never be in question," Schumer wrote on Monday. "The consequences of even approaching the X date could be disastrous for our economy and devastating to American families."

Treasury Secretary Janet L. Yellen has told lawmakers that her agency could run out of flexibility to continue making payments on Oct. 18 if Congress does not act.

The exchanges left the country on an uncertain path. In recent history, the government has come close to defaulting, but Congress has always stepped in after the mere prospect rattled financial markets, springing unsettled lawmakers into action.

The federal government spends much more money than it brings in through revenue, requiring it to borrow the balance by issuing debt. Without a congressional response, economists widely agree a breach risks financial and economic havoc, with the federal government potentially forced to miss payments, such as Social Security checks to seniors. A default could even plunge the U.S. back into a recession only months after emerging from the worst economic downturn since the Great Depression.

Seeking to further illustrate the stakes Monday, Biden likened the possibility of a debt default to the prospect of a "meteor headed to crash into our economy." He also warned about the immediate prospect of higher interest rates, stressing that the public could feel the impact this week as fresh financial-market jitters sink in.

"They need to stop playing Russian roulette with the U.S. economy," Biden said of Republicans. "Not only are Republicans refusing to do their job, but threatening to use their power to prevent us from doing our job - saving the economy from a catastrophic event - I think, quite frankly, is hypocritical, dangerous and disgraceful. Their obstruction and irresponsibility knows absolutely no bounds."

Twice in recent days, Senate Republicans have opposed Democratic attempts to raise the debt ceiling, including by voting against a measure that would have funded the government. GOP lawmakers in the Senate are expected to scuttle it a third time if Schumer attempts to move another increase this week that previously passed the House.

Democrats stress they voted several times to raise the debt ceiling during the Trump administration, even when he pursued policies they did not support. During that time, the White House and Congress approved policies that added nearly $8 trillion to the federal debt, including a dramatic increase in military spending, coronavirus relief funds and a big tax-cut package. To emphasize the point, White House press secretary Jen Psaki on Monday displayed a large slide during her daily briefing showing the debt increase during the Trump presidency far outpacing the increase during Biden's tenure.

"Why let McConnell off the hook or Republicans off the hook? I mean, this is their debt, that they chalked up themselves," she said.

In blocking its advance, McConnell instead has argued Democrats instead should use the process known as reconciliation to lift the cap. The tactic would allow Democrats to adopt spending legislation using 51 votes, as opposed to the normal 60 votes required to overcome a filibuster in the deadlocked chamber.

Democrats have resisted this move, which could require them to raise the debt ceiling by a specific amount, potentially exposing them to a flurry of uncomfortable political attacks. Schumer and other Democrats also have described the process as "risky," potentially taking so much time that the country could default before Democrats even finished legislating.

Biden on Monday explained why he does not like the reconciliation pathway, arguing the process would be cumbersome and could take too long to accomplish. The president instead beseeched McConnell to simply allow Democrats to vote on the debt-ceiling hike by not filibustering the measure.

Psaki later clarified that Democrats are not resolute in refusing to use it.

"He wasn't ruling out options," she said.

In his remarks, the president tried to head off any confusion about the debt ceiling's connection to the rest of his domestic agenda. At a moment when Republicans are portraying Democrats as reckless free-spenders and some Democrats have urged more restraint, Biden emphasized that he is not trying to raise the debt limit to finance his sweeping proposals.

The comments were notable as the battle lines around government spending, inflation and how wide the social safety net should be are hardening ahead of next year's midterm elections. Biden and his aides have shown some sensitivity in recent weeks to attacks from Republicans, stepping up efforts to explain rising costs and underscore the ways they plan to finance their ambitious agenda.

But Biden's agenda has slowed on Capitol Hill over disagreements within the president's party. In related comments Monday, the president acknowledged that a massive plan to expand the social safety net would have to be pared down from what he proposed.

"It's going to be less," the president said as he was asked about attempts by centrists including Sens. Joe Manchin III, D-W.Va., and Kyrsten Sinema, D-Ariz., to whittle down its price tag and policy scope. "I need 50 votes in the Senate. I have 48."

The battle over the debt ceiling this week is reminiscent of the high-stakes showdowns in 2011 and 2013 during the Obama administration. Those partisan fights ultimately cost the U.S. economy as much as $180 billion and 1.2 million jobs by 2015, throwing financial markets out of whack and creating business anxiety, one economic analysis found. Fitch Ratings has recently warned that the United States could be hit with a credit downgrade as brinkmanship continues over the matter, which could drive up the costs of borrowing.

The White House has examined unilateral measures to deal with the debt ceiling, even circulating internal memos reviewing the possibility of minting a $1 trillion coin to finance the government's debt. The administration has ruled out those ideas as impractical and likely to still lead to financial calamity.

Congressional Republicans have uniformly backed McConnell's position on the matter. They have pointed to Biden's decision not to vote for raising the debt ceiling while he was a senator. Biden rejected that criticism Monday, arguing his votes were different because they were part of up-or-down votes on measures that passed anyway.

"Biden opposed raising the debt ceiling three times. And now he's sanctimoniously lecturing Republicans about responsibility as he pushes for a $3.5 trillion reckless spending plan," Sen. Tom Cotton, R-Ark., said on Twitter in response to Biden's speech. "Give me a break."