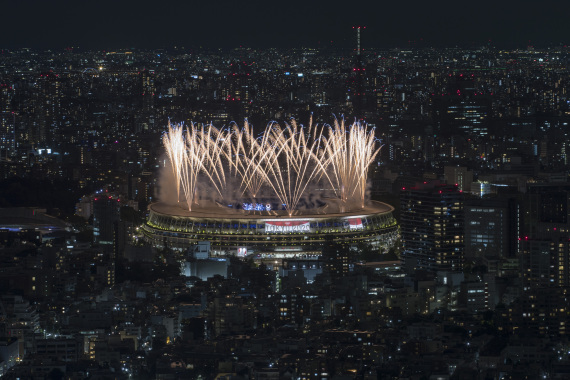 It has been a long journey full of challenges since the Japanese capital was awarded the right to host the 2020 Games. From the coming-together of athletes from 205 NOCs and the IOC Refugee Olympic Team, to the lighting of Olympic Flame, the message was clear: these Games will, hopefully, represent a turning point for the world.

The biggest sporting event on the planet kicked off exactly one year later than originally planned due to the postponement caused by the COVID-19 pandemic.

Japanese Emperor Naruhito declared the Games open at the stadium which only about 950 people including officials and reporters were allowed to enter for the opening ceremony due to the coronavirus.

"Today is a moment of hope," Bach said.

"Let us cherish this moment, because finally we are here, all together. Athletes from 205 National Olympic Committees and the IOC Refugee Olympic Team, living under one roof together in the Olympic Village. This is the unifying power of sport.

"We can only be all together here because of you, our gracious hosts - the Japanese people, to whom we would like to express all our appreciation and support."

Unable to attend the opening ceremony, the 81-year-old Yunus received the award by video link from his home in Dhaka.

The opening ceremony highlighted Japanese tradition with modern culture, while the cauldron was lit by Naomi Osaka after the Olympic flame had traveled to all of Japan's 47 prefectures since late March.

The Olympic flame, probably not "the light at the end of the dark tunnel" yet as envisioned by the IOC and Japanese organizers, at least illuminated the way towards the eventual victory against the virus and challenges brought by it that is sure to come.

It has been almost eight years since Japanese people celebrated the return of the Olympic Games after the 1964 Games, but the journey to this point has been full of challenges.

On March 24, 2020, Japan's then Prime Minister Shinzo Abe and International Olympic Committee (IOC) president Thomas Bach agreed to delay the Tokyo Olympics and Paralympics by one year due to COVID-19, four days after the Olympic flame, which was lit up in Olympia, Greece without spectators, arrived in Japan.

The unprecedented postponement brought about tons of work both for the IOC and local organizers, and undoubtedly extra cost - about 294 billion yen (some 2.83 billion US dollars) - which made it among the most expansive Olympic Games in history to stage.

However, money is perhaps not the biggest problem, compared with the pandemic and controversies over the games.

It wasn't until late Thursday night that the organizers confirmed the opening ceremony will stick to its original programs following the firing of ceremony director Kentaro Kobayashi after a joke about the Holocaust joke he made in 1998 resurfaced.

This was just an array of scandals the organizing committee faced en route to making the Games ready. Ex-Tokyo 2020 president was forced to resign due to sexist remarks in February before former executive creative director stepped down for a remark calling a plus-sized female entertainer and composer an "Olympig," and the composer for the opening ceremony quitting for past bullying behavior.

To make it worse, the coronavirus is still threatening the Games, with Tokyo put under its fourth state of emergency for the duration of the entire Olympic Games. On Thursday, Tokyo 2020 organizers reported 12 new positive COVID-19 cases related to the Olympics, including two infected foreign athletes in the athletes' village, bringing the total number of Olympics-linked cases to 87 since July 1.

This dashed the organizers' last hope of a 10,000 cap for fans decided in late June after banning overseas spectators in March. Consequently, the majority of the venues barred spectators from entering, with cheers and chants from previous games to be put in place as part of the IOC's digital engagement campaign to ensure athletes won't feel alone.

Yet, against all odds, a virtual seed under the ground of the Olympic Stadium sprouted out of the ground after intensive struggles displayed by its human representation inside the arena, starting a countdown that led to the eventual start of the spectacle.

Despite some domestic groups' opposition of holding the Games in the face of the pandemic, Tokyo 2020 organizers have pushed ahead resolutely with hopes of strengthening solidarity around the globe.

"Citizens of the world and the people of Japan are with us in spirit as athletes from around the globe gather here at the Olympic Stadium in Tokyo under the Olympic flag. Here is a vision for the future, one that embodies 'Unity in Diversity', one of peace and respect for one another. This is the power of sport, and an expression of the fundamental values of the Olympic Movement. This is its essence," said Tokyo 2020 President Seiko Hashimoto.

A LOOK INTO FUTURE

This is probably the first time in Olympic history that audience in front of the screen got to enjoy the show more than those very limited number of IOC stakeholders who were present in the stadium. Applying high technology including virtual and augmented reality, Tokyo 2020 sought to fulfill its goal of "Discover[ing] Tomorrow," the slogan that guided the city's winning bid.

A creative show of sport pictograms, which was an innovative design by the Tokyo 1964 organizers and became part of the Olympics ever since, enabled TV viewers to jump between virtual life and reality.

The history of pictograms were reviewed in a video clip before the little blue man of Tokyo 2020 ones walked out of the screen and began acting the logos out one by one rhythmically on the stage to a dynamic music, and switched to hand tricks inside a virtual studio. The show then came back to stadium again with the pictogram of triathlon wrapping up the 33 sports of the Tokyo 2020 program, before the three performers stood on the podium celebrating their victory.

Through the eyes of 100-year-old Agnes Keleti, the oldest living Olympic champion and medalist, the audience saw how the sporting showpiece traversed over a century inspiring generations after generations, and is now embracing the future.

Skateboarding, surfing, karate and sports climbing are included in the Olympic program in Tokyo. Thirteen-year-old skateboarder Sky Brown, one of the youngest Olympians at Tokyo 2020, and her young counterparts all over the world represent the future of the games.

For host Japan, the Olympics is a chance to showcase the recovery of the tsunami-devastated northeastern coast after 10 years, with the country's widely-loved softball and baseball games to be held in Fukushima.

"Ten years ago, when we decided to bid for the Olympic Games, many people in Japan faced profound difficulties, and were in mourning following the massive Great East Japan earthquake and tsunami. Many of the affected communities were losing the will to pick themselves up and move forward. People from all over the world extended a helping hand, encouraging us to 'Move forward together!'" said Seiko Hashimoto.

"Now, 10 years later, we can show you the extent of Japan's recovery. We are most grateful to all of you."

In line with the Olympic Agenda 2020's focus on sustainability, Tokyo 2020 also marks the first Olympics to be carbon neutral and to run entirely on renewable energy. Recyclable cardboard beds and medals made from small electronic devices collected nationwide were among the efforts the organizers took to be environmentally-friendly.

The Tokyo Olympic Games, attracting 11,000 athletes from 205 delegations and the refugee team, will run through August 8.

China has dispatched a 777-member delegation to Tokyo, its largest ever participation in an overseas Games. The 431 Chinese athletes, including 24 Olympic champions, will compete in 30 out of 33 sports in Tokyo.