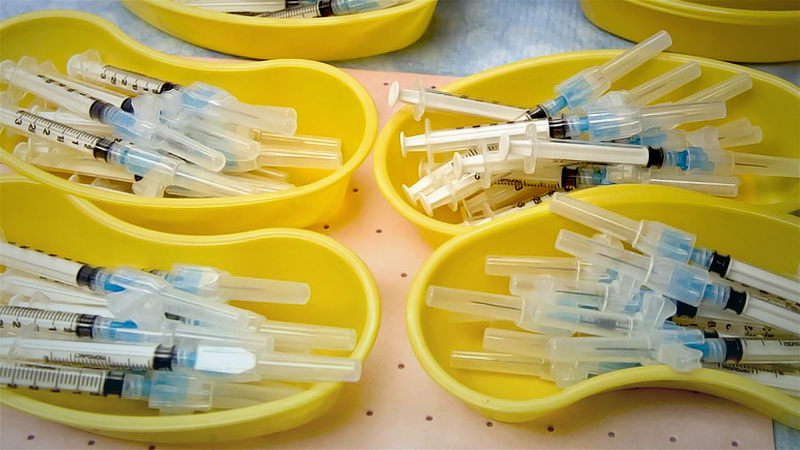 Doses of the Moderna covid-19 vaccination at a drive-thru clinic at the Richard M. Borchard Regional Fairgrounds in Robstown, Texas, on Jan. 26, 2021. MUST CREDIT: Bloomberg photo by Eddie Seal.

The Biden administration's move Tuesday to boost the supply of covid-19 vaccines in coming weeks amounts to opening the faucet a little wider: Even with the extra flow, demand for the shots will still swamp supply for months unless the U.S. can open another spigot.

President Joe Biden said the U.S. would ship at least 10 million doses for the next three weeks, a 16% increase over the current level. That pace means tens of millions of Americans who are now eligible for the shot -- those 65 and older in many states -- will still have to wait.

The new purchases are being made under options from the federal government's existing contracts with the companies and will be paid for with funds Congress previously allocated, according to a person familiar with the situation.

Yet even with the added supply, the number of Americans who are vaccinated in the months ahead may ultimately be determined by the number of doses provided by drugmakers.

On Tuesday, Pfizer Chief Executive Officer Albert Bourla said in an interview that the company will be able to supply the U.S. with 200 million Covid-19 vaccine doses by the end of May, two months sooner than previously expected. That's because of a change in the vaccine's label that allows health-care providers to extract an additional dose from each vial.

Still, the best chance for a dramatic increase in supply may come in the weeks ahead, as Johnson & Johnson prepares to ask U.S. regulators to clear its experimental Covid-19 vaccine for emergency use.

As he was announcing the supply increase, Biden played down expectations for vaccines to bring a swift end to the pandemic, urging Americans to wear masks and warning that the U.S. will reach 500,000 deaths next month.

"The brutal truth is it's going to take months before we can get the majority of Americans vaccinated -- months," Biden said Tuesday at the White House.

Biden, who has been in office for one week, is building on the vaccine rollout started by former President Donald Trump under the Operation Warp Speed program.

The U.S. has administered the first dose of the two-shot vaccines to more than 20 million Americans. Even using the entire near-term supply of 10 million doses a week, it would take months to inoculate the more than 200 million Americans prioritized for the first phases. That includes all essential workers, people 65 and older, and adults with medical conditions.

In December, before vaccinations started, Biden pledged to deliver 100 million shots in the first 100 days of his presidency. The U.S. surpassed that pace in the first days of his administration, essentially letting Biden start at his own finish line. The country has administered 23.5 million Covid vaccines and is vaccinating people at a rate of 1.25 million a day in the past week, according to the Bloomberg Vaccine Tracker.

That's led some to call the initial goal too modest. Biden said Monday that he thinks the U.S. can reach 1.5 million vaccinations per day during this period.

The White House walked back a prediction Biden made Monday that any American who wants a shot could get one in the spring. Instead, Anthony Fauci, a Biden adviser and the nation's top infectious disease doctor, said eligibility will open then but the process of vaccinations will stretch on for months.

"Everybody won't be eligible this spring, as you all know, even as the CDC continues to provide updated guidance," White House Press Secretary Jen Psaki said Tuesday.

Biden has made curbing the pandemic his top priority and is pressing Congress for a $1.9 trillion aid package, which includes more funding for vaccination efforts. Republicans have so far been cool to the proposal, and Senate Majority Leader Chuck Schumer said Tuesday he will begin advancing a version that can pass with only Democratic votes next week if there isn't a breakthrough.

J&J could report efficacy data from a late-stage trial of 45,000 participants before the end of the week. The drug giant's vaccine would be the first to offer its full protection with only one shot, simplifying mass vaccination efforts.

According to J&J's top scientist, U.S. regulators could authorize it for emergency use in March. The still-experimental vaccine generated a long-lasting immune response in an early safety study, published in the New England Journal of Medicine earlier this month. That provided a glimpse at how it may perform in the real world.

J&J aims to have a total of seven manufacturing facilities, many of which are contract manufacturers, up and running by the end of the second quarter, Chief Financial Officer Joseph Wolk said in an interview Tuesday.

On the demand side, many states have prioritized vaccination to those 65 and older, a move encouraged by both the Trump and Biden administrations. That decision, intended to keep vaccines from lingering unused, now means that there's not nearly enough for everyone who qualifies.

A 16% increase in the existing supply is "not going to make much of a difference to us at all," Maryland Gov. Larry Hogan said in a news conference Tuesday, before Biden's announcement.

The new supply "will move the needle some," said Houston Health Department Director Stephen Williams. "The reality is that we will be in better position when one or two more vaccines get approved so we'd have more sources to access."