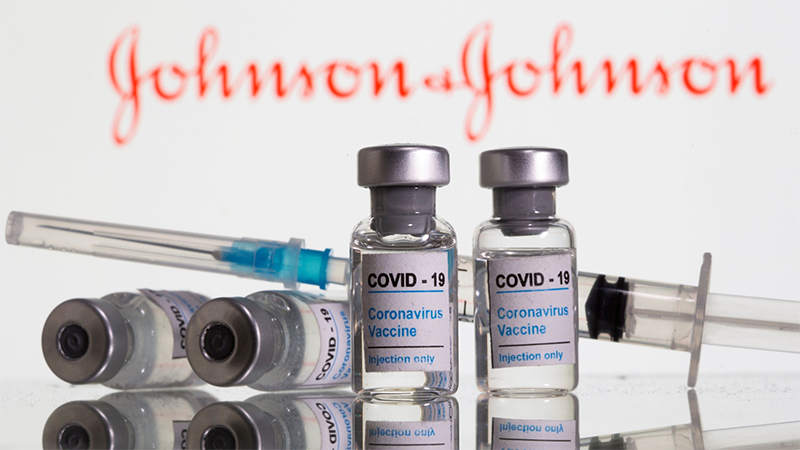 The Food and Drug Administration authorized Johnson & Johnson’s coronavirus vaccine for emergency use for people 18 and older on Feb. 28. (Reuters)

WASHINGTON - A federal advisory panel voted unanimously Sunday to recommend the nation's third coronavirus vaccine for people 18 and older, opening the way for the one-shot, easier-to-use Johnson & Johnson vaccine to be administered starting this week.

Meeting in emergency session, advisers to the Centers for Disease Control and Prevention strongly endorsed the vaccine's effectiveness in completely protecting against hospitalization and death. The Johnson & Johnson vaccine is the first one authorized in the United States that does not need to be kept frozen or followed by a second shot.

The clearance of a third vaccine comes at a critical time in the pandemic: After weeks of steadily declining new cases in the United States, the downward trend has stalled - "a very concerning shift in the trajectory," CDC Director Rochelle Walensky said Friday. Experts worry that state and local officials are relaxing restrictions too quickly, and people are letting down their guard even as more contagious and possibly, deadly virus variants are on the rise. It was almost one year ago that authorities announced what was believed to be the first coronavirus death in the United States. Since then, more than 500,000 deaths of covid-19, the disease caused by the coronavirus, have occurred in the United States.

"Covid cases and deaths are decreasing," said Beth Bell, a global health expert at the University of Washington who leads the panel's coronavirus vaccine working group. "But the pandemic is very far from over and many challenges are before us. The need for more safe and effective vaccines remains urgent and vital to ending the pandemic."

The action by the Advisory Committee on Immunization Practices follows the Food and Drug Administration's action Saturday in authorizing the vaccine for emergency use for people 18 and older. Walensky is expected to approve the panel's action shortly after the vote, making it an official CDC recommendation to health providers.

The doses are expected to start shipping as early as Monday to sites already receiving doses of the authorized vaccines made by Pfizer-BioNTech and Moderna. Those locations include state health departments, pharmacies, federally qualified health centers and community vaccination centers.

Johnson & Johnson's initial supply will be limited - nearly 4 million doses are expected to be shipped this week, and an estimated 20 million doses by the end of March, officials have said. But state officials already know what to expect because the number of anticipated doses for all three vaccines was included in information they received last week.

The Johnson & Johnson vaccine was 85% effective at protecting against severe cases of illness in late-stage trials, and there were no deaths or hospitalizations a month after participants received the vaccine. The vaccine was slightly less effective at preventing moderate illness (72% effective in the United States) where more-transmissible variants have only recently begun to be detected. Some experts are worried that the public will fixate on that data point and pass up getting the Johnson & Johnson shot in favor of other vaccines that underwent trials at an earlier stage of the pandemic when such variants were not a factor.

Panel members said that doing so would leave people unprotected and delay an end to the pandemic.

Officials stressed that vaccines were tested at different times, against different circulating variants and in settings with different levels of transmission.

"While there are differences in efficacy of the three vaccines for moderate illness, the more severe the outcome, the more similar the efficacy," said Saad Omer, director of the Yale Institute for Global Health who is not a member of the panel. "In other words, we now have three highly effective vaccines available in the U.S. - particularly against severe outcomes such as hospitalization and death. This one-dose vaccine, that can be stored at refrigerator temperatures, is likely to enhance the ability of health departments and health systems to conduct mass vaccination. The rate limiting step remains availability of doses."

Members and immunization advocates expressed concern that information about the vaccine's efficacy will be confusing for the public and make it even more difficult to get shot to hard-to-reach communities.

"We need some real plain language and clear public education on the difference between clinical trial efficacy and real world effectiveness," Karen Ernst, who heads Voices for Vaccines, a parent advocacy group, said during the public comment period.