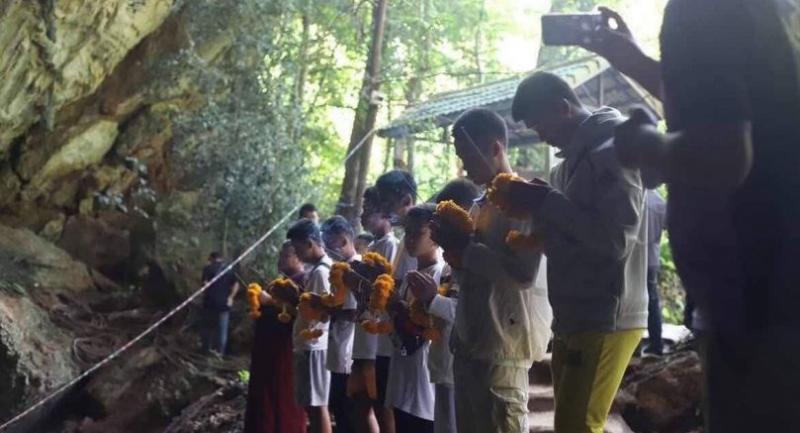 Stampede for the cave drama scoop

Producers of movies, games, and books are queuing to see who gets a share in the Tham Luang story

After Hollywood studio Universal Pictures was reported acquiring the rights to make a movie about the Tham Luang cave rescue, the Culture Ministry is insisting that no such rights have been granted to anyone.

Culture Minister Vira Rojpojanarat said on Wednesday that the “Creative Media Panel” the government established for the purpose would hold an open call from November 15-23 for submissions for rights to make movies about the cave drama, as well as for depictions in all other media.

Several Hollywood-based and Thai studios were swift to pitch plans for feature and documentary films about the cave rescue, with games-makers joining in the frenzy to depict an event that caught the world’s attention.

Vira said the government was “representing” the 12 youngsters rescued from the Chiang Rai cave, along with their coach and their parents, to protect their intellectual property rights. The panel, set up in July, has officials from the culture, tourism, foreign affairs and human development ministries and reputable figures from the Thai film industry.

To date there are 22 movies, a TV series, animated games, music videos and books in the works, Vira said. Five foreign film studios and five in Thailand are proposing feature movies and 10 documentary projects have been touted by companies at home and abroad. Three projects involve books and music videos, and Thai and foreign news media have extended invitations to the boys and their coach to be interviewed on 27 different TV programmes.

Vira said local moviemakers could make their pitches to his Culture Ministry, while foreigners have to submit their proposals to the Tourism and Sport Ministry. The Creative Media Panel is also tasked with screening the information flow to and from the boys and safeguarding both their privacy and the country’s image. Once rights are granted to specific film projects, it will also oversee production.

The panel will help the families negotiate contracts with foreign studios, Vira said, with careful attention paid to their intellectual property rights. The restrictions on rights do not apply to the use of information already in the public domain, he said. Vira did not name any studios interested in the Mu Pa story, but it was widely reported that Universal Pictures had sealed a deal with the boys and their coach, Ekkaphol Chantawong, as well as Australian cave divers Dr Richard Harris and Craig Challen.

The Wall Street Journal reported that Universal had offered $1.5 million (Bt49 million) to be split among the boys and Ekkaphol. It listed Dana Brunetti and Michael De Luca as producers, a duo previously associated with box-office hits “Fifty Shades of Grey”, “Captain Phillips” and “The Social Network”.

Despite the report, panel members have insisted that no studio had as yet been granted the rights to produce a film about the cave rescue. Ekkaphol has also been quoted as saying he has accepted no such deal. “But we are not sure if Universal Pictures bought the rights from the Australian divers,” panel spokesman Lt-General Weerachon Sukondhapati-pak said.

At least three other major foreign studios have expressed interest in producing movies. De Warrenne Productions, headed by Thai-Irish producer-director Tom Waller, recently announced plans for a movie titled “The Cave”. He was looking for distributors at the Toronto International Film Festival. It was Waller who made the award-winning films “Mindfulness and Murder” and “The Last Executioner”.

Pure Flix managing partner Michael Scott and co-producer Adam Smith interviewed people around the cave in the immediate aftermath of the rescue in early July. Their firm is known for Christian-theme movies like “Do You Believe?” and the “God’s Not Dead” series and they hope to focus on the inspirational aspects of the rescue operation. “Now You See Me 2” director Jon M Chu and Ivanhoe Pictures meanwhile announced they were teaming up for a movie about the incident. “There’s a beautiful story here about human beings saving other human beings,” Chu said on Twitter.

The cave rescue drama that began on June 23 held people across the world spellbound as efforts to locate the Wild Boar team were repeatedly stymied by rising water levels and strong currents. Thai Navy Seals, joined by a slew of foreign professional divers including Australians Challen and Harris, coordinated the complicated operation. One former Navy Seal, Lt-Commander Saman Kunan, lost his life in the operation. The boys and their coach were all safely extracted by July 10.