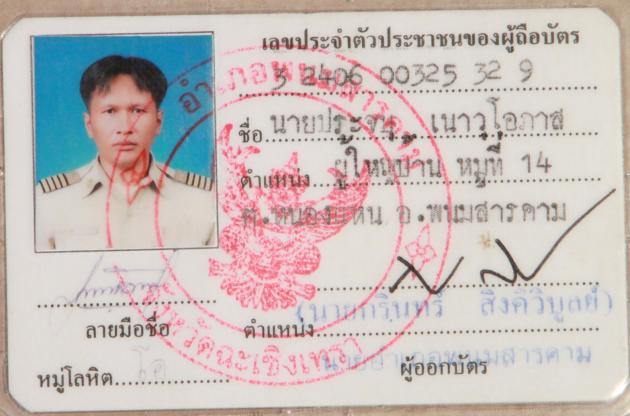 The battle against the illegal disposal of toxic waste took an ugly turn in Chachoengsao's Tambon Nong Nae this week, where locals have been fighting a three-year battle against firms in industrial estates outside their village.

On Monday afternoon, village headman Prajob Naowa-opas,43, was shot dead while waiting to get his car at a garage behind the local department store.
Prajob was a village leader who stood up to fight against the disposal of toxic and industrial waste being dumped in the area.
“He was a nice guy. He had no problem with other people,” his older brother Jon Naowa-opas, 46, said.
Villagers have protested against the disposal of toxic and industrial waste in the area – on Bangkok’s eastern fringe – for three years.
Jon said many villagers were affected, especially those with animal farms hit by pollution from a toxic waste disposal site.
Chachoengsao has about 11 toxic waste disposal sites located in the province. Some of these have released hazardous substances that can cause cancer into a natural reservoir which local people use for drinking water and their daily lives.
Provincial public health officials have found many reservoirs in local areas are tainted with hazardous chemicals that can cause cancer at levels 20 to 30 times standards deemed safe. Local health officials later announced a ban on people using water from the reservoirs.
“Our farms were affected and many animals died from unknown causes,” Jon said.
In Nong Nae village in Phanom Sarakham district, there are nine sites for the disposal of industrial waste. But only a third of them are legal.
Villagers found that a private recycling company had bought an abandoned pond in which to illegally dispose of waste from Amata industrial estate in Chon Buri since February last year.
Due to pollution problems across the province, over 3,000 villagers gathered in a protest to call for the Pollution Control Department, Industrial Works Department and Department of Special Investigation to investigate the illegal disposal of toxic waste at the site.
Companies or people involved in waste disposal, or dumping, appear to have been plotting revenge.
Jon said: “We have been spied on since protesting over disposal sites. Some people have taken our photo and asked about us.”
Despite this, there has been no protection for villagers fighting against groups illegally dumping waste at disposal sites.
With local people having asked relevant authorities to provide help to eliminate pollution from toxic waste disposal sites, local officials drafted a plan to eliminate toxic waste being dumped in the area.
However, the plan was contested by a group of disposal companies. They wanted to eliminate pollution in toxic waste by spraying it with special chemical substances and trying to reduce the bad smell. They also wanted to build an embankment around disposal sites and to treat tainted water retained at the sites.
But local people feared these moves would just provide a cover at disposal sites instead of actually eliminating toxic waste.
To date, some toxic waste disposal sites have been covered up since last year but there are still illegal disposal sites in the area.