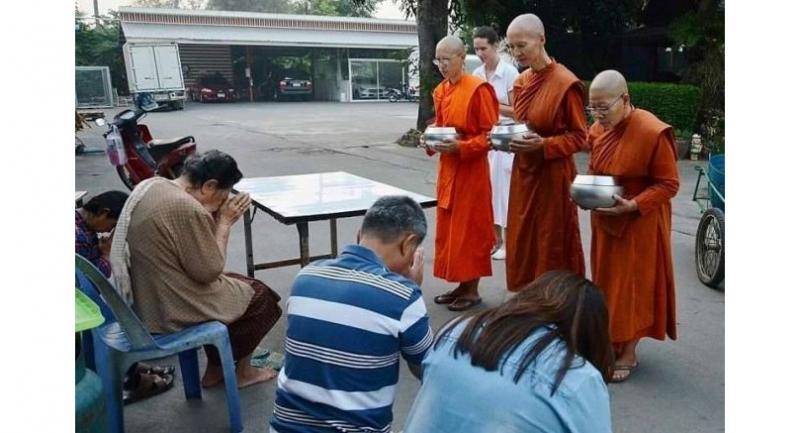 By By The Straits Times - Asia News Network

The pleasantries are petering out as my taxi hurtles along the highway. My jocular driver quizzes me about the temple where I am headed.

"It's a temple run by female monks," I tell him.

He pauses at this unfamiliar concept before asking: "Do they receive alms?"

Saffron-robed women are a curious entity in Buddhist-majority Thailand, where men are commonly ordained as a rite of passage, and where villagers cook food to offer as alms each morning.

This is not so much because there are only about 100 female monks nationwide - compared with some 300,000 male monks. It is because officially, they do not exist.

Thailand's monastic authority, the Supreme Sangha Council, does not recognise bhikkunis, the term used for female monks. The male equivalent is bhikkus.

It reasons that since monastic rules require women to be ordained by both bhikkunis and bhikkus - and the lineage of bhikkunis under the orthodox Theravada branch of Buddhism practised in Thailand is extinct - ordaining a female monk is wrong.

"It is not that we don't recognise women's abilities. And it is not about human rights," Phra Methithammajarn, a vice-rector at the monk-administered Mahachulalongkornrajavidyalaya University, tells The Straits Times. "It is about monastic discipline."

What this means is that while foreign bhikkunis ordained under the Mahayana branch of Buddhism common in China, Taiwan and Singapore are recognised as monastics in the kingdom, Thai bhikkunis are still referred to as "Miss" or "Mrs" in identification cards that bear photographs of them with shaven heads and donning monastic robes. Their temples do not enjoy tax-free status, and they do not receive financial support that the state gives to senior monks.

Officially, the closest women can get to monkhood in Thailand is by donning white robes, shaving their heads, vowing celibacy and living the life of an ascetic as a mae chee or lay nun. Like monks, mae chee cannot vote, but they occupy a lower status and do not receive monastic benefits.

Yet the number of Thai bhikkunis - aided by Theravada ordinations carried out in Sri Lankan temples - has been growing. They are now scattered across provinces like Chiang Mai in the north, Yasothon in the north-east and Songkhla in the south.

Tensions came to the fore last December when a group of bhikkunis tried to pay their respects to the late King Bhumibol Adulyadej, whose body has been lying in Bangkok's Grand Palace since his death in October.

A palace official gave them the green light prior to their visit. When they arrived, they were confronted by another official who declared them "illegal" and suggested they swop their saffron robes for black mourners' attire to join the lay people's queue.

In response, an aide to the abbess of the temple involved, Songdhammakalyani monastery, lodged a petition with both the National Human Rights Commission as well as a state panel called the Committee on Unfair Gender Discrimination Complaints. Both agencies have yet to announce their findings.

Residents living near temples with bhikkunis have been far more welcoming.

On a Sunday morning at Songdhammakalyani monastery, about an hour's drive from Bangkok, the clang of a temple bell at the crack of dawn draws more than a dozen bhikkunis and female novices out into the prayer hall. Shortly after, three of them head out to nearby villages cradling alms bowls.

Their brisk pace is broken only when they spot people kneeling by the road with their palms joined in respect.

At each stop, they chant blessings for the devotees offering rice, bread, green curry, vegetarian noodles and even a colossal jackfruit. It takes less than one hour for the alms to fill the cart of the temple assistant trailing behind.

Songdhammakalyani's abbess, 72-year-old Dhammananda Bhikkuni, was the first Thai woman to receive a full Theravada ordination in Sri Lanka in 2003. During a religious lecture she conducts that Sunday morning, she relates how someone once likened her work to a "crack" on the "wall" of patriarchy.

"We all have to help, to be those small cracks on the wall... to make it collapse," she says.

"Then we can see the Buddha on the other side, with arms wide open, welcoming those daughters who are ordained."

In a quiet corner of the temple later, the former Buddhist philosophy scholar from Thammasat University tells this reporter that she is not the type to "open war fronts".

"But I get the issue across."

Abiding by the monastic code of conduct, she refrains from criticising her male counterparts in front of lay people, even though she is often asked about their conduct at the many forums she attends.

But when pressed, she says she hopes the Buddhist world would focus more on building character than on erecting elaborate temples.

"I intend to... build up the quality of the monastics rather than build structures," she says.

Dhammananda Bhikkuni, who zips around the monastic compound on a three-wheeled electric scooter, says her all-female temple in Nakhon Pathom province is not really out to prove that women can do better. But it conducts what it calls socially engaged Buddhism, by reaching out to prison inmates, planting organic vegetables and running a drop-in centre for recyclable items.

While seeking recognition for female monks, Dhammananda Bhikkuni is wary about the kind of control the nation's male monastic elders can exert over them should they decide to let women into their fold.

"That would be difficult," she says. "We don't want to get in there."

The more outspoken critics, such as former Bangkok Post editorial pages editor Sanitsuda Ekachai, have slammed the clergy for its "authoritarian and feudal system", where a steeply hierarchical order remains largely unaccountable despite temples receiving billions of baht in donations every year.

Recent headline-grabbing accounts of monks taking drugs, having sex and flying on private jets with luxury bags have done little to shore up the image of the clergy.

Meanwhile, the former abbot of Thailand's largest temple has repeatedly defied summonses over fraud allegations, triggering a three-week-long stand-off between thousands of devotees and security personnel.

Women who take up the monkhood face not just opposition but confusion from friends and relatives. Samaneri Dhammarajata, 57, who became a novice at Songdhammakalyani last year, recalls being asked: "What do I call you after you are ordained? Mae chee?"

No one insulted her though. "They don't, because they don't know we exist," the former accountant says wryly.

Followers of bhikkunis interviewed say they are often drawn by their single-minded devotion to the religion.

At Suddhajit Bhikkhuni Arama, a meditation centre about 30 minutes from downtown Chiang Mai and headed by 62-year-old Nanthayani Bhikkhuni, the businessmen, educators and civil servants interviewed describe their teacher as someone who earned their respect with her austere lifestyle and deep insights. The former lay nun was ordained as a bhikkuni in Sri Lanka in 2008.

"I felt a bit awkward at first when she taught us," engineer Narong Thammachai, 52, admits. "We are more familiar with male monks. Nuns for me were those who cook and serve monks in the temple."

But his doubts soon dissipated. "Her teaching guided me from uncertainty," he says.

Bhikkunis interviewed are careful not to set themselves apart from male monks, given that some bhikkus support their activities.

But university don Phra Methithammajarn says most bhikkus usually to try to avoid associating with bhikkunis, because there are no rules governing the interactions with a community that officially does not exist.

"If they meet (bhikkunis) in public, they try to avoid them," he says. "The bhikkus are not familiar with them and don't know how to act."

In the face of this gap, bhikkunis find their own ways to create solidarity. Ayya Visuddhi Yana, a 69- year-old former environmental biology professor who was ordained three years ago at a network of temples called Buddhacatuparisa, says her fellow bhikkunis try to share the alms they receive with monks from nearby temples.

"We don't want money," she says. "What we want is for the government to say there are bhikkunis."